Stocks are slowly falling today, finishing out the week on another “milk toast” trading session. Investors went absolutely mild this morning as offsetting headlines kept both bulls and bears at bay.

In a pre-market Bloomberg News report, it was revealed that China would increase its purchases of U.S. farm products to meet the terms of the previously agreed-upon phase one trade deal. Some analysts saw it as the first de-escalation of many between the two nations.

Others aren’t as hopeful.

Still, with President Trump facing re-election, the White House seems prepared to do anything and everything to secure a bull market.

“Retail sales V-bound, employment V-bounds, equities V-bound and meanwhile central banks continue to underpin just about everyone and their mother. What is not to like?” Larsen wrote.

That doesn’t mean it’s been all good news this week, however. Covid-19, the ever-present bearish boogeyman, is lingering.

And if the recent data out of Texas, California, Arizona, and Florida is to be believed, another outbreak may soon arrive.

“The rally of the past few months may have led to stocks reaching within striking distance of record highs, but investors are struggling to reconcile upward momentum and less optimistic messages about the months ahead,” Lindsey Bell, chief investment strategist at Ally Invest, said.

“That, along with concerns about a second wave of coronavirus and geopolitical tensions, has led to some serious indecisiveness.”

For all the positivity among investors surrounding an economic recovery, there have been several key “limiters” keeping stocks from surging once more. Over the last few days, North Korea destroyed a South Korean building at an important border town. Chinese and Indian soldiers got into a skirmish, resulting in casualties on both sides.

Don’t forget about Hong Kong, either, which could easily become a flashpoint in a U.S.-China cold war.

As usual, the market’s trying to make sense of current events and how they will impact share prices in the near future. Instead of gaining clarity, though, investors have only become more confused.

And if sentiment doesn’t shift bullish soon, the rally’s recent gains could quickly be lost as the market fails to surpass an important technical indicator. 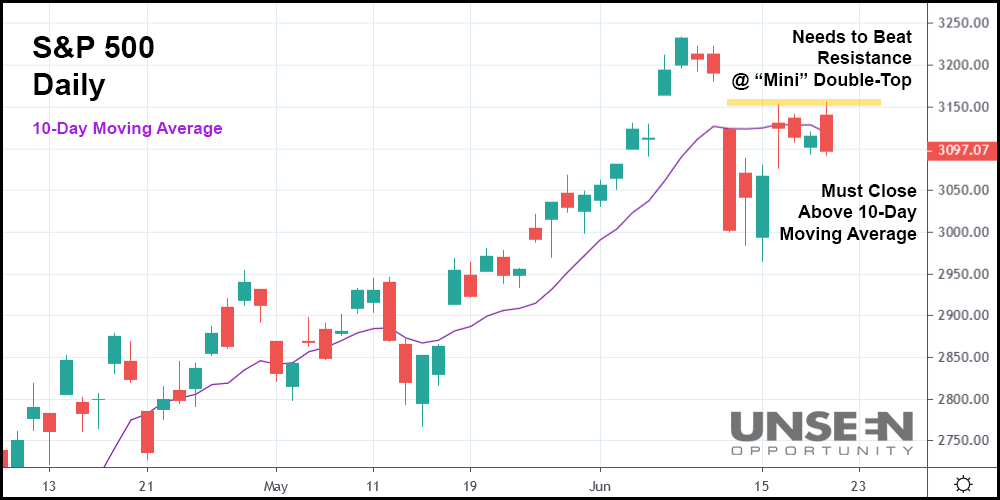 The S&P 500, since plunging last week, has been unable to close above the 10-day moving average – a common indicator used to identify trends.

The index has gotten close to doing so several times, but never managed to quite make it. This morning, the S&P 500 opened above the 10-day moving average before sinking shortly after noon.

If the market (represented by the index) is going to beat the bears back, it needs to make two bullish moves:

In the chart above, clear resistance (represented by the yellow line) has formed with a “mini” double top. Double tops, historically, have been indicators of trend reversals.

And unless the S&P 500 can blow past that double top, small as it may be, the index won’t be able to stay at its current level much longer. Nor will the general market.

For bulls, it could be a sign to get out. For bears, a sign to go short.

Regardless of which side of the fence investors fall on, one thing is clear:

The rally is out of steam. If the market’s going to punch higher, it will have to find another source of good news to do so.

And with Covid-19 cases on the rise, those kinds of headlines will soon be in short supply, right alongside buyers once the “real” selling begins.