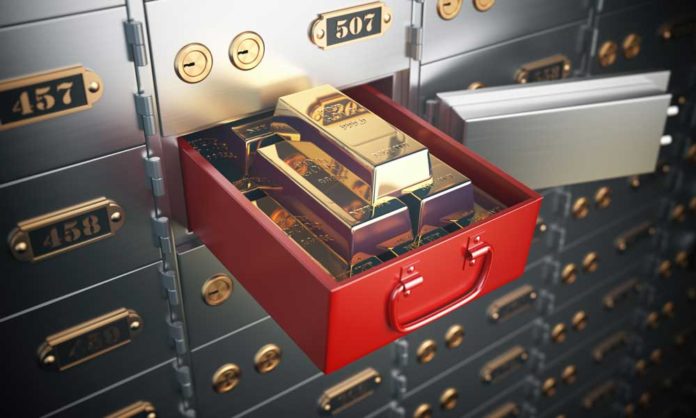 Does gold collapse in the face of deflation?

It’s a real concern among precious metals investors, and somewhat of a universally held belief. Back in 2015, scores of analysts saw gold falling to $400 per ounce when inflation plummeted to 0.5%.

However, shortly after inflation fell, gold dropped only 11% that year to roughly $1,050 per ounce, not anywhere near the analyst consensus. It seemed that the experts put way too much stock into the idea that approaching deflation would cause gold to not only drop, but crash.

These days, gold is facing a similar problem. Inflation is more immediately concerning, but with the Fed set to tighten, some believe deflation is of bigger concern.

Based on gold price and inflation rate charts, it can be difficult to draw hard conclusions on inflation’s modern effect on gold. Instead, historical data tables and statistics (particularly the yearly percent change in gold prices) can help give a better view of gold and deflation’s (or the threat of deflation) relationship over the last few years, which relies upon the following belief among investors:

And though that may appear partially true when taken at face value, it’s important to understand the one factor that truly influences gold prices:

When it comes to gold, there are two different types of fear to worry about:

Whichever is of more concern at any given moment causes gold to move in one direction. And those fears affect gold differently when we’re approaching either deflation or dangerously high inflation.

If deflationary fear is STRONG, but economic fear is WEAK, then gold is likely to DROP because of confidence in the U.S. economy to carry the dollar.

If deflationary fear is WEAK, but economic fear is STRONG, then gold is likely to RISE. It doesn’t matter if interest rates are in check if the economy is almost in recession, because if a recession does arrive, interest rates will be altered mightily by the Fed, potentially crushing the dollar.

If deflationary fear is STRONG, and economic fear is STRONG, then gold is likely to RISE GREATLY – see post-financial crisis gold movement in 2009, where it rose over 27% for the year. Deflation plus a poor economy could result in a “Japan scenario,” where growth has been stifled for decades. This is bad because, in Japan, people and businesses fear taking on long-term debts, as they become more expensive over time with deflation.

If inflationary fear is STRONG, but economic fear is WEAK, then gold is likely to RISE because of a weakening dollar, regardless of economic strength.

If inflationary fear is WEAK, but economic fear is STRONG, then gold is likely to RISE because of a weakening economy, regardless of a strong dollar. If the economy slows to a crawl, a dollar collapse could follow.

If inflationary fear is STRONG, and economic fear is STRONG, then gold is likely to RISE THE MOST, like it did in 1979 – a year in which GDP growth measured a horrendous -0.4% and inflation was sky-high.

However, that does not mean gold will keep rising long-term:

After gold spikes in the scenarios described above, it almost always falls once inflation (or deflation) begins retracing or the economy improves.

If either of those two things happen (often both at the same time), a gold crunch could be coming soon after. It happened in 1981, 1988, and 2013 – all years where inflation and the economy returned to good standing following a period of economic or inflationary uncertainty and rising gold prices.

At present, both inflationary and deflationary fears are riding high. Economic fear, meanwhile, isn’t as much. It certainly should be given that demand is expected to wane by year’s end.

But for now, investors seem to think the US economy is in a good spot. That puts gold in an awkward position for the short term.

Once economic confidence recedes, however, that should all change in a hurry as short-term inflation fears and longer-term deflation fears begin to peak.

So, even though gold has yet to impress this year, that doesn’t mean it’s not going to enjoy a strong rally at some point. It almost undoubtedly will.

And with gold trading at a deep discount relative to where it was in late 2020, this may be one of the market’s best buying opportunities available.