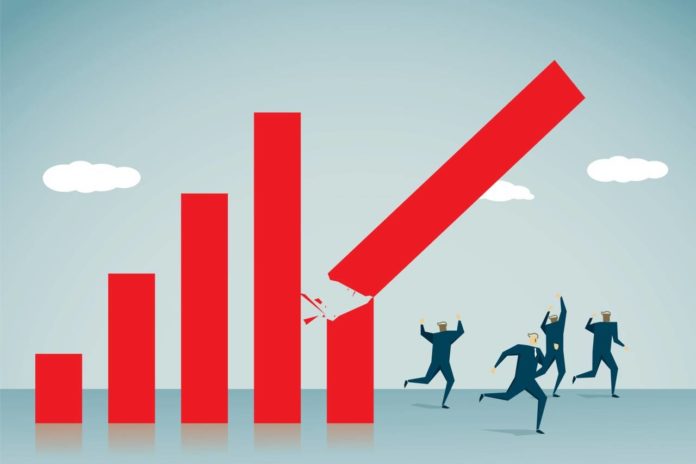 In June’s second trading session, stocks are stalling. The Dow was up this morning while the S&P traded flat. The Nasdaq Composite, meanwhile, lingered in the red.

Today, however, the tide may be shifting.

We’ve said for weeks now that the market appeared overbought. A flood of liquidity from the Federal Reserve has kept share prices afloat for months.

And Fed Chairman Jerome Powell intends to keep it that way while the U.S. economy attempts to reopen and recover.

To some analysts, it’s a shocking display of strength during a time of significant uncertainty.

“The market resiliency has been breathtaking. Whenever you see the market providing a discount, the market continues to find buyers,” observed Jeff Kilburg, CEO of KKM Financial.

Over the last few weeks, the temporary dips have been retraced almost immediately by bulls. More recently, underperforming stocks caught up to high-flying growth corporations.

“This is a healthy reversion as you’re seeing some of the laggards come back in line,” said Kilburg.

“If anything, this is going to help sustain a more bullish stance in the marketplace.”

President Donald Trump helped matters slightly when he pledged the U.S. military’s support to certain areas should riots spiral out of control, beyond the capabilities of the police and national guard.

“I am mobilizing all federal and local resources, civilian and military, to protect the rights of law-abiding Americans,” Trump said in a statement Monday evening.

“If a city or state refuses to take the actions necessary to defend the life and property of their residents, then I will deploy the United States military and quickly solve the problem for them.”

As usual, headlines – not earnings – are driving the market. That trend should continue until more economic data is released.

And if the recent GDP outlook from the Atlanta Federal Reserve proves to be accurate, sentiment could shift in a hurry.

The Fed’s GDPNow, a running estimate of real GDP growth based on available data for the current measured quarter, predicts a 52.8% decline in quarterly GDP for Q2. That means the total economic activity for the quarter, if the estimates are accurate, will have been cut in half.

Ed Yardeni, head of Yardeni Research, sees it as a grievous wound to the economy that he believes will take ample time to heal.

“It could be a swoosh with low single-digit growth rates. We don’t expect that real GDP will recover back to its Q4-2019 record high until late 2022,” Yardeni wrote in a note this morning.

The running theory among many analysts is that the economy will return to form in a “V-shaped” recovery. On the other end of the spectrum is a “U-shaped” recovery, which occurs much slower. Yardeni’s “swoosh,” by comparison, is somewhere between the two.

“So the initial V-shaped rebound could eventually turn out to be a swoosh,” Yardeni wrote.

“This outlook allows for the possibility of a second wave of COVID-19 infections, though not as bad as the first wave and without another round of lockdowns.”

Yardeni’s model suggests that it will take a little over two years for U.S. GDP growth to get back on track.

The major indexes, surprisingly, are not too far off their all-time highs.

That doesn’t make much sense, does it? Even with a “V-shaped” recovery, the economy will still need at least a year before its up and running once again.

And for bulls who continue to buy, that could be a recipe for disaster, especially as nationwide protests increase the likelihood of a second wave outbreak – one that foils America’s reopening plans.