The S&P and Dow sunk 0.5% and 1%, respectively, while the tech-heavy Nasdaq Composite climbed even higher, reaching 10,000 for the first time ever.

And though Big Tech had another big day, the cracks are starting to form almost everywhere else.

At long last, after months of gains, the Covid-19 rally may finally be losing steam.

The Fed revealed its economic roadmap this afternoon, stating that it does not plan on raising interest rates through 2022.

The central bank “expects to maintain this target range until it is confident that the economy has weathered recent events and is on track to achieve its maximum employment and price stability goals.” In addition, the Fed said that it will buy $80 billion per month in Treasuries and $40 billion per month in mortgage-backed securities.

For bulls, that’s all good news. More liquidity and a dovish Fed should help – not hinder – recovery efforts.

Then, the Fed explained its economic projections.

Unemployment, meanwhile, is predicted to hover around 9.3% by the end of 2020 before dropping to 6.5% in 2021. Headline inflation – the measure of the total inflation within an economy, including commodities (food, energy, etc.) – will hit 0.8% by the end of the year according to the Fed’s model. By 2023, the Fed thinks it will clock-in at 2%.

Analysts were quick to point out that the numbers, while mostly disappointing, could also be completely wrong amid such a unique recession.

“Analyzing the Fed’s economic projections at this time when much of the economy is still opening is riddled with uncertainties. This is an economic recession with no precedent,” Danielle DiMartino Booth, CEO of Quill Intelligence, said.

“The Fed is going to continue to provide support for the economy. They view the U.S. economy as a victim of a pandemic,” Faranello said.

“Not everyone will agree with what the Fed is doing, [but] even as a market participant, it’s hard to see the economic devastation that we’ve seen.”

With the Fed ready to keep rates low, “gold bugs” are preparing for a payday. Once investors figure out that precious metals – and gold in particular – could rise further, a new gold rush could be upon us in a hurry. 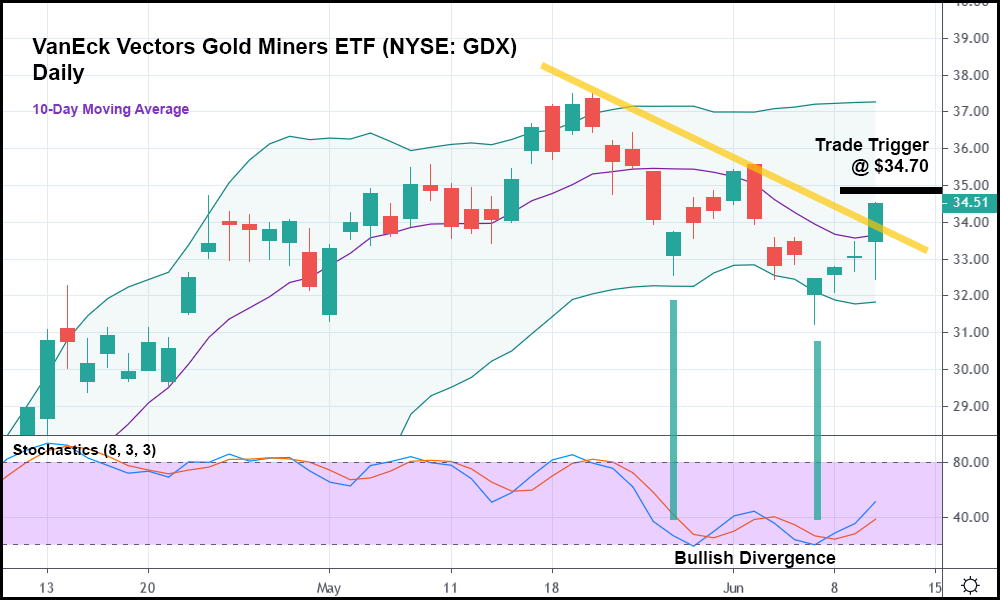 And what better way to capture that surge than by going long on the VanEck Vectors Gold Miners ETF (NYSE: GDX). After peaking in late May, GDX has steadily fallen, giving us a “fake out” setup back in early June.

Now, though, with the Fed’s near-zero rate announcement in the rearview mirror, another setup has formed – one that could put GDX well past its May high.

This ETF also just displayed signs of bullish divergence. GDX made a lower low in its price, but a higher low in the stochastics indicator, suggesting a bullish move is in the works.

Add to that the fact that GDX leaped above both the 10-day moving average and its minor bearish trend today, and you’ve got plenty of evidence for an uptrend continuation.

Should GDX trade above today’s high, it might make sense to go long on the stock with a trade trigger of $34.70.

Long-term, the U.S. economy will get back on its feet. For now, though, the market’s confidence seems shaken. And the losses “buy, hold, and hope” investors endure will likely manifest as gains for short-term precious metals traders.

Regardless of how high gold has already risen.