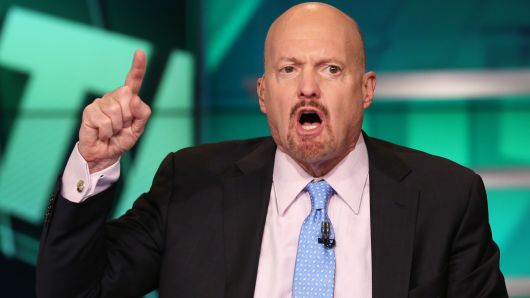 Yesterday, we discussed how today’s market looks eerily similar to how it did right before the 2008 Financial Crisis. Last night, CNBC’s Jim Cramer “one-upped” us with a comparison of his own.

The Mad Money host said on his program last night that investors need to be careful, as equities resemble another recent crash.

Instead, Cramer thinks stocks are closer to where they were in 1999, when the dot-com bubble was inflating the market to dangerous levels. These days, he’s concerned that too many stocks are trading on “nontraditional valuation metrics”, like the tech startups of the dot-com era – most of which saw their share values skyrocket before even releasing their first earnings reports.

“You have to be skeptical of markets, entire markets, where more and more stocks are valued on something other than earnings. This is what happened during the dot-com crash — you had tons of companies that were trading on eyeballs and page clicks,” he said.

“The more stocks that trade on weird metrics, the more likely it is that the market’s overvalued.”

Those “weird metrics” eventually caused the tech-laden Nasdaq to collapse in 2000, when it lost nearly 80% of its value within seven months.

Take Webvan, for example, one of the most famous dot-com failures. The online grocer raised close to $800 million from venture capitalist funds and an additional $375 million during its IPO, in which the company sold 25 million shares at $15 each.

Webvan, flooded with capital, needed to do something with it in order to impress investors. So, the California-based company announced plans to expand into 26 major cities – a move that ended up costing Webvan dearly.

“[The company] committed the cardinal sin of retail, which is to expand to expand into a new territory […] before we had demonstrated success in the first market,” said Mike Moritz, a partner at Sequoia Capital who also served on the Webvan board.

“In fact, we were busy demonstrating failure in the Bay Area market while we expanded into other regions.”

But that didn’t stop investors from snapping up shares en masse. After Webvan went public, share prices topped out at $25.44 on December 3rd, 1999.

Then, just one month later, they cratered, and over the next quarter, Webvan struggled to raise the capital it needed to survive. By July 6th, 2000, Webvan shares were trading at just 6 cents apiece.

To Cramer, several blue-chip tech stocks – like Netflix (NASDAQ: NFLX), Facebook (NASDAQ: FB), and Alphabet (NASDAQ: GOOG) – are showing similar symptoms, albeit not as severe. “Disparate metrics” are being used by investors to determine their values, he thinks, not earnings.

“There wasn’t anything that made people say like, ‘You know what, wow […] see all those awards? I’m missing out on too much content. I got to sign up.’ And that’s why the stock got hit today,” he said.

“I have another dozen examples in my head. A dozen examples of stocks that simply don’t trade on earnings or sales anymore,” Cramer said, citing Johnson & Johnson, McKesson, and Boeing.

“When there were only a few of these names, it was fine. But these days there are so many of them that it’s become much harder to parse what’s going on in the broader market.”

“You can only go up for so long based on something other than earnings before we have to accept that valuations have gotten out of whack. In other words, this is not a normal market, so we do need to be careful.”

But it’s not just that stocks are overvalued, either. Facebook and Google, for example, may actually be undervalued as a result of some knee-jerk selling in reaction to federal and state investigations.

What that means for stocks going forward has yet to be seen, but it’s likely to result in more of what’s run the market ragged over the last few months:

And if Trump can’t get a handle on the planned October trade war meeting in Washington, then investors might want to buckle up.

Because the rest of 2019 could be a very bumpy ride.