Stocks are trading flat today as the bull market stalls yet again. The Dow and S&P remain relatively unchanged as of noon, as does the Nasdaq Composite.

But it’s not what traders necessarily expected after Bank of America released its February Global Fund Manager Survey this morning. In the report, B of A revealed that professional investors are almost unilaterally optimistic about the market’s future.

In other words, things are simply going too well. Citi made a similar observation last week with its proprietary “Panic/Euphoria Model,” which measured a spike in positivity that nearly went off the chart. 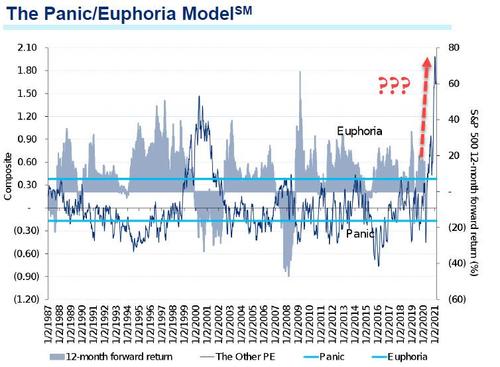 Investor euphoria’s even surpassed the height of the dot com bubble, which has repeatedly been pointed to as an example of excessive bullishness.

But that’s where equities are, now, according to data being collected by Wall Street’s top firms. And it’s not just “dumb money” retail investors who are feeling this way.

The majority of fund managers believe the bull market isn’t over. Some even say it has much further to go. 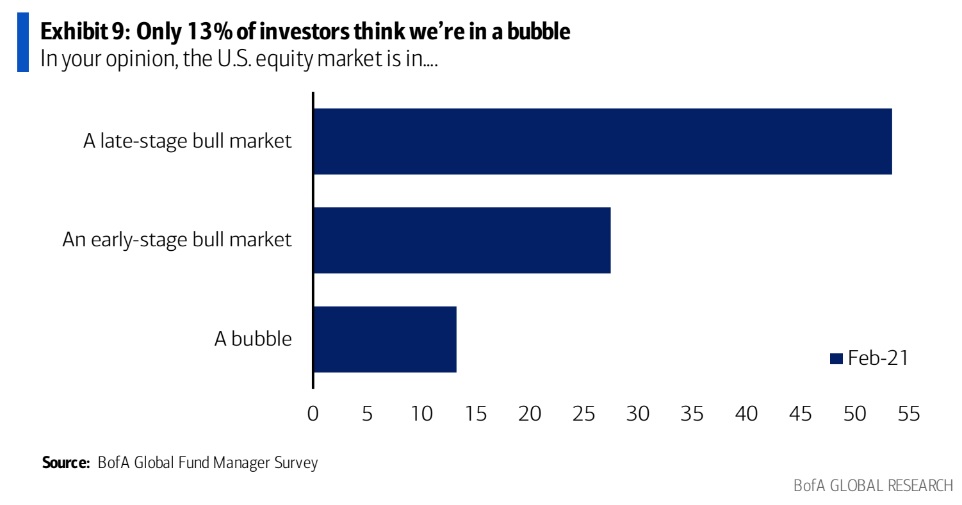 In addition, survey respondents said that emerging markets, oil, the S&P 500, and Bitcoin should continue to overachieve this year.

Last month, fund managers felt that emerging markets and Bitcoin were some of the most overcrowded trades. As of this month’s survey, they also see them as winning plays.

And each asset class selected certainly makes sense from a macroeconomic standpoint. Aggressive fiscal policy coupled with extreme liquidity should “raise all ships,” or in this case, assets. Emerging markets, in particular, should see a major lift if the dollar continues to weaken as foreign debt becomes cheaper.

Investors who need a rough guide on what to buy and hold through the rest of the year might want to look more closely at these assets. Especially the tried-and-true S&P 500.

Part of the reason why is that the “smart money” has overextended itself in terms of risk. 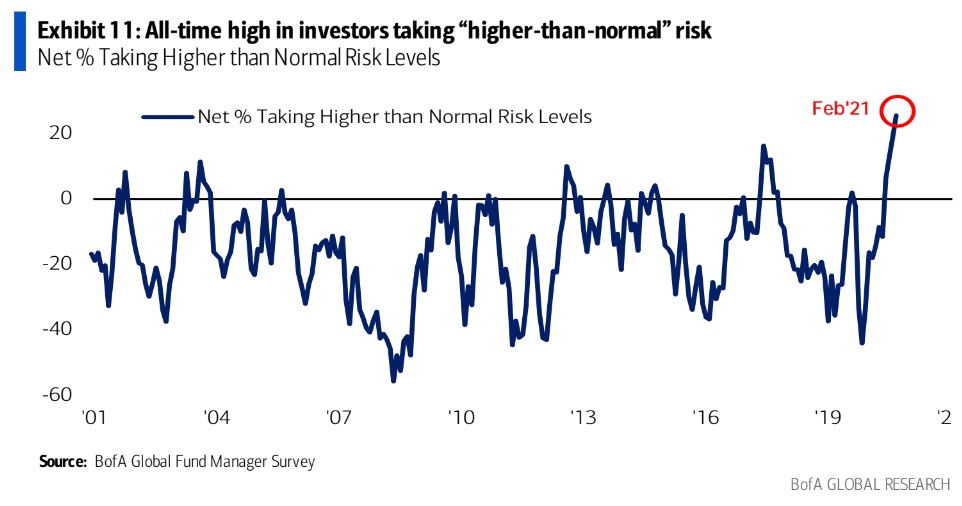 There has been plenty of talk about short-positioned hedge funds over the last few weeks, but the majority of fund managers are long in a big way. That’s caused a dip in the VIX – the market’s “fear gauge” – as well.

The VIX broke below 20 last Wednesday for the first time since late November. Before that, the VIX remained above 20 for the entire pandemic.

All trends come to an end, however, and the current bullishness will eventually have to peak. When it does, the investors taking “higher-than-normal” risk will rapidly cycle out of equities to avoid significant losses.

The other dominoes (hedge funds) are likely to fall in quick succession as bulls realize that the jig is up. No one knows exactly when that’s going to happen, nor what the specific cause of the impending correction will be.

Investors are remaining bullish as a result. That could all change in a hurry, though. And once it does, tremendous “dip buying” should follow.

Because, as usual, the U.S. government and Federal Reserve will swoop-in to save the day.