Bullish sentiment continued today in another highly positive trading session. The indexes soared right alongside hopes for a vaccine and smooth economic recovery.

The Dow, S&P, and Nasdaq Composite all crept closer toward their pre-COVID-19 highs as a result.

And though the surge has little economic data to back it up, one thing’s for certain:

Investors don’t want to miss out on the next “leg up,” even if a vaccine and true economic recovery aren’t coming any time soon.

“A lot of this has evolved into a reopening story that’s been able to piggyback off some positive news from a therapeutics standpoint,” Keith Buchanan, portfolio manager at GLOBALT said.

“[But] there are definitely questions about whether we are pricing in a return to a normal that, scientists are warning, could have a resurgence in the virus.”

If a second wave hits, the economic reopening (and, as a result, the ongoing rally) might get shut down quickly – something former Food and Drug Administration Commissioner Dr. Scott Gottlieb warned investors about this morning.

“We now see a trend in an uptick in hospitalizations. It’s a small uptick, but it is an uptick and it’s unmistakable and it is probably a result of reopening,” Gottlieb said.

“I’m concerned there are people who think this is the all-clear, and I think what we really need to be doing is defining a new normal. We’re going to need to live differently until we get a vaccine.”

Without a solid medical solution, it’s hard to say whether or not the market’s recent gains will “stick.” The economy has a long way to go before it reaches its pre-pandemic numbers.

Next month’s Bank “stress test” – an analytical test used to determine if the banks have enough capital to withstand another economic hardship – will likely help matters if America’s top banks “pass.” Similarly, rising oil prices should provide even further stability.

And if oil’s going up, then energy stocks might be a good buy moving forward. Not only are they less tied to the volatile market, but some of them still look oversold. 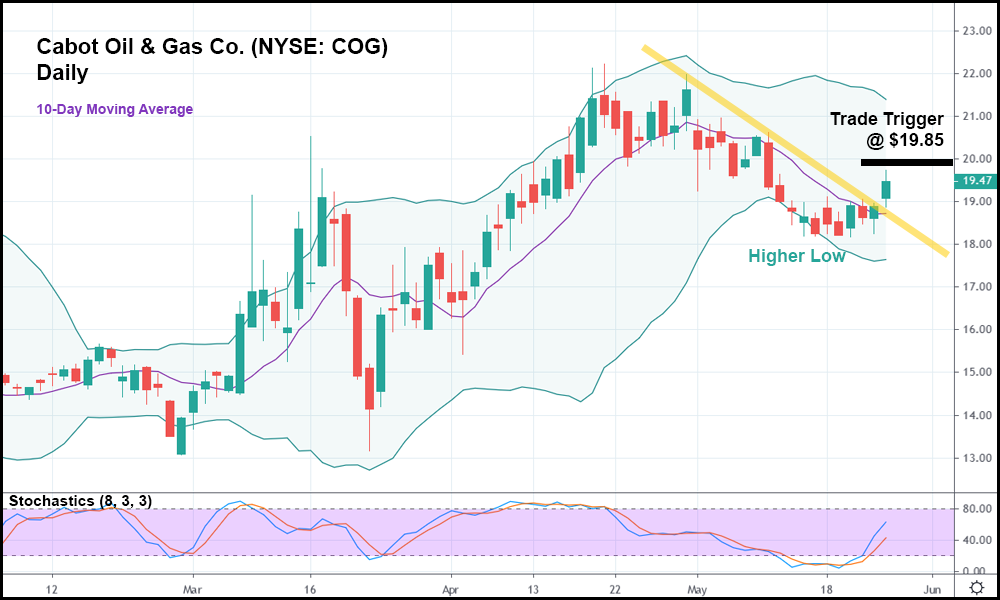 COG peaked in mid-April, and since then, has been stuck in a downtrend that’s frustrated shareholders. The stock plunged below the 10-day simple moving average (10-SMA) in late April and has remained below it, until Friday when COG finally closed above the 10-SMA.

Today, COG blew past its minor bearish trend (represented with the yellow trendline) and now sits on top of a higher low.

Should COG trade above today’s high, it might make sense to go long on the stock with a trade trigger of $19.85. From there, COG would likely re-test the highs of mid-April.

And even if COG doesn’t break through to a new 2020 high, it would still net a tidy gain at $22.00 (the April high) while the rest of the market wrestles with COVID-19.