Stocks tumbled this morning as all three major indexes endured significant losses. The Dow and S&P opened lower before falling further around noon. Only the Nasdaq Composite was able to gain some ground back during trading.

It’s a bad sign for bulls who were hopeful about a rally continuation on the back of strong Big Tech earnings. Not even Amazon (NASDAQ: AMZN) was able to right the ship despite blowout quarterly results. The eCommerce giant, which was the last of the “mega-cap” stocks to report, saw sales jump 44% in Q1.

Amazon posted a stunning $15.79 earnings per share (EPS) as a result, far surpassing the $9.54 EPS estimate. Amazon shares traded higher in response but it wasn’t enough to lift the general market.

Today’s plunge also comes as a bit of a surprise following a muted inflation print. The Personal Consumption Expenditures price index for March increased 0.5% month-over-month and 2.3% year-over-year. Core PCE, which excludes food and energy, was up 0.4% for March and 1.8% year-over-year.

But instead, nearly everything’s falling. Even the less market-correlated companies are being run ragged by bears.

And it has something to do with that the Dallas Fed President, Robert Kaplan, said earlier this morning.

“We’re now observing excesses and imbalances in markets,” Kaplan remarked, before adding that he is “very attentive to that and that’s why I do think at the earliest opportunity, I think will be appropriate for us to start talking about adjusting those purchases.

Reopening old wounds, Kaplan finished by saying that “we’ve got real excesses in the housing market.”

His hawkish remarks sent bulls spinning. The tapering of bond purchases by the Fed would almost certainly cause a correction, if not a crash. Even the mention of elevated price shocks investors into panic selling. On Wednesday, Powell uttered the “f-word,” admitting that some assets were looking “frothy,” which is ironic considering that he’s the one causing stocks to “bubble.”

Regardless, his comments caused a rapid equity sell-off, creating a dip that was immediately bought back intra-day.

Now, bulls have to contend with Kaplan, who took it several steps further than Powell by saying that tapering should begin at the “earliest opportunity.”

Is May too early to start having that discussion? Probably not. The market is utterly addicted to liquidity. Eventually, stocks will have to break the habit.

So too will American households, which have grown increasingly dependent upon the US government. The latest Personal Income and Spending data revealed that 34% of all household income in the US now comes from the government. 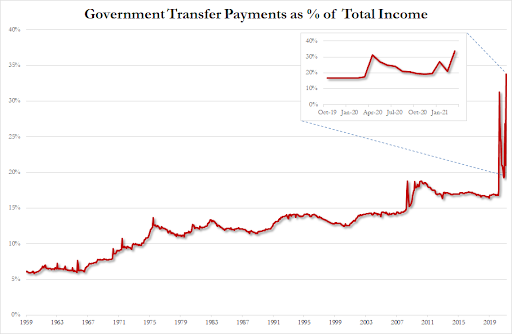 Biden’s $1.9 trillion stimulus package sparked an eruption in personal income as well, which isn’t surprising given the record-setting level of government-provided income.

In short, nearly everything in the US is peaking except for inflation. And based on what’s been happening recently, it should only be a matter of time before an inflationary spike is reflected in future PCE data.

If stocks are going to press on and go higher from here, it may take an act of God to do so. That seems unlikely, though, considering how this year has gone.

So, as we enter May, do so with extreme caution. Bulls are running out of rope, and once they do, anyone who sticks around is going to get stuck “bag holding” until the next major run.

Even if corporate revenues continue to beat analyst estimates.