The FOMC wrapped up its June meeting last Wednesday, and as of this morning, investors still aren’t quite sure what to make of it. Fed Chairman Jerome Powell announced a pair of rate hikes in 2023, moving the Fed’s rate-raising schedule forward one whole year.

Back in March, most Fed officials thought rates wouldn’t go up until 2024 at the earliest by comparison.

Then, on Friday, St. Louis Fed Chairman Jim Bullard suggested the market may even see rate hikes by 2022.

“It’s natural that [the Fed] has tilted a little bit more hawkish,” Bullard said in an interview on CNBC.

He also explained that “Fed Chair Powell has opened the taper discussion this week,” and there “is some upside risk on the inflation forecast.”

The comments, all made pre-market, caused stocks to open for major losses before closing lower on the day.

And most analysts simply pegged it as a knee-jerk reaction to the prospect of higher interest rates.

But beneath the surface, something far more nefarious was brewing. Most importantly, it could be indicative of a much larger bearish trend.

And though the market was able to digest 8 of those rate hikes, bulls simply couldn’t stomach number nine. Stocks plummeted in late 2018 as investors watched the S&P 500 sink 20% from peak to trough. 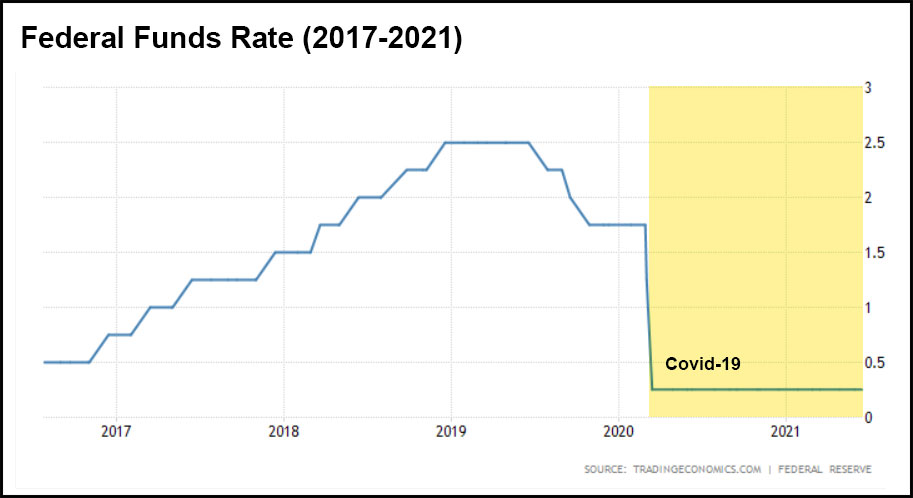 Powell admitted shortly thereafter that the rate hikes may have been overly ambitious. A few days later, he pulled the federal funds rate back below 2%. Then, Covid-19 graciously emerged a few quarters after that, giving the Fed a reason to cut rates to 0.25% once more.

It’s long been said that QE is a “roach motel.” Once an economy “checks in,” it can never “check out.” Economists now point to the late 2018 fiasco as evidence of this. But there’s more to it than a simple case of “rate shock.”

Instead, it has to do with something called the natural (or neutral) rate of interest, which is the interest rate required to maintain economic growth while keeping inflation stable. In other words, it’s the interest rate that leads to neither an economic boom nor a recession. Monetary policy usually revolves around keeping rates close to the natural rate of interest as it provides economies with both low inflation and solid economic growth without the risk of overheating.

The Fed didn’t think so, though, and pressed on anyway. Many economists assumed that the US had finally emerged from the Financial Crisis in a stronger position.

But the economy was still rather weak in reality. And once rates were hiked to 2.50% in late 2018, the market crashed. What some traders missed, however, was what transpired with Treasurys and the dollar. The 10-year Treasury yield slid while the US dollar rocketed higher, signaling that the market thought the federal funds rate would come right back down just days after Powell announced the hike to 2.50%.

And sure enough, that’s exactly what happened. Powell dragged the federal funds rate below 2% and the market eventually recovered while the dollar gained and long-term Treasury yields continued to drop.

Fast-forward to last week, and investors saw what was essentially the same response. Stocks fell on Friday opposite the dollar, which surged. Long-term Treasury yields went lower.

Once again, the market wasn’t so sure the Fed would be able to hold rates higher when it decides to hike. Fed economists are likely overestimating the natural rate of interest just like they did in 2015 as a result. The economy, while certainly showing signs of recovery, is still in a sad state after enduring the Covid-19 pandemic. Stimulus will eventually run out and liquidity will slow. The Fed thinks the economy can overcome these hurdles.

But on Friday, investors called their bluff. And unless something big changes soon in terms of growth or inflation, the US is likely back on a recessionary path – one that will be capped off by another ill-timed rate hike, only for the Fed to eventually capitulate once more.

Next time it happens, though, a period of stagflation could be setting in. All while the Fed tries to “right the ship” with rates already at rock-bottom levels.

So, if the market keeps this trend going, stocks could very well be in for another late 2018-like crash. Except for this time, the Fed might not have any more room to cut rates.