Is it time to sell? As Bank of America’s November Fund Managers Survey suggests, Wall Street couldn’t get more bullish.

With a pair of vaccines on the way, a presumed stimulus package, and even quantitative easing (QE) from the Fed, there’s plenty for investors to be happy about.

But that doesn’t mean it will be smooth sailing the whole way. Instead, some analysts believe the market’s in for a bumpy ride.

“The market now needs to balance the long-term optimism of having a vaccine with the short term problem of a restrained economy,” said the team from Vestact, a South African money management firm.

The margin between a rally continuation and a sudden dip seems razor-thin these days.

At present, the major indexes are trading flat. It’s no surprise given the confusion over the market’s short-term prospects.

But one strategist, Dhaval Joshi, says he’s got a clear-cut “sell signal” investors need to be aware of.

“Since early 2018, a rise in the long bond yield has sent shudders through the stock market on four occasions: February 2018, October 2018, April 2019 and January 2020,” explained Joshi, who serves as BCA Research’s chief European strategist, in a note to clients.

“On all four occasions, the tipping point was the earnings yield premium on tech stocks versus the 10-year U.S. Treasury bond yield dipping toward its lower limit of 2.25%.” 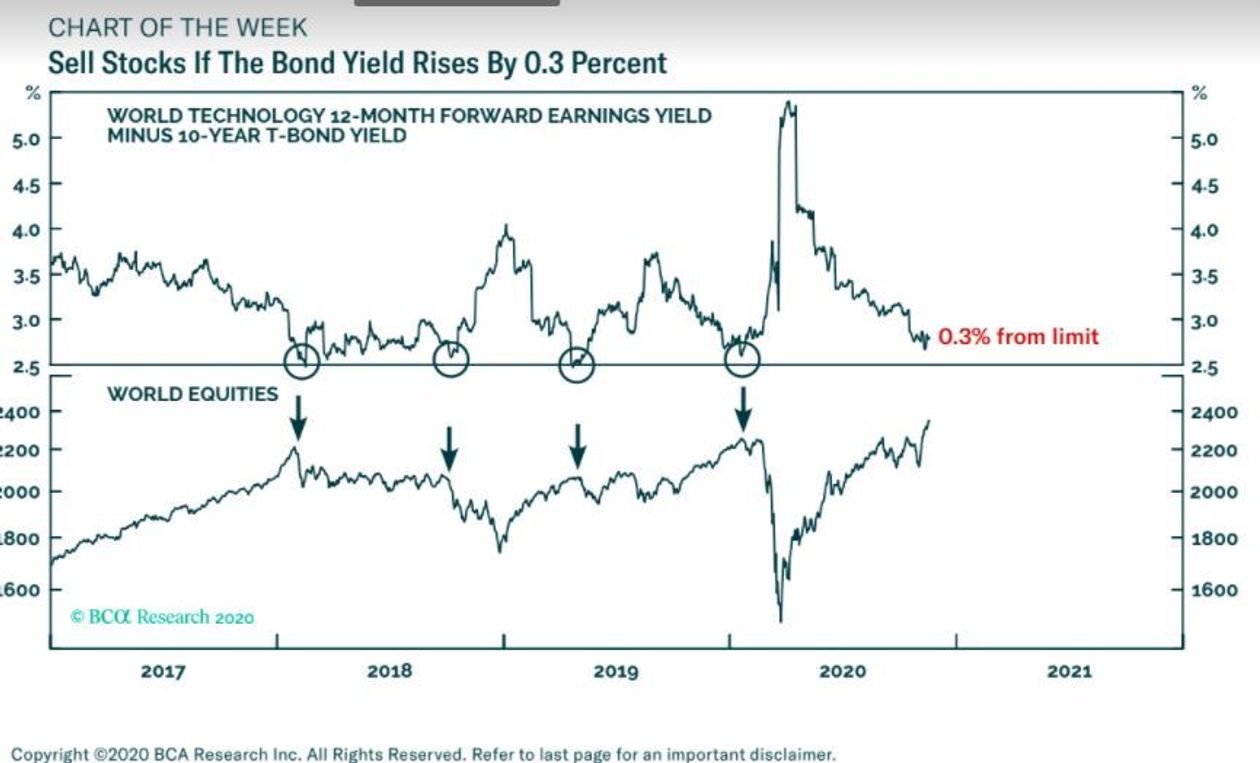 “Crucially, this means that the stock market’s 60% rally since mid-March is reaching a near-term valuation test,” Joshi added, referring to his earnings yield gap target of 2.5% that would warrant some selling.

“How can the aggregate market stand at an all-time high when a terrible plague continues to ravage the global economy? The simple answer: because of record-low bond yields.”

Low interest rates and bond yields have long been credited for the stock market’s success since 2009, where yields have been historically low compared to the late 20th century.

But during periods of growth, bond prices and stocks move in opposite directions as they’re forced to compete for capital. As stocks go up, so too do bond yields.

In other words, if the market goes up much further, the 10-year bond yield should, too.

Theoretically, Joshi’s hypothesis seems solid. The million-dollar question, though, is whether or not it will actually predict a sell-off.

It certainly looks possible, and historical performance suggests that a correction would even be probable if the target earnings yield gap is achieved.

Regardless of what’s going on with the economy, Covid-19, or any new vaccine developments in the meantime.