Stocks opened lower this morning before roaring back by midday. After the minutes from the July FOMC meeting were released Wednesday afternoon, the market sunk in response.

But today, everything seems to be “a-okay” despite confirmation from the minutes that the Fed would taper bond purchases toward the end of this year.

Analysts largely expected a taper in Q4 and an official taper warning at the conclusion of the Fed’s September meeting. This timeline was agreed upon by Wall Street prior to the release of the July meeting minutes.

That means the market didn’t really learn anything new on Wednesday afternoon.

So then why did equities crater into Wednesday’s close?

It all has to do with derivatives. And, more specifically, gamma – an options Greek that estimates the change in an option’s directional risk as the underlying stock’s price changes.

In other words, gamma estimates the change of an option’s delta (which estimates an option’s expected price change relative to $1 movements in the underlying stock). In addition, market positions can either be long or short gamma.

The concept of gamma may seem unimportant to how the stock market operates, but these days, derivatives are primarily driving the underlying. In July, single-stock options trading activity averaged $500 billion per day. That’s the highest measured and by a wide margin.

And the more long gamma options positions there are, the more the stock market wants to move. Over the last several months these have primarily been bullish positions. That also explains why the option expiration date of each month (the third Friday of a given month) has typically resulted in fireworks.

Bullish long gamma positions start to roll off the books and give way to short gamma investors near expiration as bulls take profits. The S&P ends up hitting gamma “air pockets” in the process, leading to rapid dips that last only a few trading sessions. Then, a few days later, traders get long gamma by loading up on long calls with stocks trading at a discount, ripping the market higher. 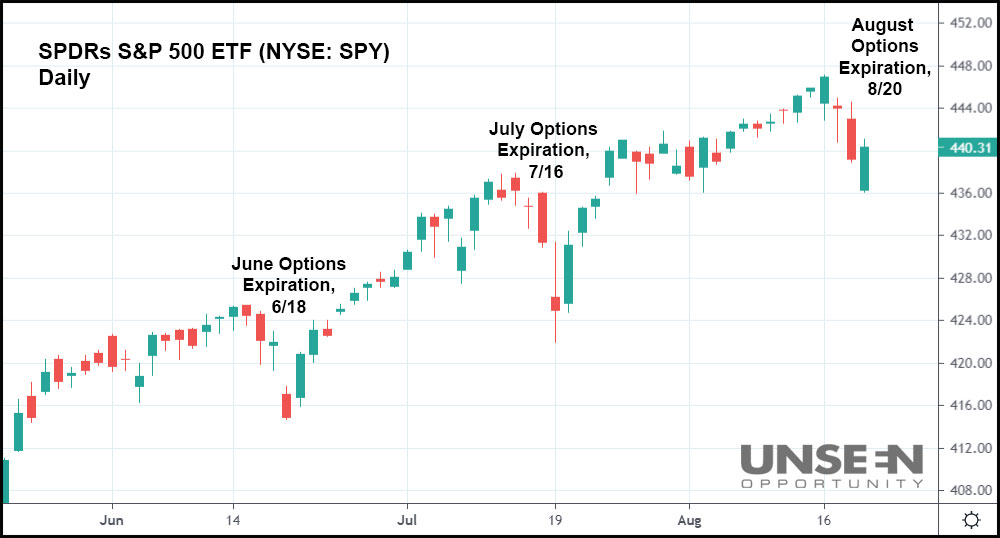 Bearish positions (both long and short gamma) are often forced to cover, too, when the market doesn’t drop enough for those bearish positions to become profitable. This buying accelerates the recovery rally that follows.

With the August options expiration date looming (8/20) it could be argued that the Fed minutes didn’t cause any direct selling, but that they encouraged long gamma bulls to bail on their positions ahead of expiration. This kind of thing also happened in June, July, and for most of the other monthly expiration dates in 2021.

So, the headline here is to not only be wary of tomorrow’s trading activity but to watch future options expiration dates as well. Exiting long positions on the third Monday in a given month only to buy back in the following Monday (the fourth Monday, after the monthly options expire) has been a fantastic strategy over the last eight months.

And, with even more uncertainty facing stocks in September, it may very well sidestep the next options expiration-driven dip.

Right before another major buying opportunity presents itself just one week later, prior to a potential rally to new highs.