Inflation was up and so were stocks this morning as investors attempted to kickstart a rally continuation. The November Consumer Price Index (CPI) was released before the market opened today, revealing a 6.8% rise in inflation year-over-year (YoY). The Labor Department’s data showed that inflation accelerated last month at its fastest pace since 1982.

In terms of the bigger picture, it should’ve been seen as a bad CPI print by investors. But bulls took it as a sign to start buying again as evidenced by an S&P futures surge immediately following the CPI release. The YoY gain of 6.8% just barely beat the Dow Jones estimate of +6.7%, which some analysts took as a “win.”

“[November’s CPI] number might show the most inflation in decades, but it still came in right about as expected. This is actually a good thing, as the market has priced in higher inflation, so this could be viewed as a relief,” said LPL Financial chief strategist Ryan Detrick.

With the next FOMC meeting coming up in 5 days, however, inflation hitting a 39-year high probably isn’t good news. Fed Chairman Jerome Powell is expected to announce a faster taper following the two-day meeting.

Some Wall Street banks believe Powell will actually double the reduction in monthly asset purchases. And that may very well happen following today’s data. But what could also 2x the taper is one of the Fed’s other closely-watched indicators:

For over a year, Powell has claimed that monetary policy would remain dovish until “full employment” was reached in the US. Many analysts thought that meant the US had to hit pre-pandemic unemployment, which hovered around 3.5%.

But according to Bank of America CEO Brian Moynihan, the US may not see 3.5% unemployment ever again. In reality, Moynihan argues that the current unemployment rate – 4.2% – is probably as good as it gets.

When asked about employment in a Bloomberg TV interview, Moynihan explained that not only had full employment been reached, but also that the Fed would be unable to push unemployment any lower via shifts in monetary policy.

The B of A CEO cited high job turnover and a stagnant labor force as evidence of a plateau in employment. The bank’s chief economist, Ethan Harris, wrote in a note this morning that he learned “virtually every part of the country and every industry is experiencing labor shortages” after speaking with business leaders. This is reflected in the job openings rate as well, which rose to 6.9% last month, almost matching October’s record high. 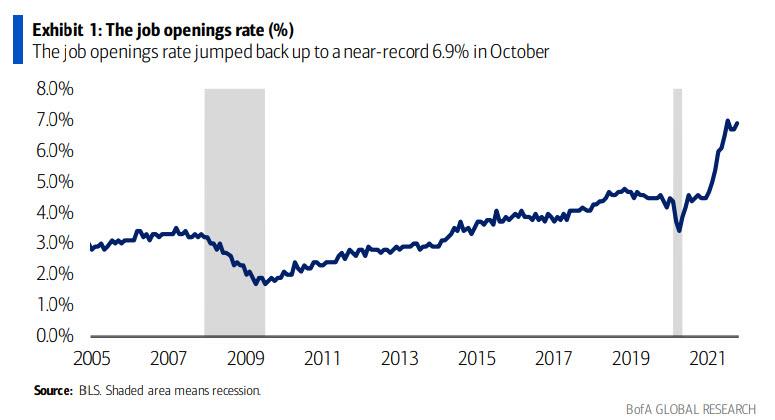 Perhaps the most interesting stat revealed by Harris concerned household wealth in the US.

“Since the beginning of the crisis households have accumulated [$31 trillion] in net worth, including almost [$4 trillion] in liquid deposits, allowing them to avoid working,” Harris wrote.

Does that sound like the sort of thing that warrants more dovish policy decisions from the Fed? Despite his track record, Powell’s not enough of a fool to ease off the taper in the presence of sky-high inflation, a fully-employed economy, and a glut of household savings so large, that it’s keeping workers at home.

If anything, these factors should give Powell plenty of ammunition to accelerate the taper like Wall Street thinks he will on the 15th while moving next year’s rate hike forward to even earlier than initially expected.