The U.S. government just placed an order for a coronavirus vaccine.

Pfizer (NYSE: PFE) and BioNTech (NASDAQ: BNTX) – whose latest drug showed promise in recent studies – will produce 100 million doses of their vaccine provided that it continues to impress in future trials. Valued at $1.95 billion, the deal leaves the door open for an additional 500 million doses.

PFE jumped 2% higher in response while BNTX soared over 8%. The major indexes enjoyed some modest morning gains as well.

“Typically, it takes roughly a decade for a new vaccine to go through the various stages of development and testing,” explained Ed Yardeni, CIO of Yardeni Research.

“However, the urgency of the pandemic […] has resulted in a mobilization of global medical resources rarely seen before in human history. Billions of dollars, provided by both the public and the private sectors, are funding the global campaign to develop tests, vaccines, and cures for the virus.”

Yardeni’s making the same observation as everyone else. The market knew a coronavirus vaccine would be deployed in unprecedented fashion, and more quickly than any vaccine in the past.

Now, however, investors have confirmation that a plan is in place pending additional testing.

“The next phase will be critical to demonstrate that the potential vaccines can protect against infections,” Yardeni said.

Of more immediate concern are two earnings reports coming down the pipe this afternoon. Microsoft (NASDAQ: MSFT) and Tesla (NASDAQ: TSLA) will report earnings after trading closes today, and the pair of reports could be critical in how analysts view the extended rally.

The reports could also reveal whether or not Big Tech is overbought. Netflix (NASDAQ: NFLX) reported earnings last Friday, and despite having a solid second quarter, the company couldn’t justify its sky-high valuation due to an EPS miss.

And according to some recent insider activity, it looks like the “smart money” expects a market-wide crunch, possibly stemming from poor Q2 numbers. 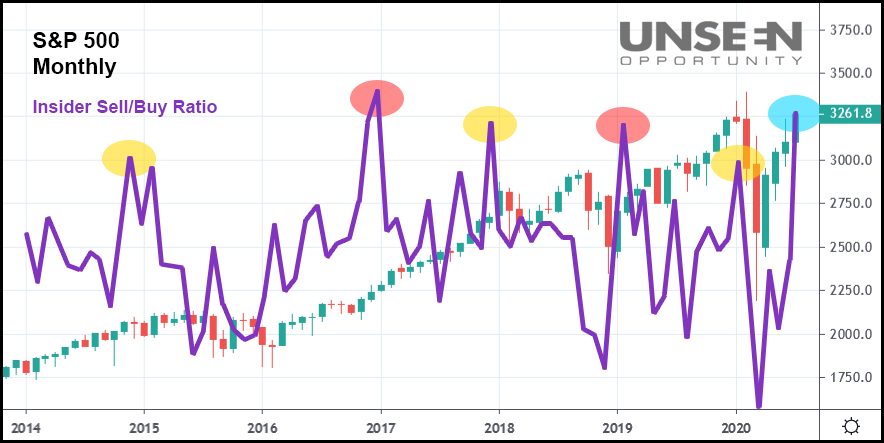 In the chart above, we’ve plotted the insider sell/buy ratio – a ratio measuring the number sell order filings vs. the number of buy order filings by insiders – against the S&P 500 in terms of monthly candlesticks.

As of this month, that ratio has climbed to a historically high level, surpassing where it was right before the Covid-19 crash.

However, that doesn’t mean insiders are always right. The red circles indicate the times they jumped the gun and ended up selling too early. That happened in late 2016/early 2017 and again in early 2019. To be fair, though, shortly after the sell/buy ratio peaked in 2019, the market did sell-off for one month. Then, the ratio cratered as insiders started buying before stocks continued their uptrend.

So, while the current peak in the sell/buy ratio (blue circle) isn’t a guarantee that equities will drop, it is a sign that insiders are getting very nervous. With the major indexes stuck at or below key levels of resistance, scores of technical traders likely feel the same way.

If Big Tech earnings are a flop, you can add fundamental analysts to that list as well.

Single-handedly fighting the bearish tide is the Pfizer vaccine candidate. Will it be able to push the market higher for a few more weeks?

Probably not. The U.S. government just pre-ordered 100 million doses of the vaccine and stocks barely responded.

The “smart money” fears a sell-off. And based on past sell/buy ratio trends, it seems more likely than not that a particularly nasty one could be on its way.