Stocks are up this morning following a Tuesday afternoon announcement from Moderna (NASDAQ: MRNA). The biotech firm says that its vaccine candidate showed a “robust” immune system response in a recently completed study. The New England Journal of Medicine, which reported the data, stated that all 45 patients in the human trial were found to have neutralizing antibodies.

In response, MRNA shares soared after-hours, as the announcement was made after trading closed. The stock is up roughly 6% as of noon, today. Reopening sensitive stocks – American Airlines (NASDAQ: AAL), Royal Caribbean Cruises (NYSE: RCL), and others – are surging, too.

To Fundstrat founder Tom Lee, it could be a make or break moment for equities.

“A COVID-19 cure/vaccine is a binary event for markets, and there are many ‘shots on goal’ on the healthcare side and only one needs to be successful,” Lee explained in a note.

“There are piles of cash seen in hedge funds, macro funds, mutual funds and individual investors. If the cadence of healthcare data continues to support some sort of cure, the focus on ‘re-closings’ ultimately fades.”

Lee famously said that Bitcoin would hit $20,000 in 2017, which happened later that year. He’s been wrong about almost every other prediction since.

And based on the current market situation, it seems as though he’ll also be wrong about his vaccine prediction.

The S&P 500 has been unable to surpass its early June highs. The Dow’s stuck below them as well, even after a handful of Covid-19 treatment and vaccine revelations.

Worse yet, plenty of bearish “triggers” linger, waiting to finally swing the extended rally into a correction. Big Tech’s struggles this morning pared-down much of the market’s vaccine-driven gains.

FAANG stocks and Microsoft (NASDAQ: MSFT) must keep rising if the indexes are to make another leg up. These six companies control a massive portion of the market.

They’ll likely be called upon to do the heavy bullish lifting.

And flying under the radar is the ongoing crude oil situation, which grows more dangerous by the day. The U.S. Oil Fund (NYSE: USO), which many traders rely on to gauge the price of crude oil, has worked itself into a parabolic triangle – a candlestick formation that could lead to either a major rally or massive collapse. 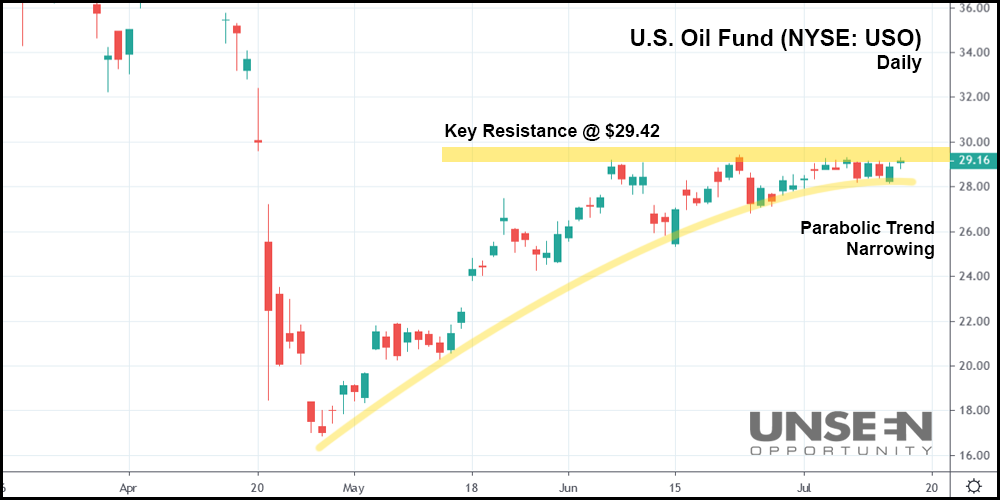 In the daily candlestick chart above, you can see that USO is now in a very tight trading range. Despite its best efforts, the oil futures-tracking fund has simply been unable to break out past key resistance at $29.42. More importantly, its (inversely) parabolic uptrend has plateaued, indicating that a similarly shaped decline could be waiting in the weeks ahead.

If USO can’t surpass resistance, it runs the risk of falling below its bullish trend that started in late April. The last time crude oil futures crashed, the market got shellacked in an ample dose of panic-selling – something that could certainly happen again provided that oil ends up tanking.

Ironically, that would mean crude oil – not the coronavirus – killed the post-crash rally, even though Covid-19 (and the subsequent lockdowns) got investors into this mess in the first place.