Bulls are celebrating this morning after the S&P hit 4,000 for the first time ever. Tech’s roaring again, pulling the general market higher while Dow components lag behind for far more modest gains.

An infrastructure package is en route, too, and U.S. manufacturing activity just hit a 37-year high. The Institute for Supply Management (ISM) reported March’s national factory activity reading, which jumped to 64.7. It’s up from 60.8 in February to a level that hasn’t been seen since December 1983.

Anything above 50 indicates a manufacturing expansion. Economists only predicted a rise to 61.3 for the month of March.

But thanks to a Covid-driven manufacturing boost, the ISM’s data showed a major “beat.” Manufacturing accounts for roughly 11.9% of the total U.S. economy.

That certainly bodes well for a continued recovery if these levels can be maintained, along with low rates.

“The reopening of the U.S. economy continues to support equity markets as the light at the end of the coronavirus tunnel draws near,” explained Craig Johnson, technical market strategist at Piper Sandler.

“Fiscal and monetary policy support remain unprecedented and well-telegraphed at this juncture.”

In other words, bulls (mostly) know why everyone’s at the “trough.” The Fed’s keeping things easy-breezy and states are lifting Covid restrictions.

Bank of America equity strategist Savita Subramanian is concerned over the coming corporate tax hikes, however, which will eventually arrive with Biden’s infrastructure bill.

“I think the market is pricing in the good news of infrastructure […] I don’t think the market has necessarily priced in the negatives, which is how are we going to pay for this,” Subramanian said.

Still, almost all signals are pointing up, except for volatility. 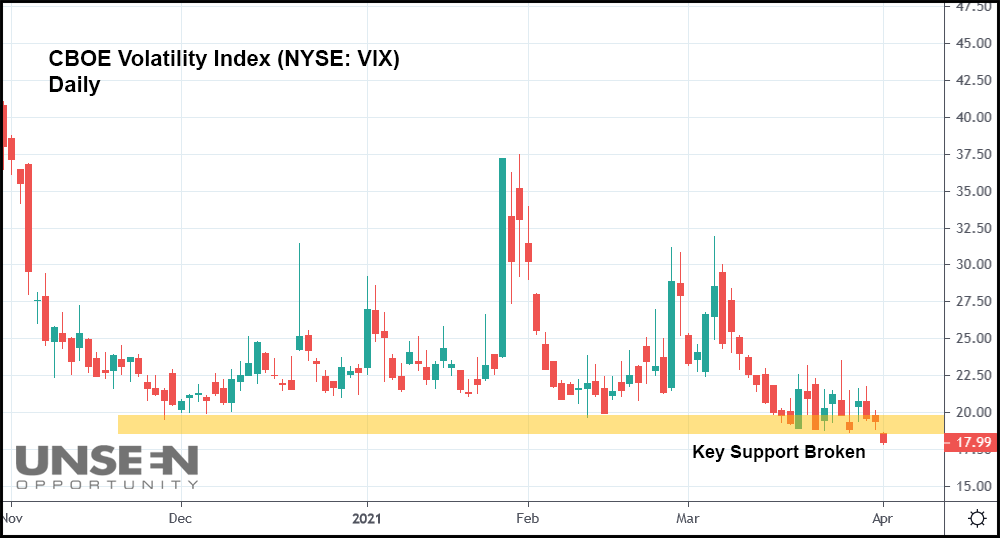 The CBOE Volatility Index (NYSE: VIX) got crunched today, plunging below key support in a pre-Easter slump. The VIX has flirted with crossing this support level over the last few months, but never could do so due to rising Treasury yields.

Now, with yields subdued and tech stocks surging, the VIX is sinking. The old VIX adage says that when “the VIX is low, it’s time to go.” It could hint at a coming correction if it holds true yet again.

But in this case, the VIX isn’t really that low. The index is low relative to its pandemic highs, but when compared to 2019, it’s still somewhere in the middle. 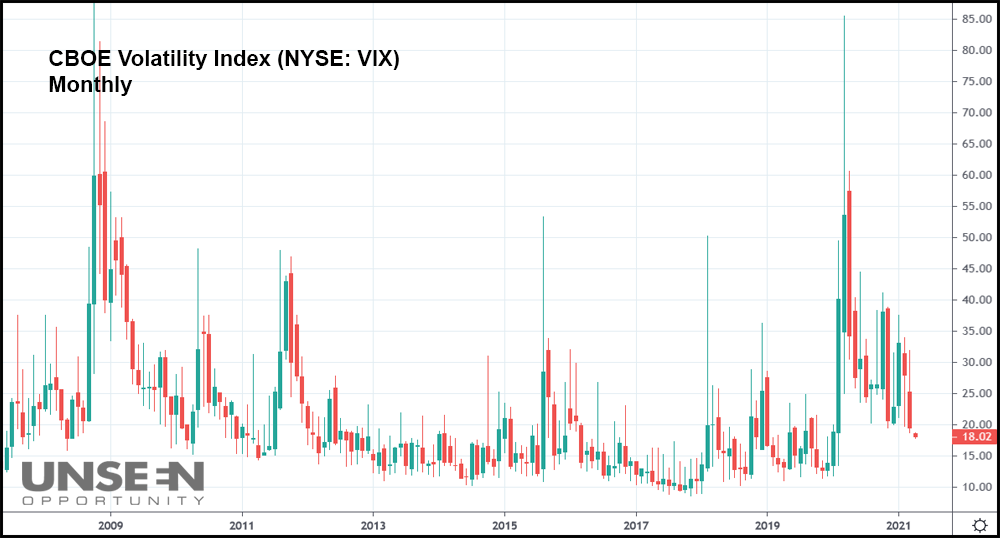 This means bulls might want to hold on a little longer before bailing on their positions. Outside of inflation, the market’s major short-term worries are being defused left and right. Sure, the whole financial system has been poisoned by a glut of liquidity and stimulus, but those are long-term problems.

In April, everything is awesome. And why shouldn’t it be? The West is at the apex of its “free money” society. The Fed recently signaled it would be comfortable with negative rates, just like in Europe.

That could ultimately mean rates won’t ever go up again. At least, not in our lifetimes.

So why not load up on equities? The casino’s rigged for the gamblers right now. It only makes sense to roll the dice.

Especially when it comes to growth-hungry tech names (FAANG), most of which are headed for a post-Easter comeback that’s likely to drag the general market even higher.