Stocks fell this morning as tech endured the worst of the losses. Bitcoin got smashed over the weekend, too, meaning almost every investor – involved in digital currencies, equities, or otherwise – is feeling some pain.

“Whenever a headline-grabbing asset sees a big decline at a time when the broad market stands at an expensive level, it usually has a negative impact on the stock market even if it’s only short-lived,” explained Matt Maley, chief market strategist at Miller Tabak.

Even gold, which finally enjoyed a resurgence last week, is down. It seems like nobody’s buying anything today.

And that could be a major problem with so many assets trading at or near record highs. The S&P is currently down roughly 0.50% as of noon. It hasn’t logged a daily loss of that magnitude since late March during a short, 8-day correction.

The index was trading at an all-time high in March as well prior to its 3.50% peak-to-trough tumble. When the market eventually settled, however, a major (still ongoing) rally followed.

That has Wall Street optimistic about a bull run extension despite today’s losses and how overbought stocks appear.

“While investing at all-time highs may be daunting for some, we believe there is more upside ahead,” wrote UBS analysts in a note to clients.

“Following two rounds of stimulus deployed in the quarter and the ongoing vaccination effort, there is growing evidence that U.S. economic activity is picking up. The latest jobs data, business sentiment readings, and retail sales all point to a strong recovery.”

Bank of America strategists identified value stocks as the way to go, regardless of whether equities experience additional weakness or growth keeps rising.

“Stick with value,” the bank said in a note.

“Steep discount vs. growth despite the recent strength.”

The reassuring comments from Wall Street all certainly make sense. But they don’t touch on an increasing nervousness being exhibited by investors. Only JPMorgan’s Andrew Tyler covered this with remarks released on Friday, in which he highlighted divergence between the VIX (equity volatility index) and the MOVE (bond volatility index). 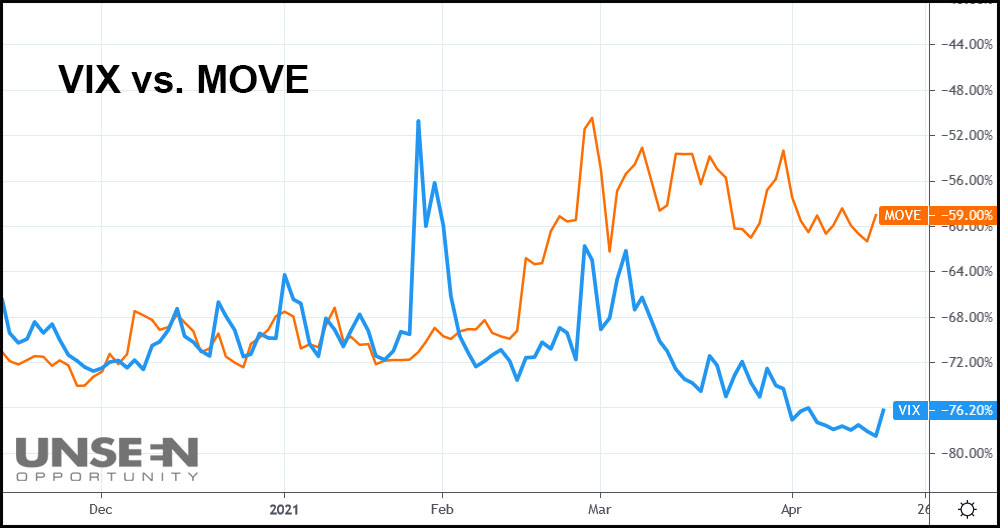 Tyler then called attention to the CBOE’s put/call ratio, which suddenly spiked on Friday. Today, it moved even higher.

“The combination seems to suggest an increasing nervousness among investors,” Tyler said.

“This dovetails with client conversations that, while expecting a robust earnings season, increasingly worry about a potential market pullback in May/June.”

If today’s selling continues, JPMorgan may have to shift that correction timeline to late April. Other JPMorgan strategists recommended staying long but adding hedges.

And so, the cracks are starting to slowly (but surely) form. Yes, it’s only one day of selling. What’s more, the market could rip higher by the close.

Traders have witnessed this phenomenon time and time again in the post-Covid, post-stimulus market.

But these days, bulls are running out of good news. Stellar earnings have largely been priced-in and more stimulus isn’t coming for a long while.

It has investors collectively putting one foot out the door. And at the next sign of trouble, that hesitation may snowball into a stampede for the exit.

Even if economic conditions in the U.S. continue to improve.