Stocks opened for a sizable gain this morning as the market looked to close out a bullish week at a new record high. Dow components led the way while the tech-heavy Nasdaq Composite followed closely behind.

Most notable, however, was the sudden surge in yields. The 10-year Treasury yield jumped to 1.3% from a 5-month low of 1.13% earlier in the week. This steepened the yield curve, easing economic fears in the process while boosting bank stocks. This optimism leaked into other sectors as yet another major sell-off seems to have been avoided.

“We expect markets to remain choppy, but a fundamental justification for more aggressive selling is missing,” explained Barclays strategists in a note to clients.

“In fact, the strong rebound since Tuesday shows animal spirits are intact.”

Shifting things slightly less bullish was the newest US Composite Purchasing Managers’ Index (PMI) from Markit, which provides a snapshot look at economic business conditions in the US. It nudged sentiment lower after a worse-than-expected monthly drop. 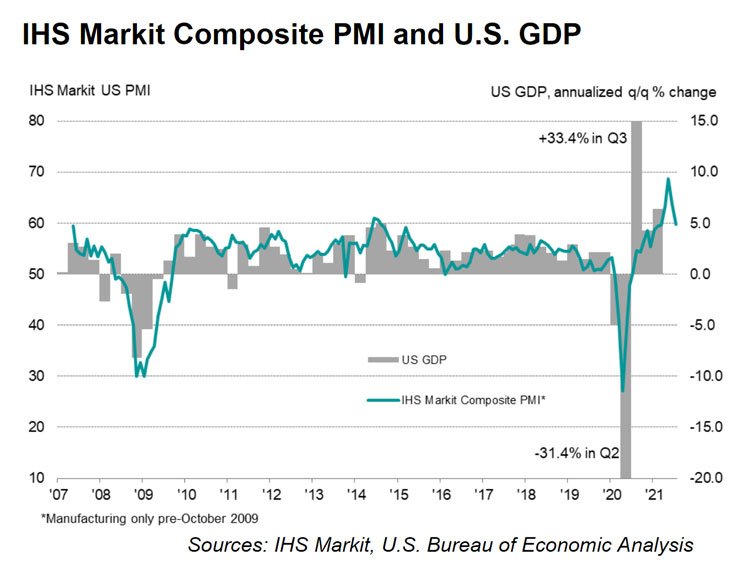 The index fell to 59.7 in Markit’s latest reading, hitting a 4-month low. But to Chris Williamson, Chief Business Economist at IHS Markit, there’s little reason to be worried just yet.

“The provisional PMI data for July point to the pace of economic growth slowing for a second successive month, though importantly this cooling has followed an unprecedented growth spurt in May. Some moderation of service sector growth in particular was always on the cards after the initial reopening of the economy, and importantly we’re now seeing nicely-balanced strong growth across both manufacturing and services,” Williamson said.

“While the second quarter may therefore represent a peaking in the pace of economic growth according to the PMI, the third quarter is still looking encouragingly strong.”

He then added that while inflationary pressures are rising, they seem to finally be peaking. Input cost and selling price gauges fell for a second month in July.

However, Williamson also said that the recent reduction in supply constraints doesn’t necessarily mean prices will come down for suppliers any time soon. Significant uncertainty remains for many US businesses, which has led to a drop in business optimism.

“The concern is this drop in confidence could feed through to reduced spending, investment and hiring, adding to the possibility that growth could slow further in coming months,” Williamson concluded.

But will these concerns impact stock prices in the short-term? Probably not. Investors are still focused on quantitative easing (QE), Treasury yields, and the Covid delta variant. The latter of which has become a recent obsession in the media.

If delta cases continue to accelerate, you can be sure that bulls will pull back slightly. Governments have already started to reactivate lockdown measures.

In the end, though, a pandemic “reboot” may be just what the doctor ordered for the US economy. The Biden administration will have a new excuse to authorize trillions more in stimulus. The Fed will gladly keep its foot on the gas, too, in terms of bond-buying.

So, even if the Covid delta variant knocks equities down a peg or two next week, they should ultimately rise again once it becomes clear that monetary policy will remain extremely dovish. Which, these days, is an absolute necessity in order for the market to hit new highs.