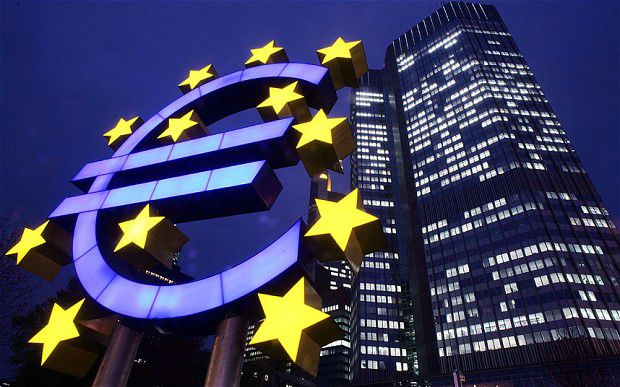 With the Dow sliding more than 200 points during this morning’s trading session, the fun may finally be over after the European Central Bank (ECB) slashed its economic growth forecast for 2019.

The previous estimate (made back in December) predicted a 1.7% expansion rate for Europe’s economy, but has since been reduced to 1.1% as of earlier today – marking a 35% drop amid weakened conditions.

In response, the market continued it’s 4-day skid, as all the major indexes felt some serious pain on the news of the reduced ECB projections. The S&P 500 and NASDAQ Composite both sunk below their 200-day moving averages as well, causing many technically-minded traders to jump ship.

In addition to the revised forecast, the ECB also made some changes to a long-term refinancing plan set to provide relief to European banks. Scheduled to start in September, the LTRO-III (longer-term refinancing operations) stimulus package will likely run until March 2021, in the hopes of prodding along a sluggish European economy. It’s the third cash injection from the ECB since 2014, and fits with the low-interest-rate doctrine adopted by the rest of the world’s central banks (the Fed included).

Peter Cardillo, chief market economist at Spartan Capital Securities remarked that “they’re basically admitting the economy is quite soft. This adds to one thing: uncertainty.”

And though market uncertainty may be rattling investors across the globe, there is one thing that almost everyone knows (or should know) for certain:

The banks are still broke, and it seems like we’ve learned nothing since the last financial crisis.

Take the Bank of Canada, for example, who’s leadership admitted that there was “increased uncertainty” around future rate-hikes. The Fed is taking a more “patient” stance when it comes to raising rates.

They’re all concerned that the economy slowing, and if it really is, then central banks need to start preparing for a state of emergency by unloading their balance sheets. Failure to do so will leave these institutions with no ammo to fight back against a much-feared economic contraction if it actually happens.

Cheaper debt right now isn’t going to save us from a slowing economy, which by the way, is a natural conclusion of the rip-roaring growth that we’ve enjoyed for the last few years.

What the central banks are ignoring at the moment is that if a slowdown truly is coming, there’s nothing we can do to stop it without mortgaging our future.

Yes, the rate-busting stance they’ve taken these days may delay the inevitable, but by keeping rates in the basement for so long, central banks are just building up our “house-of-cards economy” higher and higher, making a potential collapse that much more spectacular.

The markets and global economy are exhausted at the moment, and if they’re not allowed to exhale naturally, investors could be in for a world of hurt.

Will the central banks change their tune? Probably not, especially as they now all seem to be on the same page – when one makes a policy shift, so does another.

The Fed got this party started back in early January, and now the ECB is following suit. Whoever “flips” next could drive down equities even further, as more banks capitulate in the face of weakened economic indicators.

If that happens, the post-Christmas rally might finally be done, and once investors realize that, a major correction could be on the horizon – one that bears have been waiting on for a long time now.