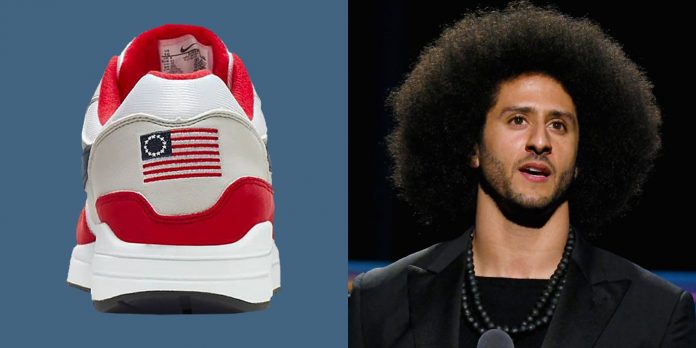 As of today, they’ve officially traded in their laces – shifting from athletic apparel to the business of generating controversy.

In a shocking move that’s sure to anger nearly every middle-American in the country, Nike announced plans last night to pull a new pair of sneakers featuring the Betsy Ross American Flag.

Why, you may ask?

Because Colin Kaepernick – the original anthem-kneeler – doesn’t like them. The flag, in his opinion, represents oppression, racism, and bigotry.

Yes, that’s right, the Colin Kaepernick. The Nike-sponsored “athlete” who hasn’t played a single down of professional football in nearly three years.

And even though he’s well past his playing days, he’s still a Nike cash cow because of his ability to generate reactions from the mainstream media.

Believe it or not, Nike could care less about Kaepernick’s “cause”. They aren’t in it for the social justice, just the edgy branding that that stems from the ensuing controversy.

Nearly every month, a new headline hits the presses about something Nike did to support Kaepernick’s crusade. And each time that happens, the sneaker giant gets free publicity – achieving “top of mind” status with minimal effort.

That’s not to say it doesn’t come at a cost, though. After all, there is no free lunch.

And investors, by and large, don’t like it when Nike misbehaves. NKE shares fell 1% in premarket trading this morning, and as of midday, they’re down roughly 0.30%.

But in general, it’s a small price to pay. The last few times Nike was “naughty”, their stock fell slightly over the following 1 or 2 trading sessions.

However, in the end, those short-term pains resulted in long-term prosperity. NKE shares have gotten dangerously close to major corrections on several occasions.

But the stock ends up escaping, somewhat unscathed, every time. Because the Nike brand has simply grown too strong for bulls to ignore.

And since adding Kaepernick to their stable, it’s become nearly bulletproof. Can Adidas generate the same kind of hysteria?

Absolutely not. In fact, there’s really no other former athlete that draws as much attention as Kaepernick does. Hated by many, loved by some.

Moderately liked by nearly no one.

And that’s the key. Nike isn’t looking for milquetoast personalities.

They want the extreme, men and women who constantly test the constraints of socially acceptable discourse on a daily basis. Getting those athletes (current or former) to represent the company will keep them in the perpetual limelight.

And for Nike bulls, that’s great news. Who needs high-profile ad campaigns when you’ve got a hype-machine in the form of Kaepernick?

Keep him dressed in the infamous Nike swoosh, and he’ll give you the world.

So, as much as people would love to pat Nike on the back for being America’s biggest “woke” corporation, their true intentions are far more nefarious.

Having Kaepernick as “kept man” is huge for the once humble west coast shoemaker. And until he stops producing headlines, they’ll continue with their sponsorship.

At least until the mere sight of Old Glory no longer ruffles his feathers.