The electric automaker posted a record net income of $438 million in Q1. It beat earnings and revenue estimates as well thanks to regulatory credits and well-timed Bitcoin trades.

In short, car sales did not drive Tesla’s record-setting quarter. TSLA dropped over 4% in response to its Q1 earnings and continues to struggle in 2021.

Outside of tech, though, some companies have received a far more positive response. UPS (NYSE: UPS) scorched higher after it reported a 27% surge in Q1 revenues. The stock gained over 9% in just a few hours.

Reopening-sensitive stocks (like UPS) are having a good day, too. Department stores are up big. Speculative plays are also rising.

GameStop (NYSE: GME), which notoriously started the short squeeze craze several months ago, seems to be right back at it. Other “squeezable” names like AMC Entertainment (NYSE: AMC) and Penn National (NYSE: PENN) are up as well.

More importantly, the retail crowd hasn’t lost its taste for high-risk trades just yet. And while that may be encouraging for “underdog” investors, it’s also the kind of behavior that precedes major market calamity.

These days, investors are expected to make absolutely reckless moves in order to get ahead. That includes buying far out-of-the-money options on thinly traded, highly volatile stocks. It’s more akin to gambling than investing, but a large portion of traders have grown comfortable with this brand of risk.

Once-novice investors, now armed with Robinhood margin accounts, are seeking the next stock eruption. They want easy money without the research, time, or dedication that typically accompanies a successful approach to trading.

This mindset has driven some to chase over-the-counter moonshots, targeting minuscule stocks with multi-day pump and dump schemes. And though it’s true that they reward a small number of speculators, the majority are left high and dry.

But this is the “churn” that the market is currently caught in. Those that can tolerate “mega-risk” reap the rewards while everyone else keeps pace with inflation.

Which, by the way, has driven the Bloomberg Agricultural Spot Index to an 8-year high. 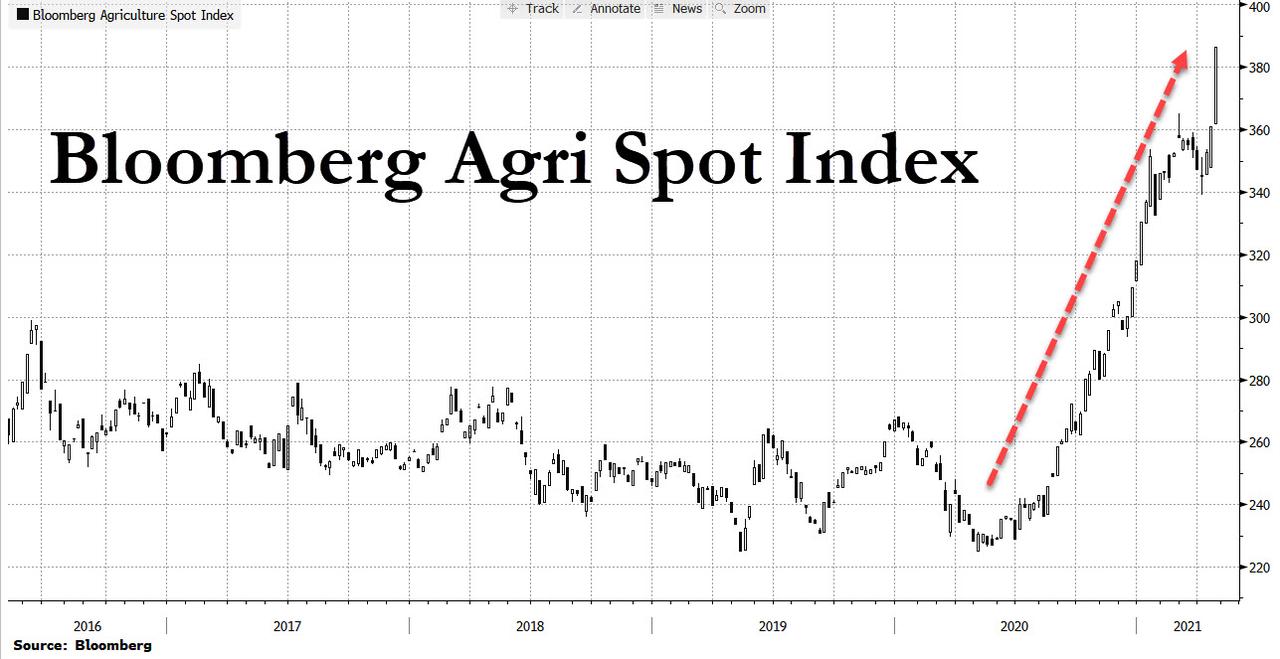 But that’s not all; rising agricultural prices eventually show up in the costs of finished food – a large component of Asian consumer price indexes (CPI), where more than half the world’s population resides.

This massive inflationary impulse should cause wage costs to surge in Asia. China, Japan, South Korea, and India account for the vast majority (37%) of global manufacturing output. Asian wage and CPI increases would work their way westward over time, making sure that no one is safe from rising prices.

On Friday, when the Fed receives its favorite inflation print, Fed Chairman Jerome Powell is likely to say that everything’s under control.

And, more importantly, that inflation has yet to leave the Fed’s “comfort zone.” Nor will it do so any time soon.

But evidence continues to build suggesting that’s simply not the case. Hopefully, a “come to Jesus” moment happens before inflation rocks the West. Central banks aren’t showing any signs that it will, however, given their recent actions.

That should have investors skeptical about the future. Maybe even worried about what to do with any cash they have that’s uninvested. With stocks teetering near their all-time highs, though, plowing more funds into equities doesn’t appear to be the right move, either.

It’s a “damned if you do, damned if you don’t,” situation, growing worse by the day on persistent liquidity, stimulus, and head-in-the-sand decision-making from first-world leaders.