Stocks traded higher this morning after closing flat in the session prior. The Dow, Nasdaq Composite, and S&P all enjoyed moderate gains shortly before noon.

The question now is whether this is the start of a bullish continuation, or simply a “dead cat bounce.” 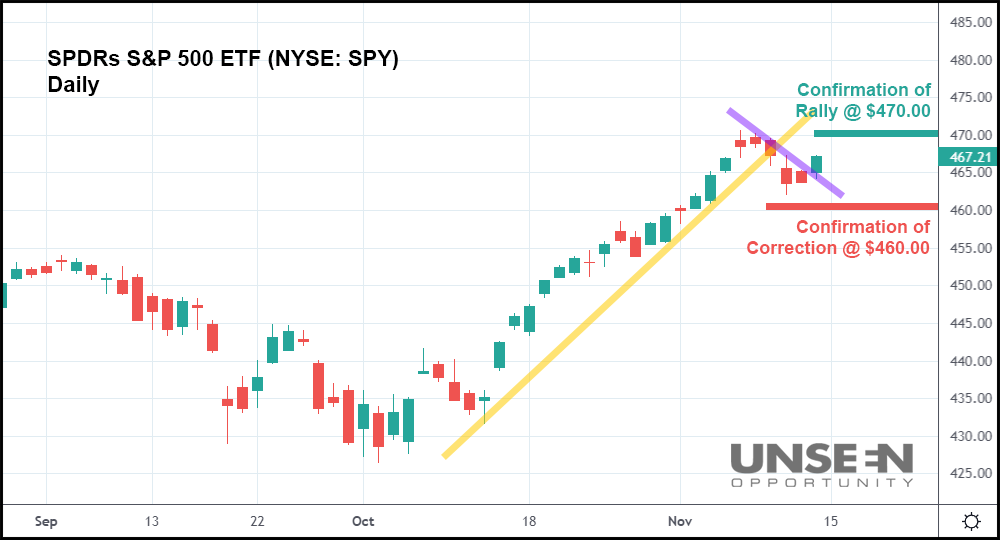 The S&P, as represented by the SPY, is at a crossroads. The index closed outside of its bullish October trend lows (yellow trendline) two days ago. Then, today, it jumped above its minor bearish trend highs (purple trendline).

If the SPY falls below the low of Wednesday’s bearish breakout, a correction would likely be confirmed. Alternatively, a rise above today’s high (currently $467.22) would confirm that a rally could soon follow thereafter.

Keep in mind also that November’s options expiration (OpEx) date is approaching on the 19th. In June, July, August, and September, the market plunged shortly before each month’s respective expiration dates.

October was the exception.

And with single options trading activity at an all-time high, next Friday’s OpEx could be yet another explosive one.

Especially considering how quickly the market climbed in October.

“We’ve got a market that is just incredible. No matter what it’s going up, and that shouldn’t be much a surprise given how much money has been pushed into the system,” explained Lenore Hawkins, Tematica Research chief macro strategist, referencing last month’s major run-up.

“There’s just a lot of money chasing not a whole lot of alternatives.”

“Consumer sentiment fell in early November to its lowest level in a decade due to an escalating inflation rate and the growing belief among consumers that no effective policies have yet been developed to reduce the damage from surging inflation,” said the survey’s chief economist, Richard Curtin.

“Rising prices for homes, vehicles, and durables were reported more frequently than any other time in more than half a century.”

It’s clear that inflation has taken its toll on consumers. But even worse than the Consumer Sentiment Index was the Labor Department’s September quits report, which was also released today. 4.43 million Americans quit their jobs two months ago, bringing the quits rate (vs. the total labor force) to 3%. It was the most monthly quits ever measured by the Labor Department.

The data shouldn’t have come as much of a surprise given September’s poor jobs report. But still, it’s an inauspicious sign for bulls as the market lingers near its record high.

As a result, more volatility is likely on its way. It’s something that should ultimately frustrate traders looking for signals to get long, short, or just get the heck out of Dodge before they’re whacked by another “flash crash.”

On the other hand, the market has been able to handle periods of high volatility in the past. Stocks eventually made new highs quickly after volatility slowed on each occasion.

They’ll probably do the same thing when the next volatility wave hits equities.

But it won’t be comfortable when one inevitably comes. Least of all for bulls, who continue to buy near the top.