Stocks are slipping today as bulls take a step back from the ongoing rally. Big Tech, on the other hand, continues to rise. FAANG’s “in the green” this morning while cyclical sectors are down.

Energy and financials endured the worst of the initial selling, falling 2.4% and 0.5%, respectively. Both groups of stocks are still up on the month.

And on Wall Street, analysts remain split on where the market’s headed next. Bank of America’s convinced that a dip is quickly approaching.

“We expect a buyable 5-10% Q1 correction as the big ‘unknowns’ coincide with exuberant positioning, record equity supply, and ‘as good as it gets’ earnings revisions,” remarked B of A strategist Jared Woodard.

In a note to clients from JPMorgan, bank analysts said the exact opposite.

“Biden is going for the full $1.9T and, as of now, is not succumbing to pressure to reduce the size of the bill to accommodate the GOP nor centrist lawmakers who may be at-risk in 2022 elections.”

“The completion of earnings season combined with a fiscal package becoming law may create the next leg higher in equities, adding fuel to the reflation/cyclical trade.”

Other strategists agree with JPMorgan’s sentiment.

“The outlook for stocks continues to get more positive in the near term, plain and simple,” explained Sevens Report founder Tom Essaye.

“The stock positive formula of Massive (and unwavering) Fed support + Massive new fiscal stimulus + COVID declining and vaccine distribution ramping up is becoming more real, and stocks are rallying as a result.”

Essaye’s right; bullish forces are converging on the market. And almost all at the same time.

The Fed’s backstopping of equities isn’t expected to end, either, meaning that equities should remain a “bull’s playground” for the foreseeable future. Even the current earnings season is going extremely well, with the vast majority of S&P 500 companies beating their earnings per share (EPS) estimates.

However, that could simply be the result of overly pessimistic analysts and not necessarily strong Q4 performances. S&P stocks are currently trading way above their next-twelve-months (NTM) EPS. From 2018 to early 2020, stocks traded below NTM EPS.

The relationship flipped back in March when NTM EPS dove under the index’s returns. It’s been stuck there ever since. 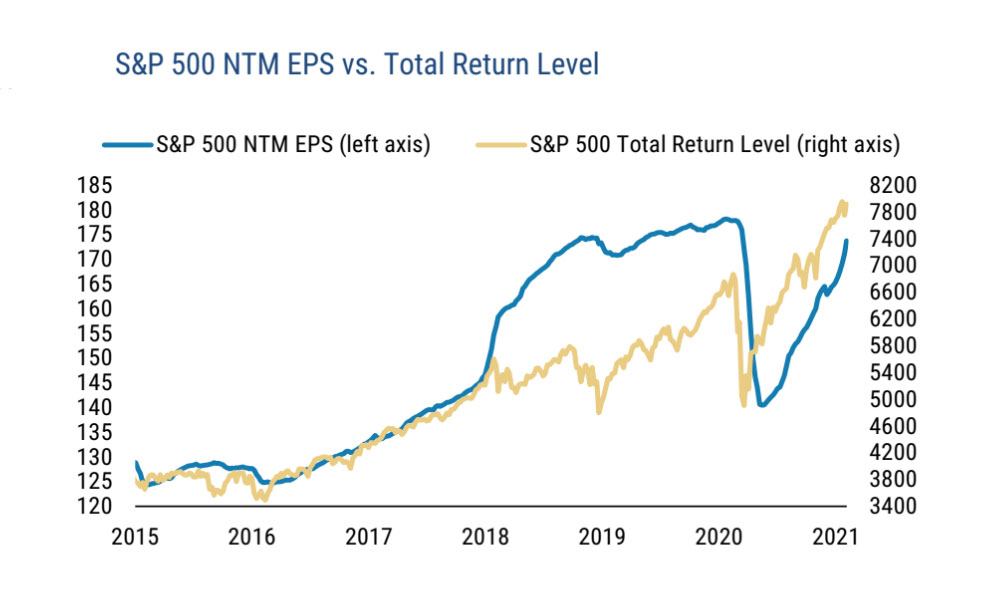 Two things could be happening here:

Either the analysts are completely wrong about what’s going to transpire over the next year, or S&P stocks are overvalued.

The reality is that it’s likely a combination of both. 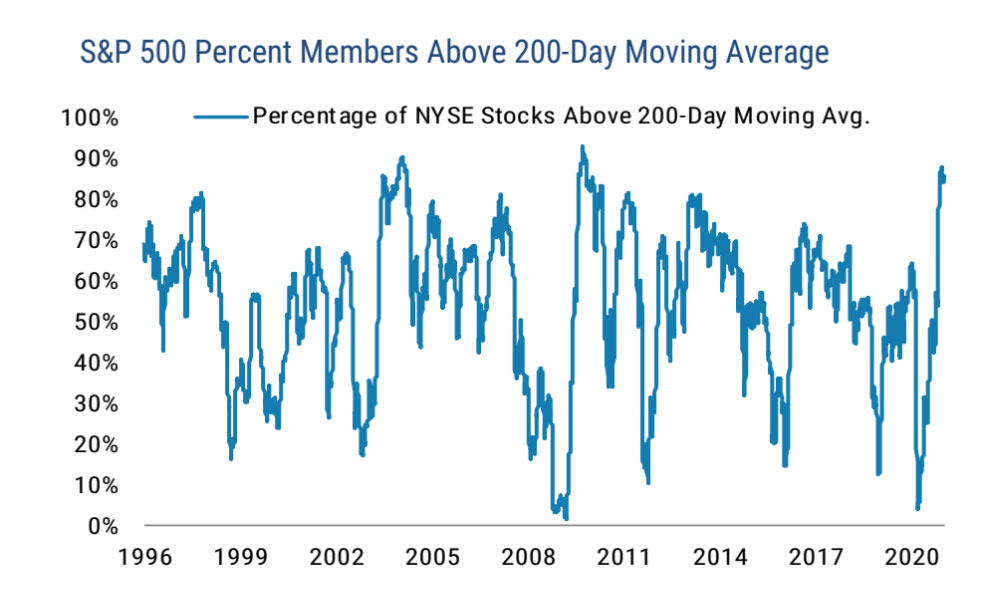 Almost 90% of S&P stocks are trading above the 200-day moving average. Investors witnessed similar ratios back in 2005 and again in 2010 following some of the market’s worst crashes.

Moreover, after reaching those levels, the S&P entered longer-term consolidation phases. It took over a year for the index to eventually surpass the 2005 high, and almost 8 months to do the same in 2010.

So, does that mean investors have another consolidation to look forward to in 2021? They certainly might. But until the good times are over, bulls should stay long.

What separates the current market from its post-crash rallies of the past is its truly unprecedented support from the government.

Yes, the whole financial system is teetering. And yes, the dollar has an impending showdown with inflation.

That doesn’t mean investors should bail completely, though. Because while being wrong about the next leg up would prove painful, missing it completely would be devastating. There are plenty of bears, believe it or not, who haven’t gotten long since the market crashed in March.

They’re still waiting for that next downturn. And they’ll eventually get one.

But only after they’ve missed the market’s quickest recovery on record, driven almost entirely by a liquidity-drunk Federal Reserve.