Stocks are stalling today as investors await comments from the most important man in America.

“It is no exaggeration to say that this FOMC meeting has the potential to be the most important one in years as the market is effectively demanding action from the Fed to counter the recent spike in bond yields,” said Tom Essaye, founder of the Sevens Report, in a note.

Bulls are getting nervous as Treasury yields rise, too. The 10-year Treasury note yield smashed through to a new 13-month high today, hitting 1.683% shortly before noon. The 30-year rate is up as well, to 2.428%.

The S&P, Dow, and Nasdaq Composite are all down in response. Tech shares have endured the bulk of the selling. Growth stocks (like tech firms) tend to get wounded more by higher rates.

Investors will be primarily focused on the “median 2023 dot,” which represents where the FOMC wants the federal funds rate to be by the end of 2023.

Goldman Sachs plotted the median dot from the FOMC’s December meeting, right alongside its expectations for today. 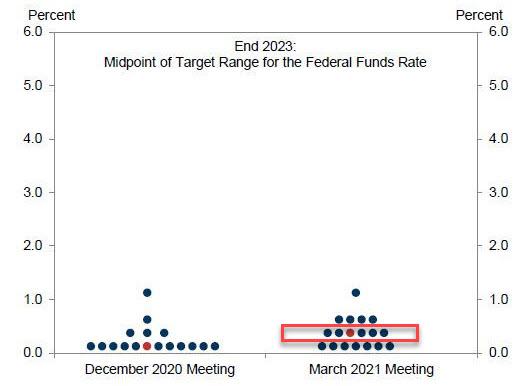 Goldman believes that the median dot will rise slightly and far more FOMC members (11) will move above the near-zero threshold.

If that happens, analysts on Wall Street expect some knee-jerk selling even if it’s the right move long-term.

“There’s this assumption [Powell’s] going to be dovish […] With another round of spending, it’s hard for him not to be dovish. They are definitely afraid of scaring the market. They’re afraid of disrupting the recovery,” explained Peter Boockvar, chief investment officer of Bleakley Advisory Group.

“Generally speaking, I think the best move is no move,” Manley said.

“Certainly, we’re not going to see any immediate changes to policy, but I think markets are kind of anxious about the language that the Fed will be using to account for the fact that things have been a whole lot better than I think initially anticipated since at least their last meeting.”

“So, the best thing I think we could get out of the Fed is an acknowledgment that growth is picking up, that the recovery story is more durable, that the worst is behind us but that there is no immediate pressing risk of inflation […] that’s the green light for investors to keep this party rolling.”

Inflation is the one variable that economists aren’t quite ready to agree upon. February’s Consumer Price Index (CPI) reading revealed a tepid 0.4% increase in core inflation. Many analysts took that as a sign that inflation remains somewhat in check, as the number fell right in line with the Dow Jones estimate.

But the U.S. Bureau of Labor, which is responsible for tabulating the CPI, clarified that the data may be total bunk. The February CPI was measured with incomplete or missing information.

As a result, the Fed may be flying blind – something that may end up helping out bulls today when Powell provides his feedback on the state of the economy.

Fireworks are likely this afternoon, arguably regardless of what Powell says. And depending on how his comments are received, the market could go two directions:

Higher, en route to the next “leg up.” Or, lower, as part of a frustrating consolidation while Treasury yields continue climbing.