The market’s closed in observance of Martin Luther King Jr. Day, but that doesn’t mean Wall Street’s taking time off. Strategists from the world’s top banks released notes this morning on what’s to come in the week ahead.

And, almost across the board, analysts believe a major market transition will soon be underway.

“We expect a significant, and likely sustained, activity acceleration from Q2, which should benefit a number of cyclical and value sectors,” wrote J.P. Morgan’s Mislav Matejka.

“The move higher is likely to be driven by a surge in [circulated currency], continued policy support, pent-up demand, easy base effects and importantly the gradual easing in mobility restrictions as vaccine rollouts gather pace.”

Matejka, like everyone else, is waiting on a stimulus-driven rally. Aggressive fiscal policy is expected to push stocks higher even if it eventually raises interest rates to uncomfortable levels.

“Sectors and stocks that show the biggest shortfall in earnings vs pre-Covid-19 are likely to get a boost, especially those that show high positive correlation to [purchasing managers indexes].”

Bank of America’s Stephen Suttmeier echoed Matejka’s sentiment in his own commentary, released this morning. He also noted that “high beta (cyclical) leadership could last into 2022,” suggesting that this shift is not necessarily short-term in nature. 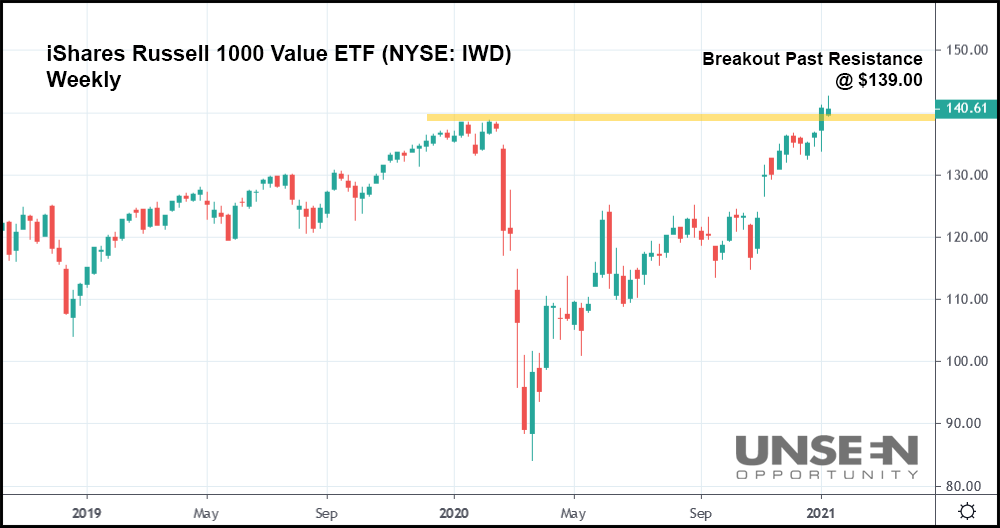 Looking at the iShares Russell 1000 Value ETF (NYSE: IWD), Matejka and Suttmeier’s theory seems valid. The IWD broke out above key resistance at $139.00 two weeks ago. Last week, it stalled slightly but managed to remain above its pre-Covid high. 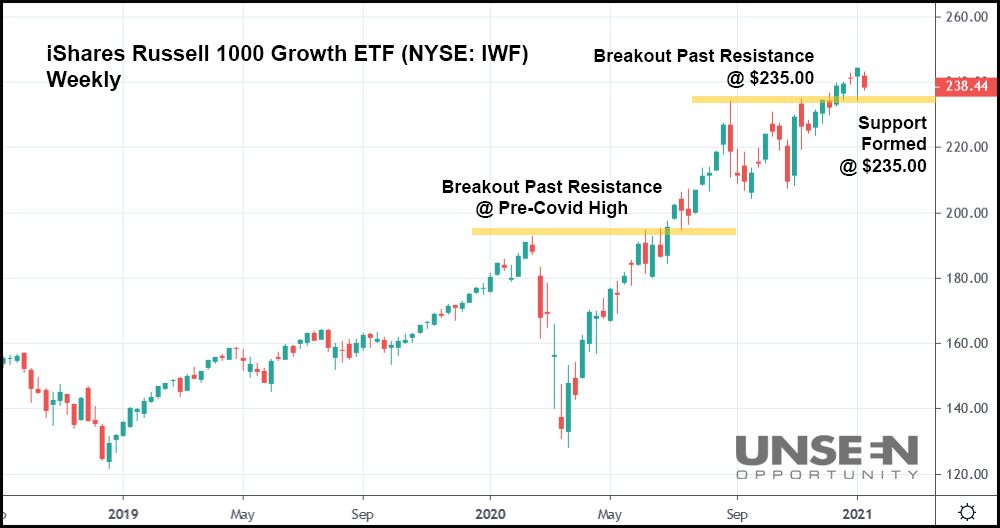 However, the iShares Russell 1000 Growth ETF (NYSE: IWF) is in an uptrend as well. The IWF blew past its pre-Covid high in July hasn’t looked back. It stalled in September, but ultimately beat resistance at $235.00 to close out the year.

Relatively speaking, growth outperformed value by a mile. And for most of 2020. 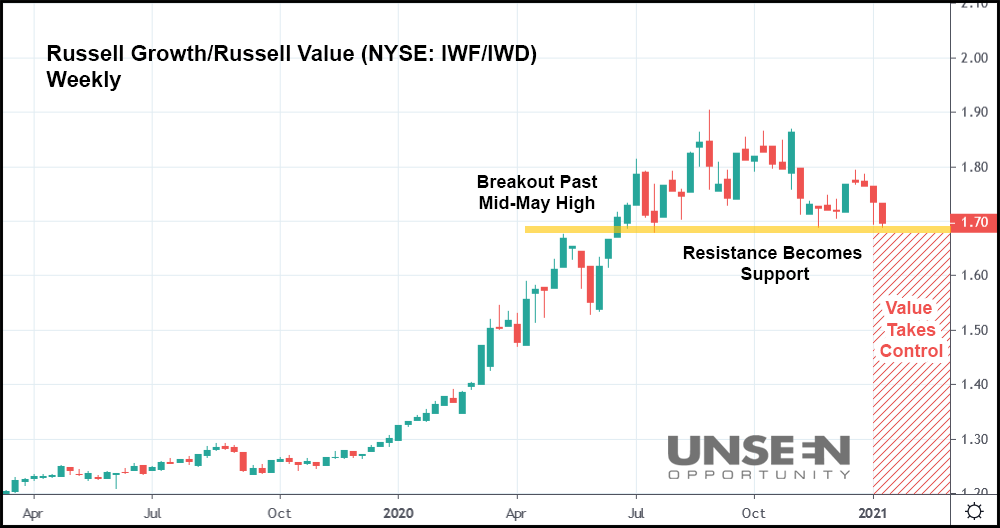 That’s reflected in the chart above, which divides the Russell 1000 Growth ETF by the Russell 1000 Value ETF. As growth beats out value, gains are made in the chart. The IWF/IWD ratio leaped above its mid-May high in July when growth stocks roared. But since then, growth has been unable to truly dominate as it did earlier in the year.

And after last week, the IWF/IWD ratio now sits squarely on support. A significant drop below support would suggest that value stocks are finally going to take control. Moreover, because the candlestick chart above is in weekly candlesticks, it could also mean that value will outperform growth for quite some time – something that Suttmeier believes is possible.

What this chart does not suggest, however, is that growth and value stocks will be inoculated from a short-term correction. Nor that value will rise while growth tumbles.

It’s highly likely that one group of stocks will outperform the other in the event of a downturn. Historically, value stocks have overachieved in that regard simply because they have less room to fall.

So, while the sinking IWF/IWD ratio may have bulls excited about going long on value, it could also mean that a market-wide slump is quickly approaching. Growth stocks should get wounded the most in the selling, dropping the IWF/IWD ratio well below support. Bulls that hide-out in value shares won’t be hurt as much by comparison, but they’ll still feel the pain.

Either way, though, it seems the market’s finally giving up on growth stocks after a massively impressive 2020, regardless of what comes next.

That includes another rally, or even a sudden “FAANG-crunching” correction in the near future.