Stocks resumed their climb this afternoon after stalling out yesterday. Better-than-expected jobs stats and a fresh batch of corporate earnings had bulls feeling confident once more.

If American companies continue to impress, the market could even surpass its recent highs from late January.

But that all depends on how future economic data – like tomorrow’s jobs report – is received.

Weekly jobless claims got the positivity rolling today when they came in below analyst estimates. First-time unemployment filings totaled 779,000 for the week ending January 30th, less than the 830,000 economists had expected.

Some analysts were quick to cheer the data as evidence of a coming share price surge.

“[Labor market data’s] driving another blast of ‘risk-on’ into equities,” explained Nomura’s Charlie McElligott in a note to clients.

“Cutting through the noise, we believe the labor market is essentially treading water,” Ruesterholz wrote.

“Over 60% of the jobs lost since February 2020 are in virus-sensitive sectors like hotels and education, which will not substantially boost employment until there is mass vaccination and larger-scale reopening, which will likely be in late Q2 and Q3.”

Bank of America’s take on the labor market was perhaps the most sobering of all.

“Friday’s jobs report should reveal a labor market that is back on the mends though still far from full recovery,” said B of A analysts.

“We expect nonfarm payrolls to grow by 200k in January after declining 140k in December. While we expect further job gains, we expect the unemployment rate to remain sticky at 6.7% as more workers reentered the labor force.”

And while it’s often been observed that Covid-sensitive industries were hit the hardest in terms of job losses, a different type of rift has formed as well:

The gap between low-wage and high-wage unemployment. 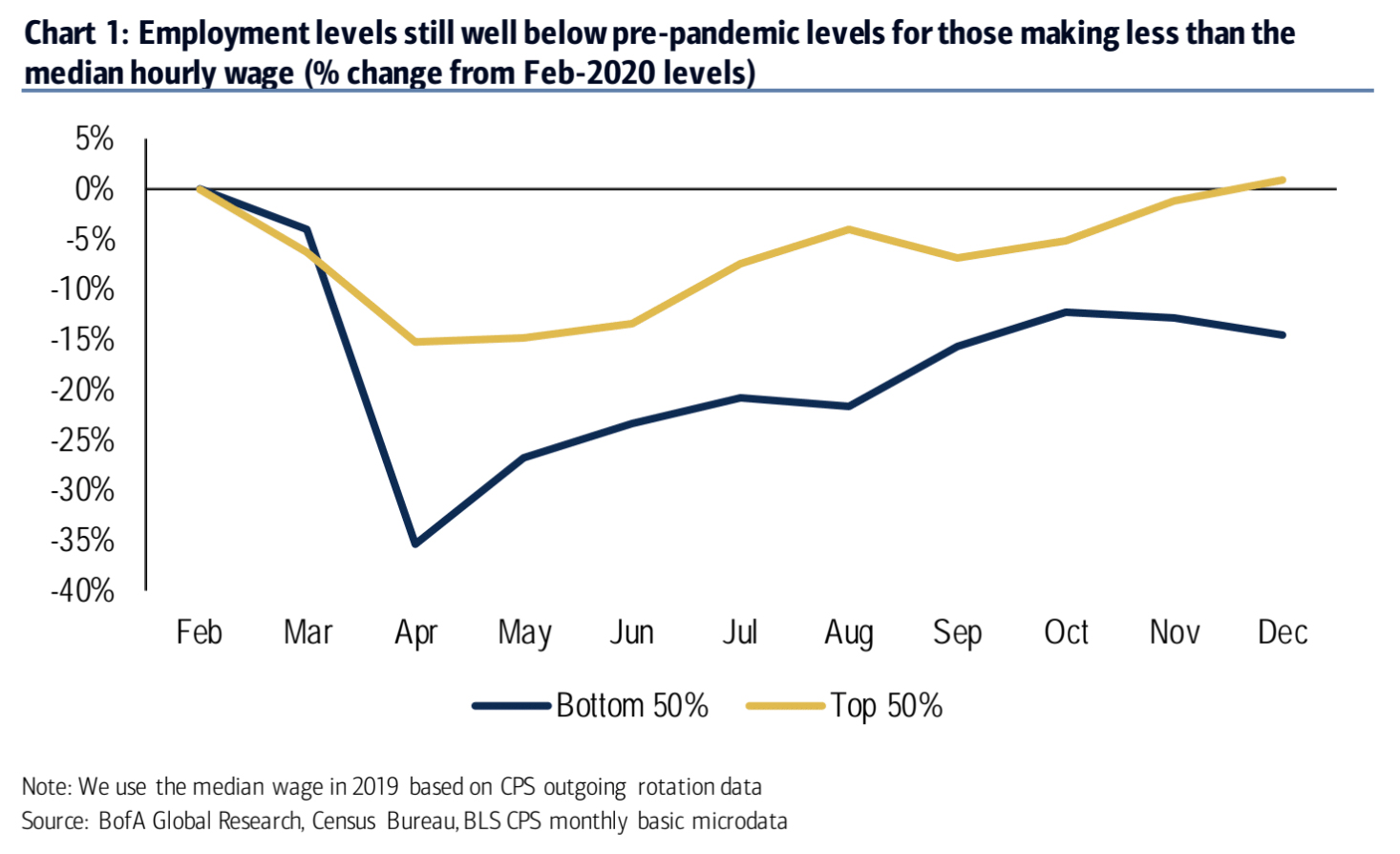 “Our calculations show that workers that earned less than the median hourly wage experienced significantly greater job losses at the start of pandemic and the recovery has been far more sluggish with employment 14% below levels seen prior to the pandemic in February 2020,” said B of A analysts.

“Meanwhile, workers that earned more than the median hourly wage experienced a more modest decline in employment at the height of the recession and employment levels are essentially back to pre-pandemic levels.”

This will undoubtedly make the Fed’s job more difficult as it tries to spur-on a full post-Covid recovery. The top 50% earners could easily overheat the economy if given too much fiscal ammunition, leading to significant inflationary pressure.

Conversely, if the Fed and Treasury department both back off, stocks would quickly roll over while the bottom 50% earners are left behind.

It’s an almost impossible problem to solve through monetary policy alone, and one that was created by industry-hobbling government lockdowns.  The solution to all of this, of course, is a complete economic reopening.

But until Americans – and American politicians, especially – conquer their Covid fears, nothing will change.

That should ultimately place the U.S. economy, dollar, and financial system on increasingly perilous ground even as vaccines continue to roll out.