Stocks fell again this morning as the market’s selloff continued. The Dow, S&P, and Nasdaq Composite all endured small losses, led lower once more by tech shares. Cleveland Fed President Loretta Mester dashed bullish hopes in a pre-market interview in which she said that she expects the federal funds rate to climb above 4% early next year. Mester then added that she doesn’t believe the market will see rate cuts until 2024 at the earliest.

This wasn’t necessarily a revelation for investors after Fed Chairman Jerome Powell and New York Fed President John Williams both delivered hawkish messages in recent statements. It was, however, confirmation that Fed officials are presenting a united front on fighting inflation “the right way.”

The Eurozone Consumer Price Index (CPI) was released this morning, too, showing that European inflation jumped by 9.1% year-over-year (YoY) last month, up from +8.9% YoY in July. The inflation reading also beat the consensus estimate of +9.0% YoY.

Goldman Sachs and Bank of America analysts are now predicting a 75 basis point rate hike from the European Central Bank in September as a result of this morning’s CPI release.

“We now expect the Governing Council to hike by 75bp at the September meeting. First, today’s inflation data surprised further to the upside, with headline HICP climbing to 9.1%yoy and, importantly, core HICP rising to 4.3%yoy, in another strong sequential monthly print,” wrote Goldman Sachs strategists in a note to clients.

“We expect inflation pressures to rise further in coming months as the 9-Euro ticket in Germany ends and high energy prices feed through into retail prices, with a peak in core inflation at 4.6% in September and headline inflation close to 10% in Q4.”

Wicked oil volatility was another issue for traders this morning. Investors had a hard time making sense of the commodity’s snap moves, which saw oil whipsaw wildly in either direction.

Oil’s intraday price action even prompted Pierre Andurand, the head of the world’s largest oil-focused hedge fund, to comment on it.

“Moving down $10 in a day for no apparent reason.”

Collapsing liquidity and a lack of hedging contributed to oil’s major swing today. Oil prices sunk before rallying in response to a release from the US Department of Energy stating that the US Strategic Petroleum Reserve (SPR) would sink to a 40-year low as the White House draws from it in an attempt to curb rising oil prices. 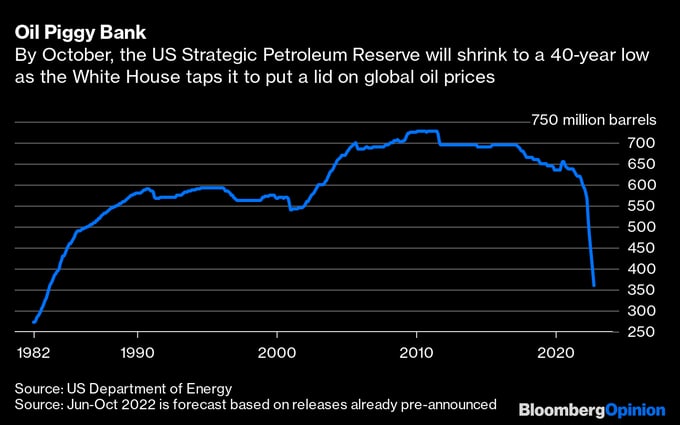 Every time the SPR comes up in the news, we observe that SPR withdrawals are unable to keep oil prices down for long (if at all). And sometimes, like today, they actually cause oil prices to spike.

The reason being that the government needs to replenish the SPR at some point. When they do, they’ll be forced to buy oil. And what happens when the government buys oil?

That’s not to say this will kick off an oil rally in the coming weeks, though. If anything, oil’s due to fall again after rallying in August.

But if it does tumble, the SPR withdrawals will have nothing to do with it. The SPR has been tapped repeatedly over the last two years with little impact on oil prices. 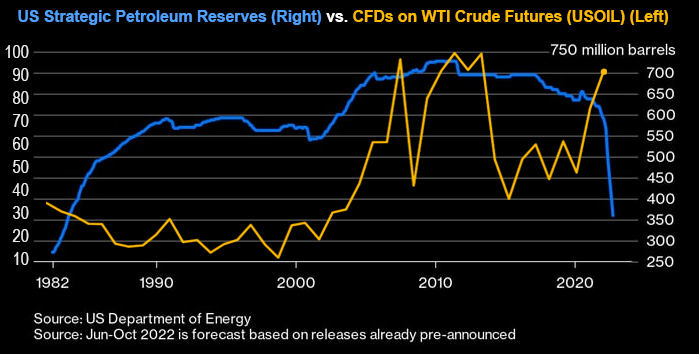 After we plotted WTI Crude (the US oil benchmark) on the chart provided by Bloomberg, there almost seems to be an inverse relationship between the two lines. That looks especially going back to when Covid first hit.

That suggests there’s only going to be more inflationary pain down the road when the SPR – a resource that was intended for wartime emergencies, not price control – gets refilled, regardless of whether the Fed has a handle on inflation by then.