Stocks traded flat this morning after finishing out April on a very bearish note last week. The major indexes all plunged Friday as the Nasdaq Composite notched its worst month since 2008. The tech-heavy index fell even more than it did during either month of the 2020 Covid crash.

Moving forward, investors of all sizes – both retail and institutional – are hoping for a recovery rally. And not just from tech.

“As we turn the calendar to May, we may see a short-term oversold bounce, however, we still have several reasons for concern. We believe our longer-term equity indicators are not yet oversold enough to have a high conviction ‘Buy’ call. We also believe managers have started to re-price stocks using recession-like multiples. If that is the case, we are still over-valued,” said MKM Partners chief market technician JC O’Hara in a note to clients.

Stanphyl Capital’s Mark Spiegel released his most recent letter to investors this weekend. In it, he explained why he believes the market has further to fall.

“The last time the 10-year Treasury yield was where it is now (approximately 2.9%) was December 2018 when the S&P 500 was around 2700 (approximately 35% lower than it is today), yet inflation was vastly lower (allowing much higher PE multiples) and growth prospects were far better,” Spiegel said.

“And although corporate earnings are higher now than they were then, I believe inflation expectations are in the process of substantially lowering the PE multiples placed on those earnings, as happened in the inflationary era between 1973 and 1975 when the S&P 500’s PE rapidly dropped from 18x to 8x. (Perhaps a move from 30x to 15x might be in order this time around.)”

“So I think this stock market is going much lower, and we thus continue to have a large short position in the S&P 500 via the SPY ETF (although I temporarily reduced the position size in late April, as the market looks a bit short-term oversold to me), as well as a large short position in Tesla, the biggest bubble-stock in this entire bubble era, which will soon be to electric cars what Blackberry became to smartphones: the pioneer that wound up with arrows in its back.”

Thus far, Spiegel’s bearish stance has paid off. His fund was up roughly 20% in April opposite the S&P, which sunk 8.5%. His take on Tesla (NASDAQ: TSLA) is intriguing, too, given how well the stock has done.

But it’s not entirely out of left field; plenty of analysts think TSLA is overvalued. The problem is, they’ve been saying it for years, now. TSLA’s value has only rocketed higher during that time.

Spiegel could be right. But history has shown that going short TSLA is a bad idea.

That’s also true for the S&P. In his letter, Spiegel observed that a short-term S&P rally could be forming, prompting him to reduce his short SPY position. 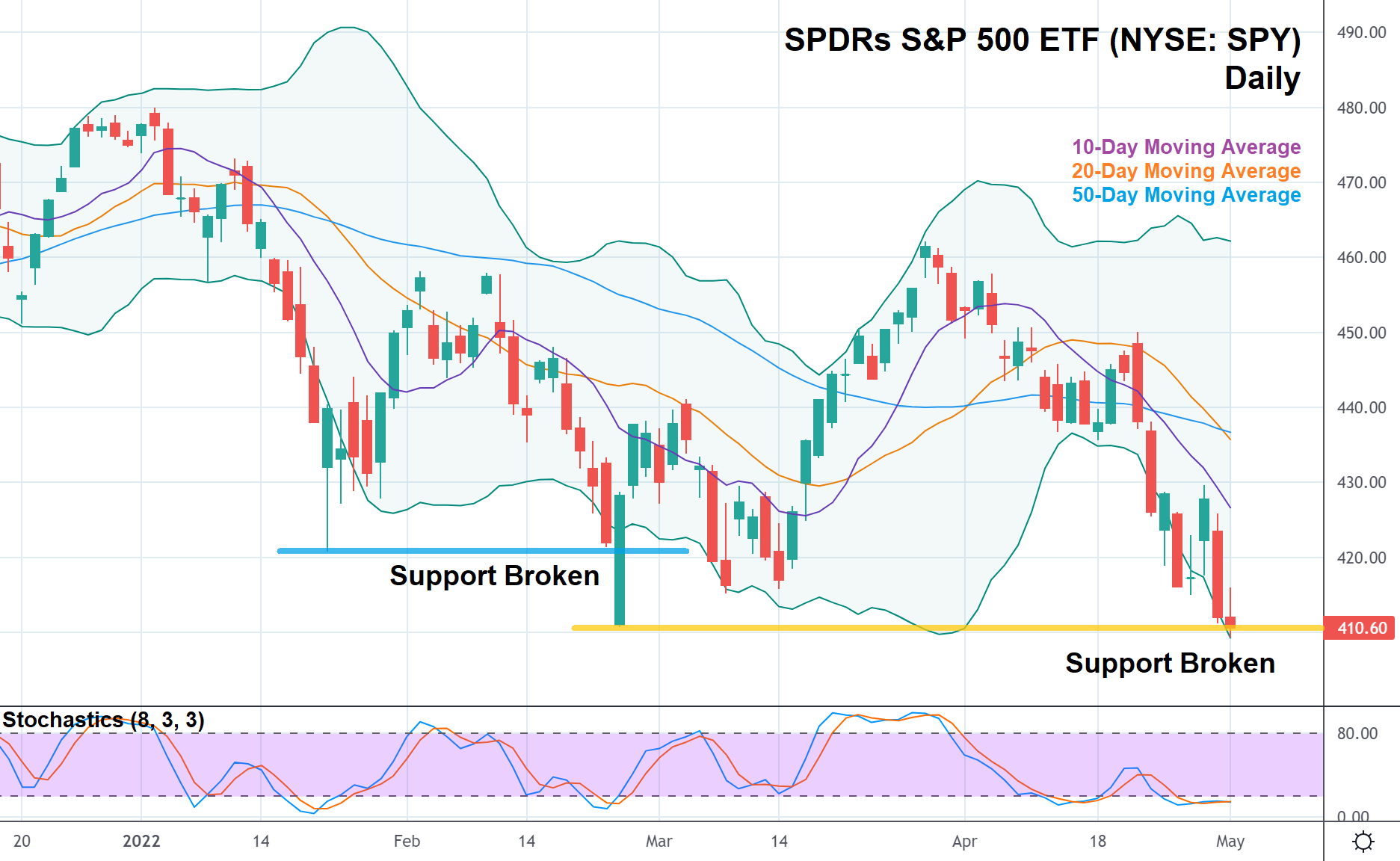 That’s probably a good choice given that one of Wall Street’s favorite buy signals just triggered this morning. The SPY temporarily traded below key support at the (former) 2022 low (yellow line) earlier today. The last time key support was broken was back on February 24th (blue line) in response to the Russian invasion of Ukraine.

Stocks jumped immediately higher and the SPY staged one of its largest intraday reversals on record. It ended up selling off again roughly one week later before ultimately rallying through late March.

A similarly vicious rally could be awaiting investors in May. The reason being that when support is broken at a round number (in this case, 410.00), massive blocks of exit orders are typically taken out. It’s human nature to favor round numbers, after all.

When the SPY dropped below 410.00 today, scores of traders dumped their long SPY positions with stops set just below 410.00. Now, with those positions wiped off the board, Wall Street has the green light to spark a “melt-up” to 460.00 – the last notable level of key resistance – or somewhere just short of it.

This “churn” is where Wall Street traders make their money during bear markets. They try to buy near the bottom of a sell-off before initiating a short-term bear market rally. These aren’t long-lived, but they’re sizable enough to generate some short-term gains. Wall Street banks have the portfolio sizes to move the market. They know this and use it to their advantage.

Meanwhile, retail investors get caught in the crossfire, buying high and selling low via unfortunately placed blocks of exit/entry limit orders (which Wall Street can see, by the way) near levels of support and resistance.

Spiegel thinks we may have a short-term rally in the coming weeks. I do, too. In fact, I’d argue that a rally from here isn’t just possible, but probable, given how stocks have behaved this year.

I also think that’s going to happen even if the rally fails by month’s end and the SPY breaches support once more, which Wall Street will take as a major buy signal simply because retail traders continue to fall into the same trap.