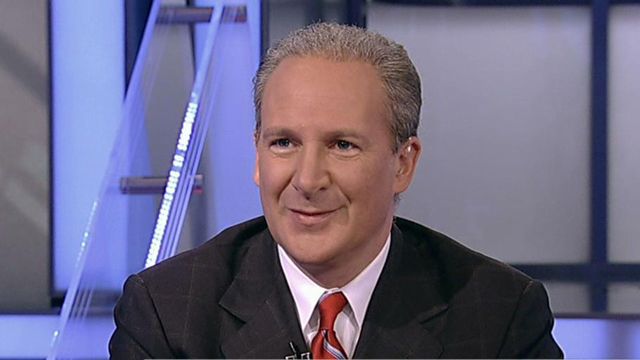 Abandon all hope ye who invest in equities, because perennial doomsayer Peter Schiff is predicting another recession.

A real nasty one at that.

“This is going to be the inflationary recession,” said Schiff on Fox Business.

“There’s no way out and it’s a political disaster for Trump because the recession is going to start before he finishes this term, which means he won’t have a second term.”

He went on, adding that “the dollar is going to go through the floor and it’s going to take the bond market with it and the next crisis, it’s not subprime mortgages, it’s going to be in the Treasury market.”

“The only question is when do we surrender and how do we admit defeat. Again, I don’t think we’re going to get any kind of deal.”

Instead, he advises investors to stick with gold – an asset that will explode in value according to his research.

“Everybody is weakening their currency to create more inflation,” Schiff said.

“Well, what’s going to happen? The world is going to drown in an ocean of inflation and gold is going ballistic.”

Schiff, whose claim to fame was predicting the 2008 meltdown, is also known to be one of the world’s biggest goldbugs. It doesn’t matter what’s going on with the market, his stance has been roughly the same over the last decade:

Buy gold, because inflation is going to decimate the dollar.

In fact, he predicted in 2010 that quantitative easing would lead to hyperinflation. Moreover, that the dollar would get crunched and the U.S. would fall into recession just two years after the financial crisis.

Thankfully, that never happened. Instead, Schiff’s prediction was labeled as one of the five “worst economic predictions in history” by the Foundation for Economic Education – a list that includes Alan Greenspan’s prediction (from 2007) of double digit interest rates by 2008.

And over the years, he’s released several more “doomsday scenarios”, all having to do with the rapid devaluation of the dollar.

There are different causes each time, of course, but the theme is consistent. This time he says that Treasury bonds will start the currency collapse – similar to what Greece endured in 2009.

But based on what we’re seeing these days, Schiff’s prediction seems like a bit of as stretch.

Because the U.S. has two powerful tools to prevent a debt crisis from occurring:

Like it or not, the U.S. dollar is a “world currency”, and remains relatively stable despite the mass printing of new bills.

As long as the dollar remains stable, a debt crisis won’t happen. Schiff says that rampant inflation will devalue the dollar as a result of central banks creating inflation on purpose.

And while it’s true that countries are lowering interest rates, the fact is that we’re actually closer to deflation (which is bad for different reasons) than anything else.

High inflation is the eternal boogeyman, summoned by gold bugs whenever they need evidence of why investors should buy gold.

Yes, gold is doing well as of late, but not because of inflation or weakened currencies. Instead, uncertainty as a result of the trade war has driven the gold market in 2019.

So, while Schiff’s correct in assuming that high inflation would cause a gold boom, he’s exaggerating the risk of an American currency collapse. We’re nowhere near that point, even with Trump demanding a weaker dollar to help the U.S.’s position as an exporter.

Despite the market’s recent correction, the U.S. economy is still strong. New reports released over the last few weeks confirm that it is, leaving plenty of analysts wondering:

“If the economy is showing signs of strength, why are investors selling?”

Mad Money’s Jim Cramer says it’s the market’s best kept secret, as headlines out of China and Europe have investors convinced that we’re in for some major trouble.

In reality, America continues to chug along, meeting or beating GDP growth estimates with regularity.

Which is seriously impressive considering how strong economic growth has been since 2016.

With the U.S. economy looking good, it’s unlikely that the dollar would collapse.

And if the dollar doesn’t collapse, then Treasury bonds won’t either.

If Treasurys survive, then a U.S. debt crisis won’t happen.

Meaning that the end of the world, no matter how many times Schiff predicts it, won’t arrive as scheduled.

Because as long as the American economy retains its strength and inflation stays low, investors will continue to generate interest off equities.

Even in the middle of a trade war with China.

Eventually, Schiff may be right – if banks keep lowering rates forever, we will eventually hit a point of no return. But who knows when that will arrive? Schiff’s advice, at the moment, it completely worthless.

Are you willing to miss out on a decade of gains in fear of the next big crash? The markets of the world have a nasty habit of not collapsing when financial soothsayers think they will.

More than anything, this looks like another “near miss” waiting to happen. And until we see real signs of an economic slowdown, it might make sense to take the opinions of goldbugs with a grain of salt.

After all, if you would’ve ducked out of the market in 2010 like Schiff advised, you also would’ve missed out on the 130% run (as reflected in the S&P 500) that’s occurred since then.

All while gold lingered – rising only 6.3% over the same time period.