Stocks climbed modestly this morning as investors awaited the release of the latest Fed meeting minutes. The Dow, S&P, and Nasdaq Composite all advanced, with tech once again leading the market.

The largest bullish influence this morning, however, came from last week’s jobless claims data, which saw first-time filings top 240,000 (vs. 225,000 expected). If the Fed’s going to pivot, US labor needs to weaken.

“In the market’s interpretation, this is positive given that the Fed wants to see a rebalancing in the labor market whereby businesses begin to hold leverage over the demand for higher wages,” explained LBL Financial strategist Quincy Krosby.

“Higher wages have been consistently passed along as higher prices leading to rising inflationary pressures.”

Investors are hoping to learn more about the Fed’s stance on rates in its FOMC meeting minutes release this afternoon. Most analysts anticipate a dovish tone from Fed officials.

“We’re going to see the debate and the discussions around the two-step process, in other words, the importance of slowing the pace of rate hikes, but also not appearing to have declared victory on inflation,” said David Donabedian, chief investment officer at CIBC Private Wealth US.

Fed officials will almost certainly reiterate that they’re taking a “data-based approach” – something Fed Chairman Powell has stated ad nauseam for well over a year.

Any comments that smell hawkish at all could be met with equity selling, as nearly the entire market expects dovish minutes.

What comes next – the November jobs report, due out December 2nd – is far more important as a result. It could either power a major “Santa Rally” or doom stocks to a retracement, depending on how it goes. The market is ready to burst on the next major data release. It just so happens to be the November jobs data.

“I think the market is going to continue to […] climb higher. I do really think that there’s a good shot that [the S&P is] going to be well above 4,000 at year-end.”

The S&P was trading at 4,020 through noon today. Its next major test is the 200-day moving average, which the index was halted at back in August. 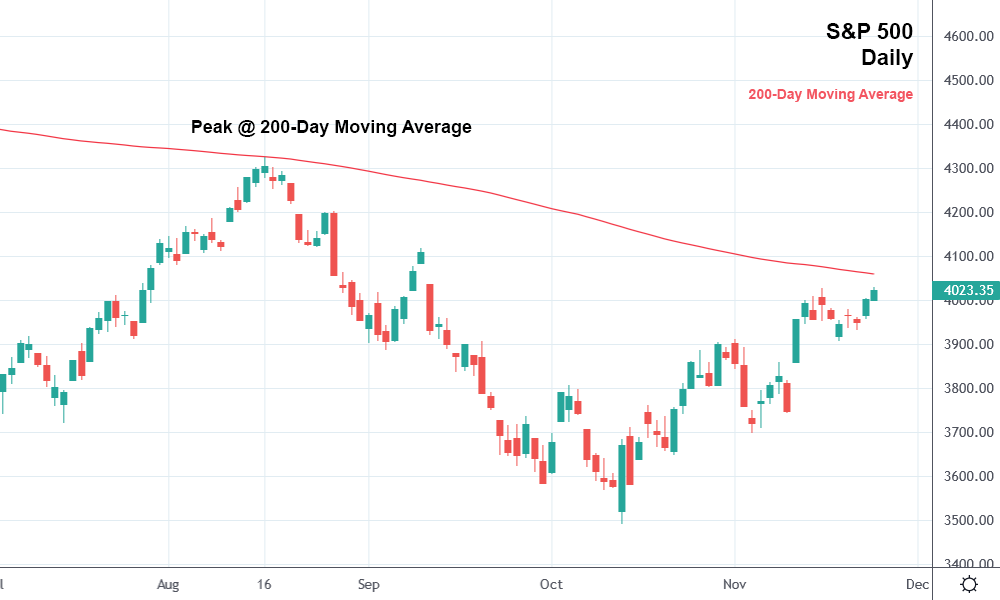 That seems like a good spot for dip-buyers to take profits. The index tagged the 200-SMA in August right before plummeting. There were fundamental reasons for that, of course, like hot inflation data and a hawkish Fed meeting.

But those events came after the S&P touched the 200-SMA. If the index rebounds off it again, be wary of a major retracement in response to bearish data. The November jobs report should be a “bloodbath” by all accounts, considering the numerous corporate layoffs of the last few weeks.

If it isn’t, though? Look out below. And the beginning of that retracement could easily be marked by the 200-SMA once again, just like the market’s big selloff that started in mid-August.