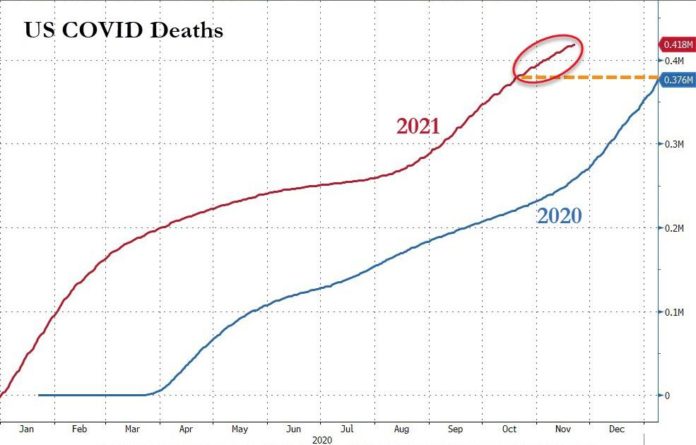 Stocks ripped higher this morning as investors digested the latest Covid variant news. Omicron, the new variant out of South Africa, is reportedly more infectious yet less deadly than prior strains. The market plunged on Friday in response to headlines that Omicron had made its way into other countries.

At the time, little was known about how severe Omicron’s symptoms were. It wasn’t until later that doctors learned how well Omicron-infected patients handled the virus.

“The cases that have occurred so far have all been mild cases, mild-to-moderate cases, and that’s a good sign,” said Barry Schoub, chairman of the Ministerial Advisory Committee on Vaccines.

There was a noticeable lack of hospitalizations stemming from Omicron, which Schoub explained may have been caused by how heavily mutated the strain is. The increased mutation level and rate of infection could also lead to Omicron replacing the more deadly Delta variant.

Schoub said that would be undesirable, however, because “we know [Delta] responds very well to the vaccine.” But is that true? Total Covid deaths in the US are already higher in 2021 than in 2020, even with Covid vaccines, and even with a month to go before the year ends.

Many highly-vaccinated countries recently experienced peak case totals and hospitalizations as well, the vast majority of which were caused by Delta.

In the end, Omicron may prove to be a net positive for the world should it bring Covid down to more of a seasonal cold than the Alpha or Delta strains. Yes, more will be infected, but symptoms will become much more manageable in the process, resulting in less suffering.

Angelique Coetzee, chair of the South African Medical Association, was the first doctor to spot Omicron. She confirmed Sunday that cases have been less severe than prior variants.

“There are no prominent symptoms. Of those infected, some are currently being treated at home,” Coetzee said in a BBC interview.

“What we are seeing clinically in South Africa and remember, I’m at the epicenter, that’s where I’m practicing, is extremely mild.”

Most importantly, Coetzee added that “we haven’t admitted anyone” to the hospital and that she “spoke to other colleagues of mine” who reported the “same picture.”

Coetzee concluded her interview by saying that the panic from authorities in regard to Omicron was “definitely” unnecessary.

Wall Street jumped on that theme over the weekend and attempted to calm investors. And sure enough, stocks rebounded this morning.

“There are still more questions than answers regarding the Omicron variant, but after what happened on Friday, the bounce today is a welcome sign,” said LPL Financial’s Ryan Detrick.

“We’ve seen other variants cause some indigestion, but after a little bit of time things were able to calm down and move forward. We’re optimistic that will be the playbook once again.”

So, like in the past, the “playbook” is to keep buying every dip in sight. It’s worked out very well virtually every time this year.

And it will continue to be effective so long as rates aren’t raised. Yes, stocks were likely to fall short-term independent of any new Covid scares. Thanks to Omicron, though, the market’s “bearish venom” may have been drawn out of equities all in one shot, and during a shortened holiday trading session to boot.

For bulls, that’s probably good news and it suggests stocks won’t fall much further, if at all. Unless, of course, Omicron turns out to be worse than expected.

In which case, look out below.