Stocks traded flat this morning in anticipation of the July FOMC meeting, set to conclude this afternoon. Fed Chairman Jerome Powell is expected to remain dovish in his post-meeting remarks.

And, with the market near its all-time high, plenty could go wrong if he doesn’t deliver. Market breadth – the number of stocks above the 50-day moving average – is extremely low. This means only a small number of the market’s top stocks control the major indexes. If Powell leans even slightly hawkish, the top names could drop, leading the general market lower.

As has been the case for a while, now, derivatives are driving the underlying. What’s more, the ramped-up options trading activity has mostly been focused on the market’s top 5 stocks:

Notice a trend? Where Big Tech goes, so too does the general market. And because so much trading activity is concentrated within these 5 stocks, the market has become far more susceptible to big moves.

That includes vicious, rapid dips. Just like the ones we’ve seen this year, all of which were filled by dip buyers just as quickly as stocks plunged.

Bears were almost treated to another quick sell-off yesterday following the CDC’s indoor mask revision. The market dropped with haste at the open before eventually recovering for a far more modest loss by the close.

But will investors witness a major dip this afternoon if Powell disappoints? Any losses driven by a hawkish Fed would likely stick around through today’s close, unlike yesterday’s temporary “mask crash” that peaked around noon.

That doesn’t mean, however, stocks will necessarily stay down or even finish out the week lower. The reason being that the S&P 500 has continued to rebound off the 50-day moving average (50-SMA) without fail. 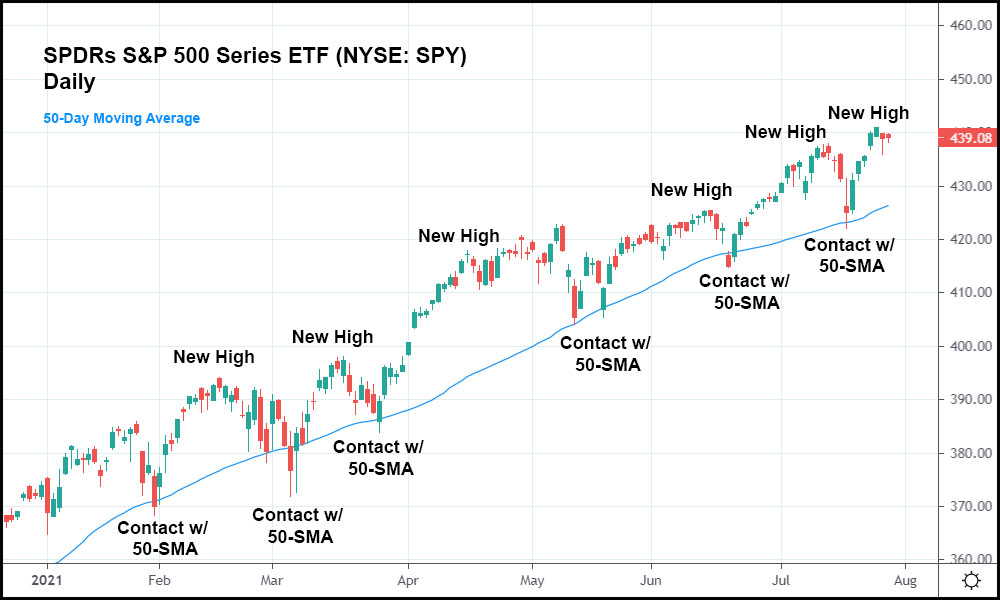 On Monday, July 19th, we said that it might be a good idea to buy the dip for this very reason. In the chart above, that was the most recent SPY contact with the 50-SMA.

And, sure enough, the SPY jumped upward to a new high by week’s end – another prediction of ours that came true.

So, if stocks end up falling to the 50-SMA in response to Powell’s post-meeting remarks, don’t sweat it. Panic-selling at the open was a bad move each and every time the market endured a significant drop.

Doubling down and buying more was the far superior choice by comparison. Eventually, this strategy will fail.

The market will, at some point, endure a more serious correction. Maybe that happens one week from now. Maybe a huge sell-off is coming in one month or even a year. Sadly, it’s very hard to predict when equities are going to reverse in a major way.

For that reason, scooping up stocks on the cheap remains a great strategy.

Even with the market trading at dizzying new heights from week to week.