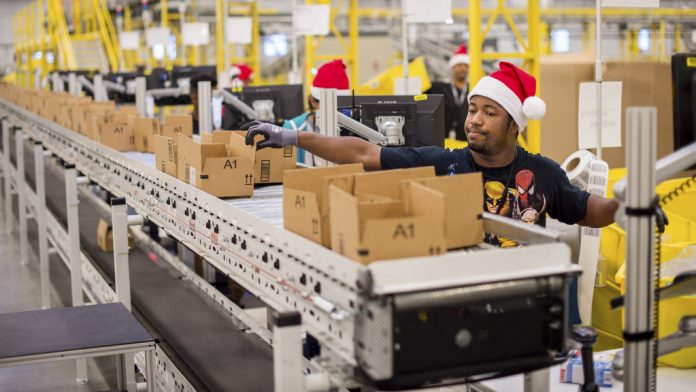 Amazon workers employed at the new Staten Island fulfillment center in New York have announced their intention to unionize, citing concerns they’re being treated like robots. These comments have left Jeff Bezos scratching his head thinking: “of course we’re treating you like robots, how else could you train your replacements?”

While New York state has a long and storied history of unions and strikes, the reality is unions peaked in the 1950s, and have been unable to recover their former glory days.  Despite worker’s grievances over alleged poor work conditions, they have less leverage against Jeff Bezos than they think, and investors should have that in the backs of their minds should the worst-case scenario—a worker’s strike—hit the NY-based fulfillment center.

Amazon Under Fire for Worker Treatment and “Union Busting” Activities

Let’s start with some context.

Earlier this week, Bloomberg reported that a committee of employees had formed to represent Amazon’s newest fulfillment center on Staten Island, NY. These employees have made clear their intentions to unionize, and they hope to gain concessions out of Amazon related to “safety concerns, inadequate pay, and 12-hour shifts with insufficient breaks and unreasonable hourly quotas.”

Democrat politicians are also getting excited about a dustup with Amazon, especially after an Amazon training video was leaked describing “union busting” activities, such as having managers report signs of “unusual interest in policies, benefits, employee lists, or other company information [by workers].”

Senators Elizabeth Warren of Massachusetts and Bernie Sanders of Vermont ramped up their worker’s crusade rhetoric after the video went live, despite Amazon just having raised their minimum hourly rate to $15 an hour.

“Workers’ rights do not stop at the minimum wage, and raising the pay of your lowest-paid workers, while important, does not give you a free pass to engage in potentially illegal anti-union behavior,” they said in an open letter to Jeff Bezos.

You’ll Pay for Those Sweetheart Deal Tax Breaks in Deep Blue States One Way or Another, Jeff

Jeff Bezos has a keen sense of value. He knew he could extract whatever tax breaks he wanted out of a state for the “privilege” of opening Amazon campuses and fulfillment centers which collectively employ tens of thousands of workers.

But Bezos will end up paying dearly for those tax breaks in the future, and not just once the tax breaks themselves wear off. Bad press and poor customer service due to strikes and walk-outs could bring up more near-term issues that affect Amazon’s bottom line.

Stuart Appelbaum, who presides over the Retail, Wholesale, and Department Store Union (RWDSU) is assisting Amazon workers with their objectives, and he believes Amazon workers have the power to make Bezos’ life miserable enough to force new concessions.

“There’s never been greater leverage — if taxpayers are giving Amazon $3 billion, then taxpayers have the right to demand that Amazon stop being a union-busting company… It’s incumbent upon the governor and the mayor to make sure that nothing happens to these workers who are standing up for their rights. If Amazon continues its union-busting activities in New York, they should call off the deal.”

Three Reasons Why Jeff Bezos Holds All the Cards

Stuart Appelbaum believes he has significant leverage over Amazon and Jeff Bezos. Unfortunately for him and his workers, this is simply not true. Amazon will certainly pay for those tax breaks over time, both in bad press, delays, and eventually, real money once the state begins to collect in full.

But for the short term, it’s Bezos who holds all the cards, and here’s why:

Amazon has an unlimited supply of workers that want to get paid $15 per hour. While it seems like a good move for the workers, Amazon is more likely to fire everyone and shut down the warehouse for a short period, before simply hiring new folks and returning to business as usual.

Unionizing works when labor can’t be easily replaced, but that is NOT the case with Amazon warehouse jobs. Instead, these workers may have just doomed themselves to unemployment.

Amazon is going punch for punch in the PR war. Amazon’s recent wage hike to a $15/h minimum combined with a string of high-profile changes such as restricting employees’ hours to 60 per week max and offering overtime rates as high as $26.25 to $34.50 has left many workers feeling like they’re being listened to, no matter what Sens. Elizabeth Warren and Bernie Sanders have to say about it.

We’re talking about one Amazon warehouse. Big picture for Amazon, this is unlikely to have an impact as it’s just one warehouse. A companywide walkout would have far-reaching implications for the company and its investors. But that kind of dissatisfaction has yet to materialize.

And that’s good news for Bezos (and his investors), since it’s only a matter of time before he really can replace these workers with machines, who (we’re almost certain) won’t go on strike and demand higher wages – at least until the robot uprising.