Is this the growth-to-value rotation that Wall Street’s been waiting for?

It certainly could be. After months of big-time tech (and growth) gains, commodity-linked stocks are surging to the forefront. Value stocks have officially broken away from growth as a result, in what could be a longer-term trend. 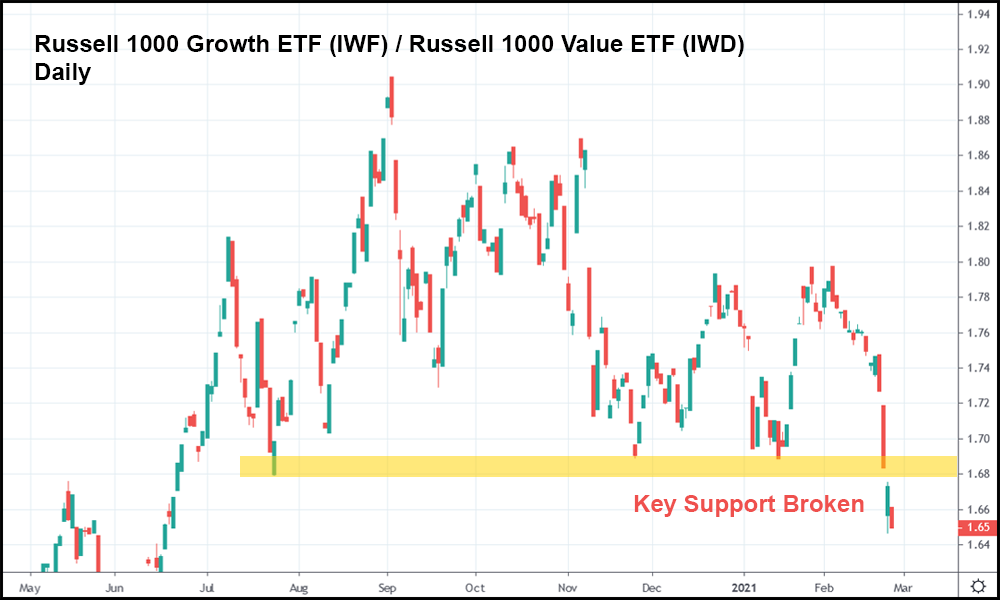 But instead of falling below support, the ratio rocketed higher to 1.79. Yesterday, it finally closed below 1.69, and today, it’s fallen further.

The downward breakout here is likely signaling a changing of the guard. When the IWF/IWD ratio falls, that means value stocks are overachieving their growth counterparts. When the ratio breaks support, it often foretells a major shift to value.

And since December, nearly every Wall Street bank has predicted a value comeback. They had good reason to, with the IWF/IWD ratio lingering near key support.

Now that IWF/IWD has finally plunged beneath support, this trend could start picking up steam. Significant momentum from commodity trading advisors (CTAs) going long on commodity futures will push matters more towards value. So too will traders attempting to capture some of the hype.

In fact, much of today’s big value gain came from soaring oil prices, which could make another huge leap in the coming months according to commodity experts – something Bloomberg reported on early this morning.

“Azerbaijan’s Socar Trading SA predicts global benchmark Brent could hit triple digits in the next 18 to 24 months, and Bank of America sees potential spikes above $100 over the next few years on improving fundamentals and global stimulus,” the Bloomberg article read.

“Speculators are also getting in on the action, increasing bets in the options market that oil will reach the vaunted level by December 2022.”

WTI Crude oil currently costs a little more than $63.00 per barrel. If the analysts are right, that could have a profound impact on the U.S. economy via a rise in inflation. Oil prices and inflation levels are typically viewed as connected by economists.

As oil goes up, so too does inflation. The relationship has loosened since the 1970s when oil prices spiked, but it still exists to some degree. The Federal Reserve Bank of St. Louis says that between 1970 and 2017, the correlation between oil and the Producer Price Index (PPI) was 0.71.

It’s somewhat troubling since other inflationary pressures – aggressive fiscal policy and massive liquidity provisions – remain on the table as well.

And it’s not necessarily a bullish sign when investors start to hoard commodities. Is there a more pessimistic market than one where traders swap cash for equity in physical goods?

This may sound like an extreme comparison, but the farther the IWD/IWF ratio falls, the more Mad Max-like the world becomes. Fiat currencies have no value in the famous series of post-apocalyptic movies.

Instead, gasoline and water rule the barren, Australian landscape.

We’re not there yet thankfully.

Nor will we (hopefully) ever reach such a depraved state. But Wall Street’s throwing their collective weight behind commodities, now, and oil in particular. Water futures also just became available for trading last December.

That ultimately puts yet another bearish “arrow” in the “crash quiver.” And with the market growing increasingly volatile, another growth-stock plunge seems inevitable.

All while commodities, and commodity-linked firms, look to beat out the rest of the field.