And today, the market’s shrieking in horror as the 10 Year Treasury yield idles around 1.35%. The Dow, S&P, and Nasdaq Composite initially cratered this morning before making back much of their early losses.

Analysts up and down Wall Street have said that a 10Y yield north of 1.40% would cause the ongoing “Covid rally” to stall.

A 10Y yield of 1.50%? Well, that’d be grounds for an 8% correction according to one rates expert, driven by commodity trading advisors (CTAs) going short on Treasury futures, thus spiking yields.

But relatively speaking, the current 10Y yield isn’t all that high. In fact, it’s well below where it was pre-Covid-19. U.S. monetary policy remains historically dovish and a mega-stimulus package lurks around the corner.

It’s something that Deutsche Bank analyst Jim Reid reminded clients of in a note, released this morning:

“I did a [chart of the day] showing real yields back over 200 years and highlighted that the only time real yields are negative for any period of time are around episodes of high debt,” Reid said.

“Given today’s debt levels, it’s likely real yields will stay ultra low for as far as the eye can see even if we’re seeing some cyclical pressure now.” 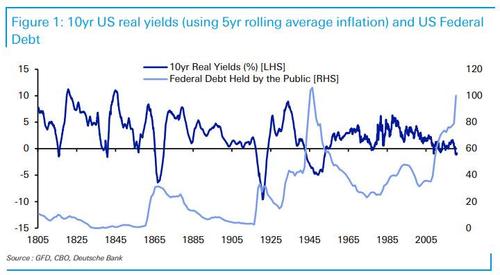 “So with debt so high and likely to go notably higher, it is likely that real yields will have to stay artificially low for a very long period of time. Any return to something close to long-term averages would have grave consequences for debt sustainability. The Fed would likely step in well before this point. Financial repression and [quantitative easing] (QE) will likely be alive and well for the rest of most of our careers.”

QE, which began in the U.S. following the 2008 Financial Crisis, has thrown the global financial system out of whack. We’ve observed in the past that there may be no comfortable exit from QE, either. Fed Chairman Jerome Powell attempted to do so in late 2018 and the market couldn’t stomach quantitative tightening (QT) via the raising of rates.

It was a noble endeavor, but one that ultimately fizzled into another round of “can-kicking” from central banks. Now, following an unexpected pandemic, that “can” of debt has become enormous.

In fact, current projections have global debt rising to $360 trillion by 2030, marking an $85 trillion increase from today’s debt level. If the world remains on that course, the Fed will never be able to allow rates to rise. And it’s not just stocks and bonds that would crash. National economies would crumble, too.

So, while a surge in yields may be causing some short-term turbulence, rest assured that central banks won’t let rates enter a longer-term uptrend. Could the 10Y yield hit 1.50%? Absolutely. And stocks would probably sink further in response.