Another day, another trading session marked by indecision. Neither bulls nor bears were able to take control of the market this morning following yesterday’s worse-than-expected inflation print. The May Consumer Price Index (CPI) beat analyst estimates, revealing that prices are still rising in a historic fashion.

It’s assumed that yields will eventually close the gap. That has yet to happen, though, with a tight-lipped Fed silent about last month’s inflation data. As a result, sentiment remains little changed.

What has certainly shifted, however, is consumer confidence according to the Conference Board’s buying intention index, which measures consumer buying plans 6 months from now. All three major spending categories – homes, automobiles, and appliances – cratered.

In fact, it was the biggest monthly drop ever measured for appliances and homes in terms of 6-month buying intentions. Now, consumer spending plans have almost returned to their March 2020 lows when the Covid lockdowns began.

The Conference Board’s latest findings jive with what we observed in homebuilder and homebuyer sentiment last month. Back then, builder sentiment soared while buyer sentiment hit a record low.

The most recent data set shows that the situation has only worsened. 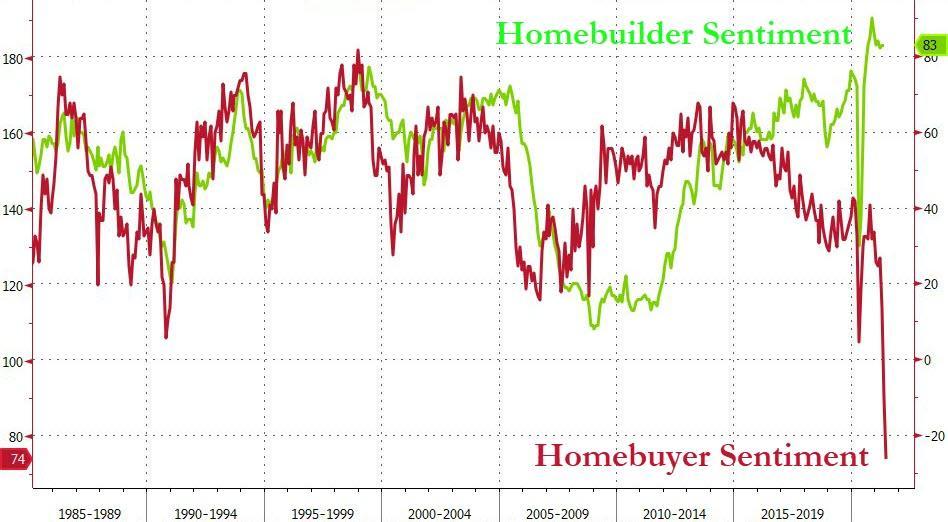 Thankfully for bulls, the University of Michigan’s June Sentiment Survey – released this morning – showed that inflation expectations have waned slightly over the long term.

But that’s where the good news ends.

U of M chief economist Richard Curtin noted that consumers have soured on prices for homes, vehicles, and household durables in a way that’s beginning to mimic November 1974, when price pessimism reached an all-time high.

“These unfavorable perceptions of market prices reduced overall buying attitudes for vehicles and homes to their lowest point since 1982. These declines were especially sharp among those with incomes in the top third, who account for more than half of the dollar volume of retail sales,” Curtin added. 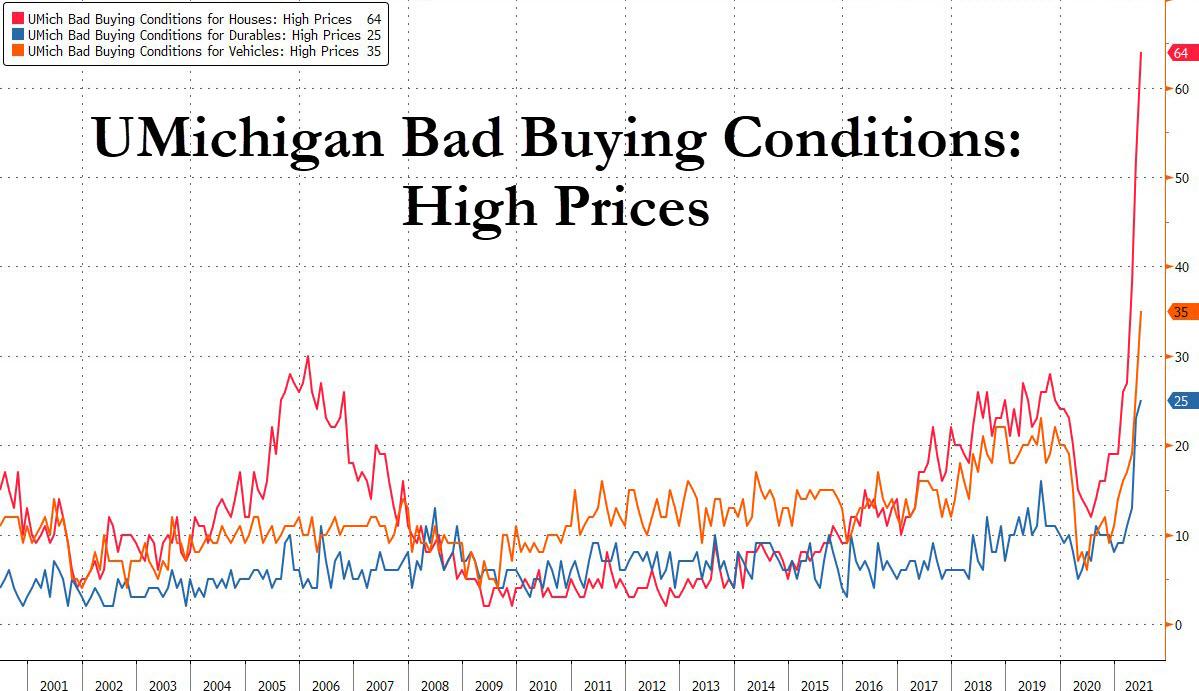 Does anyone else smell stagflation? Worse yet, Curtin believes that these higher prices might be here to stay.

“In the emergence from the pandemic, consumers are temporarily less sensitive to prices due to pent-up demand and record savings as well as improved job and income prospects. The acceptance of price increases as due to the pandemic, makes inflationary psychology more likely to gain a foothold if the exit is lengthy,” he said, before going on to explain that prices could be stuck at high levels as government stimulus slows.

“While expansive monetary and fiscal policies are still warranted, the accompanying rise in inflation will cause uneven distributional impacts. Those impacts have already been noticed in June among the elderly and lower-income households. A shift in the Fed’s policy language could douse any incipient inflationary psychology, it would be no surprise to consumers, as two-thirds already expect higher interest rates in the year ahead.”

In other words, demand should wane while prices remain prohibitively high for many consumers. And don’t count on wage hikes to make up the difference, either. Government unemployment insurance is being whittled down in many states already.

Once it’s further reduced, companies won’t have to compete with Uncle Sam. Wages are likely to shrink in response, compounding the problem.

It’s often said that the stock market is a forward-looking mechanism. And if that’s true, it should be predicting an economic quagmire 6 months from now.

But it isn’t. Not yet, at least. Because the “hogs are still at the trough,” clamoring for more gains by way of an uber-dovish Federal Reserve.

They just need to make sure to step out of the way before it comes time for slaughter.