The Senate voted “yes” on the $1.9 trillion Covid relief bill yesterday. Tomorrow, the House plans on doing the same.

President Biden will then sign it shortly after it passes through Congress, right before several unemployment programs expire on Sunday.

In other words, the next stimulus package is virtually a done deal.

That has bulls celebrating as stocks rip higher. The tech-heavy Nasdaq Composite is outperforming both the Dow and S&P this morning. A “double whammy” of good news – falling yields and a stimulus package – is lifting growth stocks across the board.

“After lagging badly for the last few weeks, growth/momentum stocks are exploding higher as investors grow a bit more comfortable around rates and step in to buy this erstwhile most-loved sector,” explained Adam Crisafulli, founder of Vital Knowledge, in a note.

“A lot of these tech stocks have become oversold on a short-term basis. Therefore, it’s not a big surprise that they’re seeing a nice bounce,” Maley said.

“The question will be whether this bounce is a strong one […] or a ‘dead cat bounce’ that doesn’t last very long at all.”

And to at least one Wall Street bank, today’s tech resurgence could signal an end to the value stock rotation – something we’ve observed over the last few weeks as growth stocks got hammered by rising rates.

Well, not all value stocks, at least. Just commodities, according to a note released by JPMorgan analysts earlier this morning. 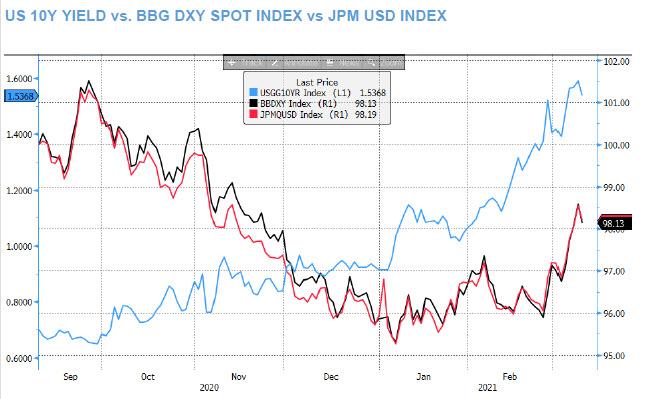 JPMorgan says that the U.S. Dollar (black line) and 10 year Treasury yield (blue line) have shifted from a negative correlation to a positive one since the start of this year. Looking at the chart, it’s hard to argue with that hypothesis.

And though yields fell today, the 10Y yield is still in a solid uptrend. That’s unlikely to change as yields continue to creep higher (slowly, hopefully) from here. The dollar should follow suit.

Conversely, homebuilders and precious metals stocks (including miners) are the most negatively correlated to the dollar.

But outside of yields, another bullish dollar pressure is forming. 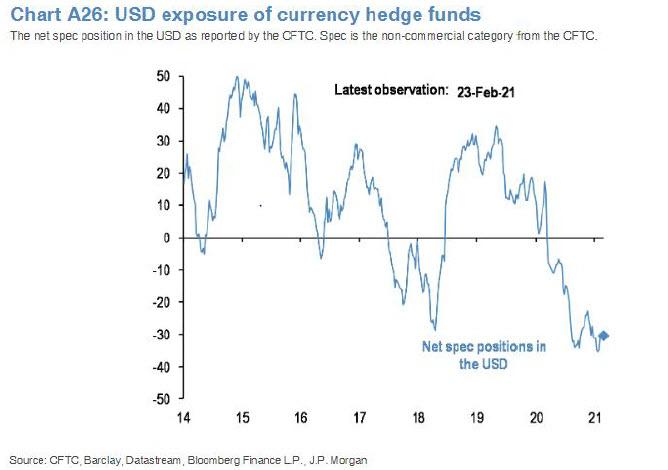 Obviously, this hasn’t worked out for hedge funds in 2021. The dollar’s been steadily rising since the first of the year.

But now that the dollar’s getting stronger, hedge funds could cycle out of their bearish positioning. That could send the dollar higher, potentially in rapid fashion, as “dollar shock” whacks the market’s more dollar-sensitive sectors.

Like precious metals, homebuilders, and other commodity-linked stocks, all of which stand to drop if the dollar continues surging.