Price gains were spread out across a broad range of categories as the PPI notched a new record YoY increase. Yesterday, stocks rose temporarily on the hope that inflation had finally peaked. Today’s PPI release, however, suggests the opposite may be true despite continued assurances from analysts to the contrary.

“I think the market appears to be reacting in a similar way that it did yesterday in response to the consumer price index, obviously PPI at 11 handle to me is mind-boggling, but I think the peak inflation narrative still holds,” said Cresset Wealth founding partner Jack Ablin.

In addition to the headline and core figures, the PPI also includes inflation data for intermediate demand goods, which are the goods sold to businesses as inputs for production. 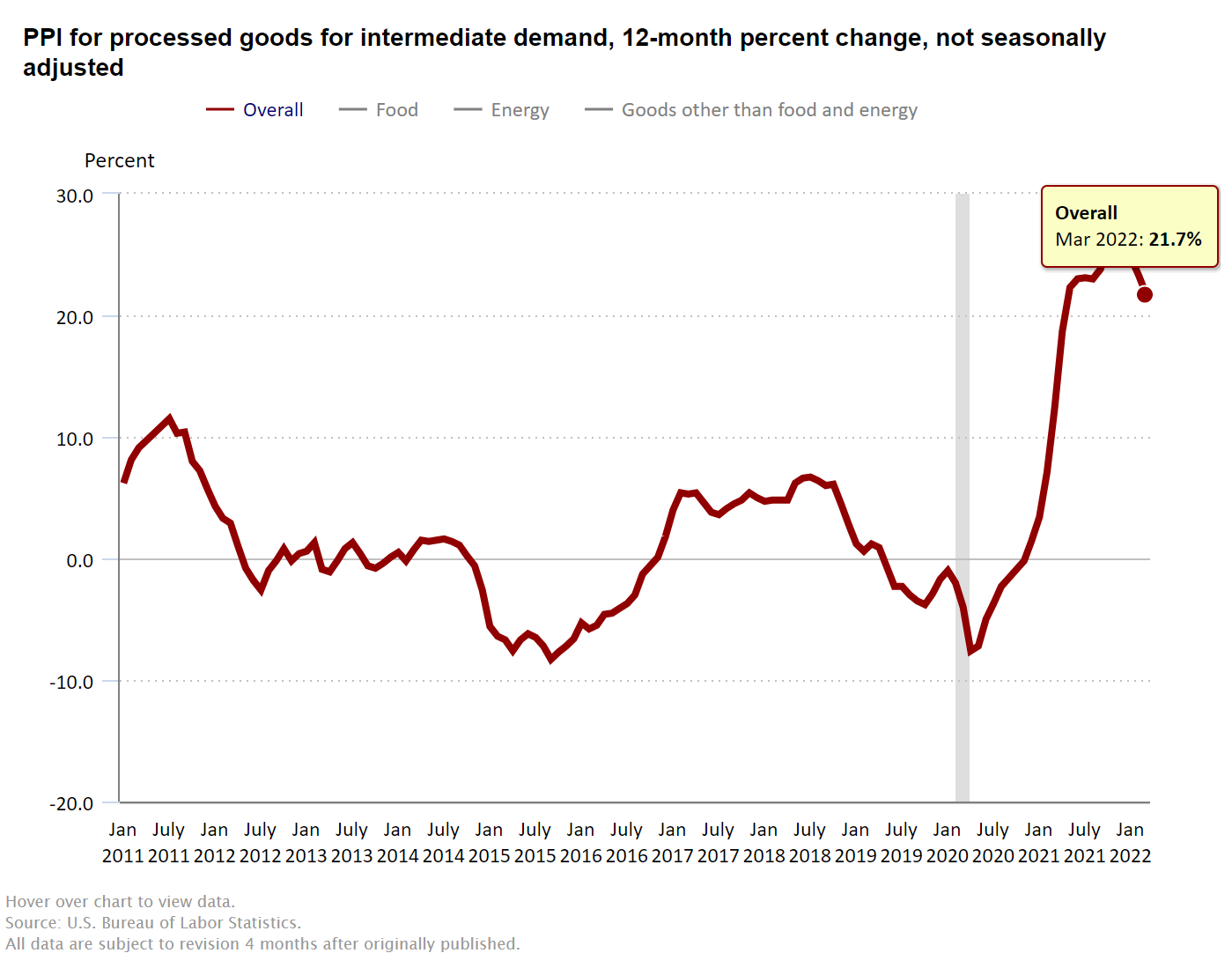 In other words, historical precedent suggests that consumer and producer inflation has yet to peak. Keep in mind also that, back in 2018, inflation continued to rise despite an attempt at quantitative tightening (QT) by the Fed. At the time, deflation was a bigger concern than inflation.

The difference now, though, is that inflation could certainly subside if the Fed intentionally crashes the US economy into a recession via monetary tightening. But, according to Deutsche Bank, that might not happen until 2023.

If Deutsche Bank’s analysts are right, that means the US will slowly erode into a state of stagflation – stagnant economic demand, high inflation – through the end of the year.

And the most recent PPI/CPI readings support that theory.

“The severe imbalance between robust demand and handicapped supply will persist throughout Q2, keeping producer price inflation sticky and elevated until price pressures start to decelerate in the latter part of 2022,” explained Mahir Rasheed, US Economist at Oxford Economics.

“With a new wave of lockdowns in China and the war in Ukraine raging on, however, risks to the inflation outlook remain firmly to the upside, reaffirming our view that the Fed must proceed with a faster pace of policy normalization in the months ahead.”

Yet bulls seemed mostly undeterred by this through noon as the intraday rally intensified.

Earnings season, which officially began this morning after JPMorgan (NYSE: JPM) disappointed shareholders, could easily pitch sentiment lower again, however, if investors don’t like what they hear. Banks are up first, and should other financial institutions follow JPM’s lead, it may only be a matter of time before the general market endures yet another bearish continuation.

Possibly all the way down to the market’s mid-March lows.