Stocks roared higher this afternoon after bulls finally halted the market’s week-long selloff. Thus far this year, dips have regularly occurred leading up to the monthly options expiration (OpEx) date, which arrives the third Friday of each month. US economic slowdown concerns caused stocks to drop last week, providing yet another mid-month dip in September.

Will a rally follow like in the months prior? It certainly seems that way following today’s impressive gain. Wall Street had plenty of concerns about a short-term plunge (upwards of 10%) this month – something analysts noted en masse last week.

Now, though, strategists are jumping back on the bullish bandwagon following the S&P’s recent (and much smaller than anticipated) 2.4% peak-to-trough correction.

“Despite concerns about the recent downshift in economic and business cycle momentum, we remain confident that strong growth lies ahead and activity is bound to re-accelerate,” explained JPMorgan’s Dubravko Lakos-Bujas in a morning note.

“We remain positive on the equity outlook, and expect S&P 500 to reach 4,700 by end of this year and surpass 5,000 next year on better than expected earnings.”

Lakos-Bujas made no mention of inflation following yesterday’s better-than-expected August Consumer Price Index (CPI) print. Wells Fargo Investment Institute strategist Sameer Samana believes it may have been “cold” enough to even delay a taper warning from the Fed.

“We probably won’t get the answer to whether [inflation is] transitory or not probably until 2022 – that’s when the base effects will start to wash out and all the distortions start to kind of resolve themselves,” Samana said.

“What the [August CPI] tells us is that the Fed probably has a little more wiggle room. If they don’t want to do something at the meeting next week, given the weaker-than-expected [August] payrolls number, the inflation number […] also takes the pressure off of them to do something next week.”

If the Fed goes the “no taper” route, stocks could easily rally through the end of September. The S&P hasn’t closed below the 50-day moving average – a longer-term trend identifying indicator – since late June of this year. At present, the index remains above it despite last week’s selling. 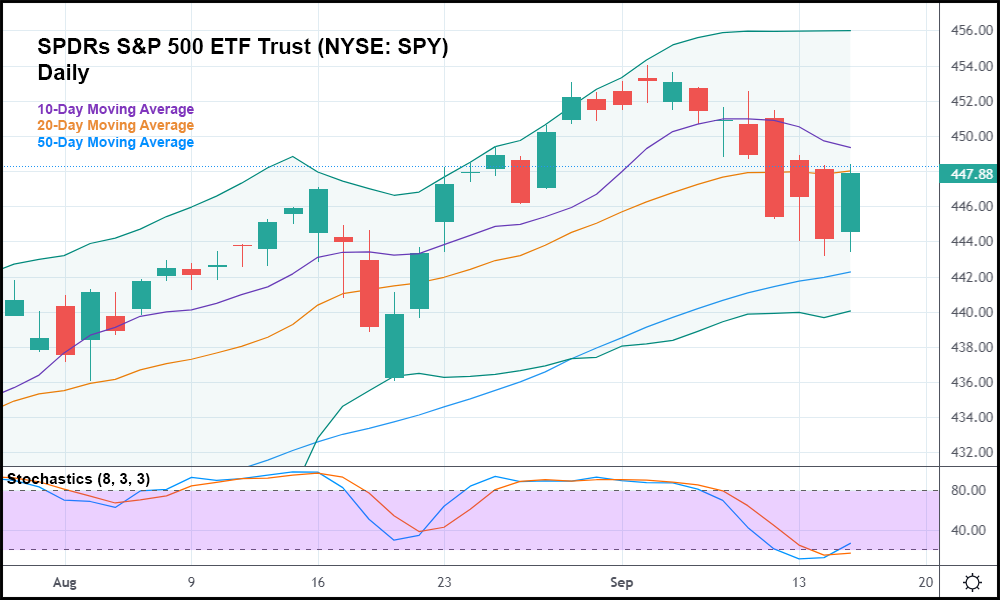 But Morgan Stanley chief investment officer Mike Wilson broke rank with the rest of Wall Street when he predicted that not only will stocks stay subdued in September, but that the S&P could breach the 50-day moving average as well.

“The midcycle transition always ends with a correction in the [S&P],” Wilson remarked.

“Maybe it’ll be this week, maybe a month from now. I don’t think we’ll get done with this year, however, with that 50-day moving average holding up throughout the year because that’s the pattern we typically see in this part of the recovery phase.”

What investors also don’t usually see is massive OpEx rallies (preceded by sharp selloffs) nearly every month. Wilson’s right in that the midcycle transitions of the past have typically followed a specific pattern.

But these days, all the conventional rules have gone out the window. Extreme bullish exuberance has pushed the market to dizzying heights. Derivates (options, futures) are driving equities (the underlying) more than ever before.

So, could stocks climb higher from here? Absolutely. And until a true bearish collapse occurs, buying the dip likely remains the best move.

No matter how many times cycle-driven analysts insist that’s no longer the case.