Stocks gained this morning following yesterday’s moderate losses as bulls looked to push the major indexes to new heights. The Dow, S&P, and Nasdaq Composite were all up on the day shortly before noon.

And it’s no wonder why – initial weekly jobless claims came in at 385,000, matching the consensus estimate. With the July jobs report due out tomorrow, investors are watching employment data closely for buy or sell signals. Today’s weekly jobless claim tally seems to have encouraged traders that more good news is around the corner.

“More competition for workers, particularly in the leisure and hospitality sector, will support acceleration in wage growth, boosting household incomes and consumer spending.”

Second-quarter corporate earnings largely impressed, too. E-commerce giant Amazon (NASDAQ: AMZN) may have “missed,” but across the board, most American companies enjoyed a fruitful Q2. Some analysts remain concerned about rising inflation, which drove up input costs for certain types of stocks (Dow industrials, in particular) and may have caused growth to peak alongside employment.

Clorox (NYSE: CLX), for example, saw its margins trimmed by 9.7% last quarter due to soaring manufacturing and logistics related expenses.

If this becomes a prevalent trend for other firms and industries, analysts may begin to shrink 2022 revenue estimates for the majority of corporations.

That’s a worst-case scenario, of course, but entirely possible if inflation is left unchecked. For now, though, bulls don’t seem overly worried.

Goldman Sachs just raised its year-end target for the S&P 500 to 4,700 due to a better-than-expected earnings season. That means the index will gain another 7% from its current price level if Goldman’s estimate comes to fruition. 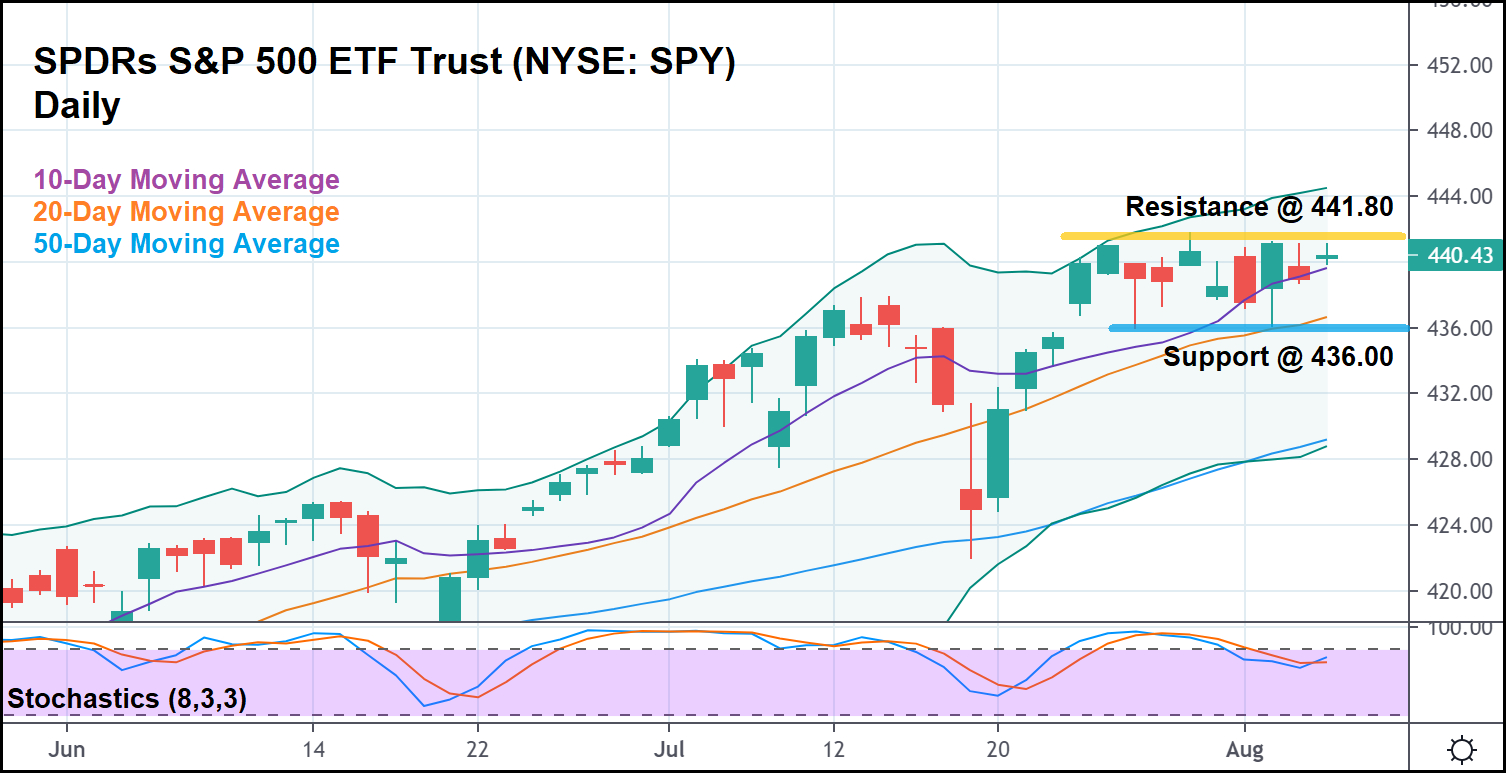 And as seen in the daily candlestick chart above, the S&P 500 (represented by the SPY) is within striking distance of another leg up. The broader market index is above all three critical moving averages – the 10, 20, and 50-day – and a level of key support (blue line) has been established at 4,360.

The stochastic indicator (a measure of market momentum) is below 80, which indicates that the S&P is not necessarily considered overbought in the short term.

When viewed from a longer-term lens, equities certainly seem overvalued. But the short-term evidence also suggests that not only is another rally possible, it may even be probable.

The S&P will need to surpass the previous all time high at 4,180 for stocks to break through to new ground. That might seem like a tall order given the advent of the Covid delta variant, but it’s not at all out of the question for bulls in today’s market.

Tomorrow’s jobs report could be the catalyst they need to launch stocks higher once more. And if the payrolls data reveals a major “miss,” that may not necessarily be the worst thing for investors, either.

The market has a knack for rebounding off the 50-day moving average with ease. A bad jobs report might simply provide a lucrative dip-buying opportunity.

Right before another “snap-back” recovery to the recent highs.