Treasury yields are up again today, exasperating investors to cap off a tumultuous week. It’s the second “gut punch” in less than 24 hours for tech bulls who were cruelly teased by the European Central Bank (ECB) yesterday morning.

The ECB hinted at authorizing an imminent bond-buying program, only to clarify later that it would be part of a longer-term, quarterly-based plan. Yields initially dipped on the news before regaining lost ground once the ECB released its guidance.

The rate resurgence made many Wall Street analysts look foolish in the process. Over the last week, scores of strategists explained to clients that rates were set to slow down. Some even said that they’d drop.

But the reality is that the bond carnage has persisted despite highly oversold Treasury prices. It’s a trend that’s unlikely to continue, of course.

Until it ends, though, growth stocks – and tech, in particular – might be stuck chopping sideways. 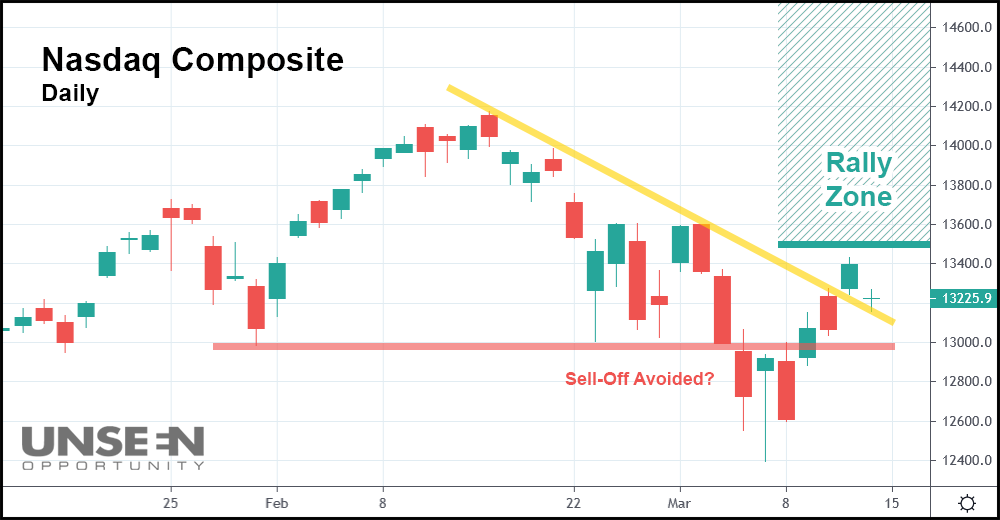 The Nasdaq Composite broke out of its minor bearish trend (yellow trendline) yesterday following the ECB’s announcement. By the close, the index managed to hold on to most of its gains. It was an auspicious sign, especially following a bearish breakout past support at roughly 13,000.

But if rates continue climbing at the current pace, the Nasdaq Composite could dip back beneath support.

It may also prompt action from the Federal Reserve, likely sooner than later as the FOMC is scheduled to meet next week.

“If the bond market selloff intensifies leading up to the March 17th FOMC decision, the Fed may finally have to push back against the move in Treasury yields,” said Edward Moya, senior market analyst at OANDA.

“The Fed has clearly stuck to the script that tighter financial conditions or disorderly markets would warrant action and if yields maintain a skyrocketing trajectory, they will become more vocal.”

In a market that hasn’t been overly manipulated, yield curve control would raise significant red flags. But these days, low-rate-addicted bulls will only cheer on the Fed if it sparks an artificial bond recovery.

Wall Street insists that this kind of behavior is ultimately good for investors. Since the Financial Crisis, it certainly has been.

But the easing is eventually going to end. And in potentially disastrous fashion.

Thanks to Covid-19, the market’s been thrown so completely out of whack that the usual buy/sell signals simply don’t work anymore. It’s created an environment rife with volatility, and it should only get worse with time.

Yes, the U.S. is recovering from the pandemic. Spending is up and restrictions are down.

That does not mean, however, that what comes after the pandemic will be any better than what we have now. An absolute freight train of dovish monetary policy is about to collide with a red-hot, stimulus-driven U.S. economy.

Inflation’s likely to become a major problem as a result.

Usually, this is the kind of stuff that sends gold to the moon. But instead, it’s sinking. All precious metals are down, in fact. And it’s because the Consumer Price Index (CPI) increase in February wasn’t horrible.

But mark my words:

We’re not out of the woods with inflation just yet. It’s going to be a major problem as Q3 approaches, and one that the Fed will end up trying to solve.

Sadly, though, it should come at the expense of “buy-and-hold” bulls, many of whom will stubbornly refuse to sell.