Stocks endured deep losses at the open this morning before recovering slightly through noon. Overall, the market still seems shocked by yesterday’s afternoon plunge. On Wednesday, equities provided an eerily similar performance when the major indexes all opened higher before closing much, much lower.

This new pattern has bulls feeling wary about “buying the dip” for the first time in over a year. In fact, the S&P temporarily broke below its 200-day moving average (SMA) – a long-term trend identifying indicator – earlier this morning. If the index closes below the 200-SMA, it will be the first time it has done so in 409 trading days. That would measure the longest “win streak” above the 200-SMA for the S&P in over 8 years.

The last time the index closed below the 200-SMA was when Covid hit in late February 2020. Before that, the Fed’s rate hikes drove the S&P beneath it in late 2018.

And for the Nasdaq Composite, things are even worse. The tech-heavy index already closed below the 200-SMA last Tuesday and is having its worst January in more than 30 years.

Traders remained focused on the three major indexes – the S&P, Dow, and Nasdaq Composite – over the last few weeks, searching for signs of an upcoming rally or correction. These indexes were largely “rangebound” during that time, meaning that they were unable to make a concerted move either up or down.

And while all of this was going on, most investors missed what the market’s “other” major index was doing. 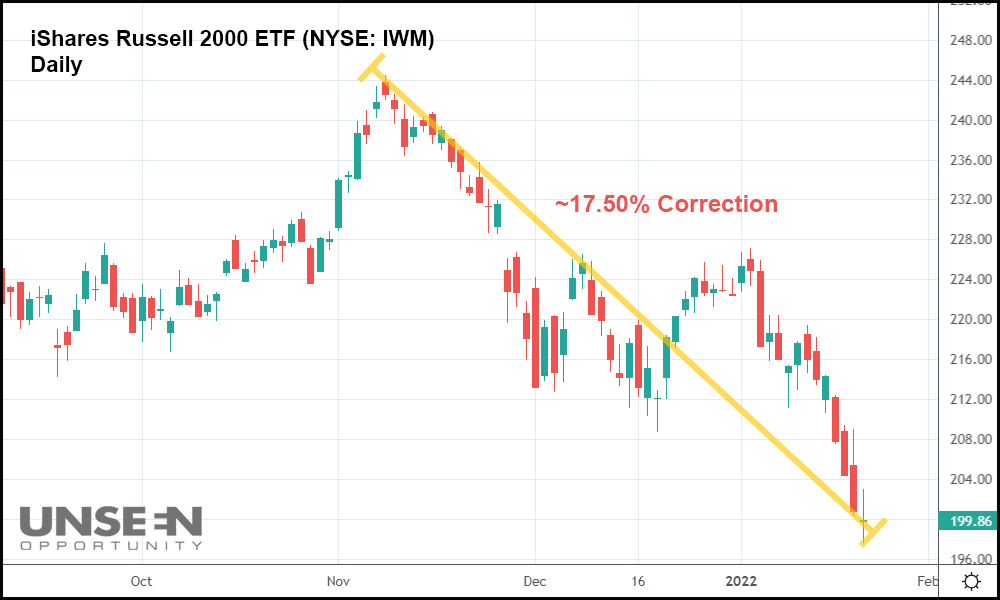 The Russell 2000 (as represented by the iShares Russell 200 ETF) is a small-cap index, but it is seen by many as a better indicator of the US economy’s health than the S&P. The reason being that roughly 40-50% of the S&P’s revenues come from foreign sources while only around 10% of the Russell 2000’s revenues are foreign by comparison. That means Russell 2000 stocks are highly dependent upon domestic revenues to prosper.

And when domestic revenues are down, the Russell 2000 suffers for it. The index has fallen roughly 17.5% from its recent peak, almost qualifying it for bear market status (which most would argue requires a 20% correction from the recent highs) vs. the S&P’s much smaller 7.5% correction from its all-time high.

Worse yet, the Russell 2000 was effectively flat through the majority of 2021 while the S&P notched new highs week after week.

Historically speaking, whenever the Russell 2000 enters a bear market, the major indexes tend to follow. And the Russell 2000 is dropping for a very good reason. Investors are starting to realize that a rate hike is actually on its way in March, and according to the most recent crop of inflation data (the December CPI and PPI), inflation looks anything but transitory.

Don’t tell fund managers that, though. In the Bank of America Global Fund Managers Survey (released Tuesday), investors learned that 56% of the world’s top fund managers still think that inflation is merely transitory. Only 36% believe that it’s permanent.

This disconnect from reality is the kind of thing that drove the market’s wild price action in January. Money managers these days don’t know how to handle a portfolio while the Fed is tightening. Most have simply never experienced it, and they aren’t positioned properly as a result. This caused the market to become more prone to major price swings.

That’s bad news for long-term, buy and hold investors, who have been forced to “white knuckle” their portfolios through January.

But for active, short-term traders? It’s been a bit of a gift, especially over the last week for any bears that took shorts on some of the market’s smaller-cap names. These are the same types of stocks included in the ailing Russell 2000, or as I like to call it, the “pulse index,” which traders should really be using to examine the state of the US economy far more than the foreign revenue-driven S&P.