The September options expiration (OpEx) date is here and, like always, it’s been an eventful affair. Stocks tumbled this morning in response to a massive unwinding of options positions. Over the last year, OpEx has provided major buying opportunities for traders. The market would typically start to dip on the Monday prior to OpEx.

This month, however, equities peaked almost two weeks ahead of schedule. That may have contributed to the worse-than-usual correction that has yet to level off.  It seemed the bottom was in yesterday as the major indexes rallied through the close.

But today, stocks opened for significant losses that only intensified as the trading session progressed.

What also jumped higher was volatility as Delta variant worries, economic concerns, and a lack of stimulus weighed heavily on bulls.

And the most recent consumer sentiment reading (released by the University of Michigan this morning) is unlikely to help matters in that regard. 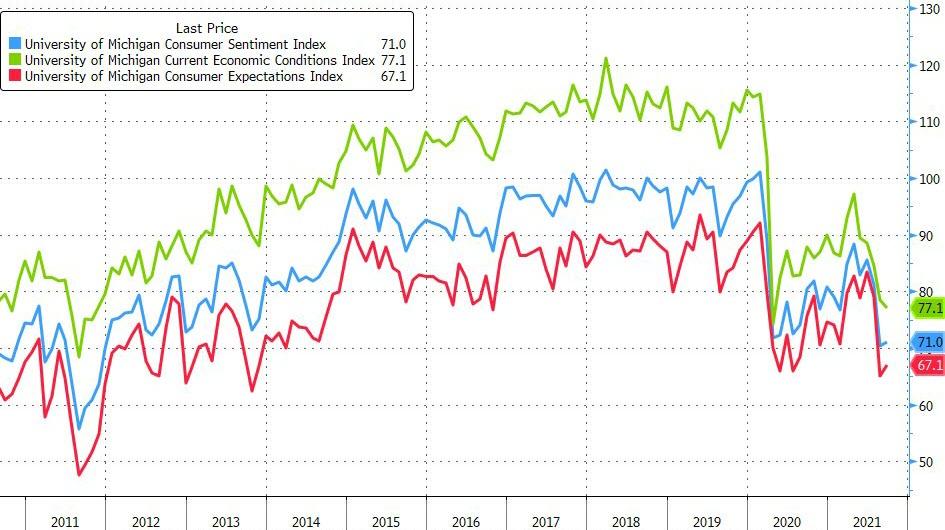 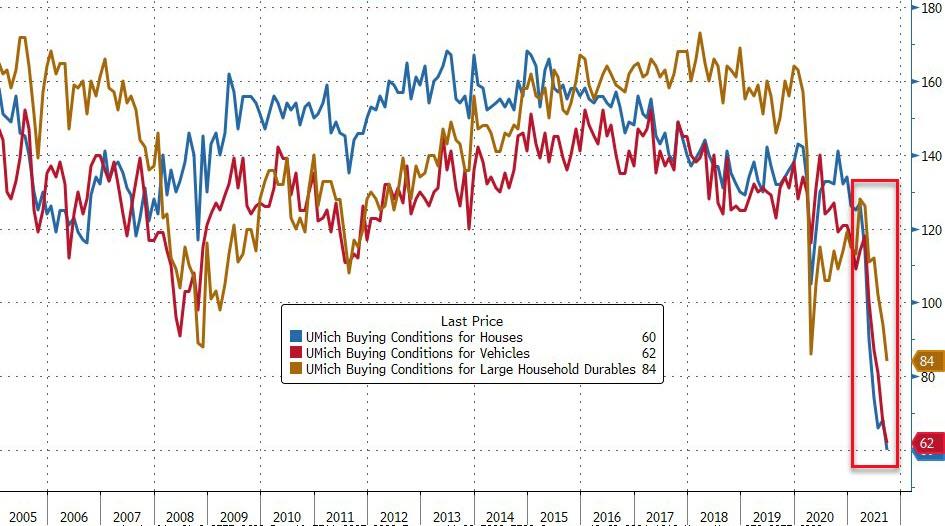 “Although declining living standards were still more frequently cited by older, poorer, and less educated households, over the past few months, complaints about rising prices have increased among younger, richer, and more educated households,” said Richard Curtin, director of the survey, as he explained why buying condition sentiment sunk to new all-time lows.

“Some observers anticipated that the early August plunge in confidence would quickly disappear since it was driven by emotions,” Curtin added.

“[But] a more accurate reading is that consumers correctly assessed the economic impact of the resurgent Delta variant.”

Relatively speaking, the Delta variant has not locked down local economies like the first wave of Covid did. Instead, a lack of government stimulus could be having a more profound effect on the US.

The FOMC is set to meet next week as well, and some analysts expect Fed Chairman Jerome Powell to announce a taper warning on September 22nd (next Friday) after the meeting concludes. Doing so might just make the US’s economic problems worse, however. For that reason, much of Wall Street believes the Fed’s taper timeline has been delayed. A taper announcement next Friday is now considered by analysts as an improbable outcome.

But even if the Fed doesn’t taper, quantitative tightening (QT) could arrive nonetheless. Legislators are expected to raise the debt ceiling (which hit its limit back on July 31st) in October. After that happens, the US Treasury is likely to issue hundreds of billions of dollars in new debt, sucking liquidity out of the economy in the process. Usually, this isn’t a problem as the Treasury issues the same amount of debt (which removes liquidity) as the cash it spends (which adds liquidity). More recently, however, the Treasury has been spending at unprecedented levels while scaling back its debt issuances as the debt ceiling grew nearer. This, in effect, acted as quantitative easing (QE).

When the debt ceiling is eventually lifted, a massive wave of debt issuances will be “uncorked” to cover for the Treasury’s low cash balance, scaling back the liquidity added and thus resulting in QT. Worst of all, the Fed has no say in whether this happens. Only Congress does.

And not raising the debt ceiling is basically out of the question.

So, no matter what the Fed decides next week, the US economy is headed for a date with QT. The market will eventually realize this, which should only make the recent volatility worse.

Does that mean stocks are going to crash any time soon? Probably not. Rather, a rally to new highs would match the market’s prevailing trend this year, which seems ready to continue.

Even with a debt ceiling vote threatening to reduce liquidity, and by proxy, share values sometime in the next few months.