Stocks traded flat today in response to a lukewarm jobs report. December payrolls were released this morning and investors learned that the US only added 199,000 new jobs last month, which fell well short of the 422,000 job estimate. And though payrolls disappointed, the unemployment rate fell to 3.9%, down from 4.2% while beating the 4.1% estimate with ease.

So, despite a poor headline jobs number, December’s report was a good one for workers. It showed that wages continued rising, and labor remained tight.

But for market bulls, it’s probably not a positive sign. We mentioned earlier in the week that the market is back in “good news is bad news” territory due to an impending hawkish shift from the Fed. Bloomberg chief economist Carl Riccadonna echoed our sentiment in an article this morning, citing the Fed’s “full employment” target of 4.0% unemployment.

“As we are already beyond that level (3.9% reported), this will compel any lingering fence sitters on the FOMC to the view that the threshold for interest rate liftoff has been met – thereby titling policy makers’ inclination toward March vs. June liftoff.”

“This is a green light for March,” Dutta wrote.

“The U3 unemployment rate plunged 0.3ppt [percentage points] to 3.9%, 0.4ppt below the Fed’s Q4 2021 estimate and only 0.4ppt above the Fed’s estimate for year end 2022. Average hourly earnings are coming in firm as the labor force participation rate remains flat.”

March is also when the Fed’s taper of asset purchases is expected to end, and according to the December FOMC minutes (released yesterday), the Fed may start to reduce its balance sheet at that time as well. It’s unlikely that bulls would be tortured by both a rate hike and a balance sheet reduction simultaneously, though, as picking one or the other would lead to a spike in yields, achieving the intended effect. Choosing to do both would be downright malicious.

Dutta also noted something else of importance: the fact that the labor force participation rate remained unchanged last month. 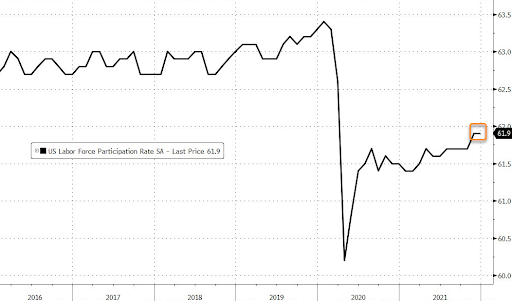 Like it or not, the US may never reach a pre-pandemic labor force participation rate again. Yes, Americans have increasingly come off the “government dole” since Covid hit.

But many ended up staying home, refusing to return to work. This has contributed to regularly higher than expected wage growth month after month. There are simply fewer workers available. Now, the US boasts a labor participation rate comparable to that of the late 1970s.

Does this seem like a trend that’s heading in the right direction? Labor force participation peaked back in the early 2000s and has been declining ever since. It finally rebounded from 2016-2020 after President Trump took office and the US economy began to truly flourish, prompting an attempted Fed rate hike to cool things down in late 2018.

This, along with many other factors, has made gauging the true health of the labor market a very difficult task. It’s also made the Fed’s job just that much more complicated.

And so, given today’s report, the Fed likely has the evidence it needs to start really turning up the hawkishness. Full employment has been exceeded. By the Fed’s standards, the “going is good.”

The question now is:

When will the rate hikes “get going?”

March seems like a good time to start, right when the Fed’s taper ends and a potential bear market reversal begins.