It was all good news this morning for the market as investors learned another $1 trillion in stimulus could be on its way. A record jump in monthly retail sales and successful coronavirus treatment trial boosted shares, too, overshadowing North Korea-South Korea tensions as well as a scuffle at the India-China border.

The Dow, S&P, and Nasdaq Composite all soared at the open in response to the positive headlines. Never mind the fact that North Korea just blew up a South Korean building in an important border town between the two nations. Nor that three Indian soldiers were killed in a dust-up with China.

The prospect of another armed conflict doesn’t really matter to bulls these days. Instead, the reopening of the U.S. economy, and any data that indicates it’s going well, steals the show.

The U.S. government revealed a May retail sales boom earlier today, giving investors just what they wanted. Last month, retail erupted for a 17.7% increase in sales from month-to-month, blowing away the 8% consensus estimate.

Then, news broke that dexamethasone – a cheap, widely available steroid used to treat inflammation – successfully reduced Covid-19 deaths by up to one third in hospitals.

“A potential Covid steroid treatment in the UK combined with record retail sales and news of additional stimulus has been met with unbridled optimism,” Mike Loewengart, a managing director at E-Trade, said.

“We’ve been used to seeing record lows in economic fundamentals over the past few months and to see the pendulum swing so far in the other direction is nothing if not encouraging.”

The cherry on top, though, was President Trump’s new $1 trillion infrastructure stimulus plan. Bloomberg News reported that a proposal is currently in the works, and funds would be reserved for roads, bridges, and even 5G network deployment in the near future.

POTUS wants America firing on all cylinders when the pandemic ends. An infrastructure stimulus program would certainly grease the wheels of productivity.

And everything was going great for bulls, right up until the true driver of the market – the Federal Reserve – made a sobering statement about its corporate bond-buying strategy.

“It’s out of an excess of caution to preserve these gains for market function by following through,” said Fed Chairman Jerome Powell before Congress this morning.

“I don’t see us wanting to run through the bond market like an elephant snuffing out price signals, things like that.”

Powell’s remarks highlight two things that have, historically, not gone together; the Fed and its ability to show restraint.

The current Covid-19 stimulus is by all definitions a true “runaway train” at this point. Individual corporate bond-buying, which the Fed claims it will do carefully, could quickly snowball into a much larger purchasing plan over the next few quarters.

But even then, it’s likely to be just a small part of the already historic stimulus injected into the economy. 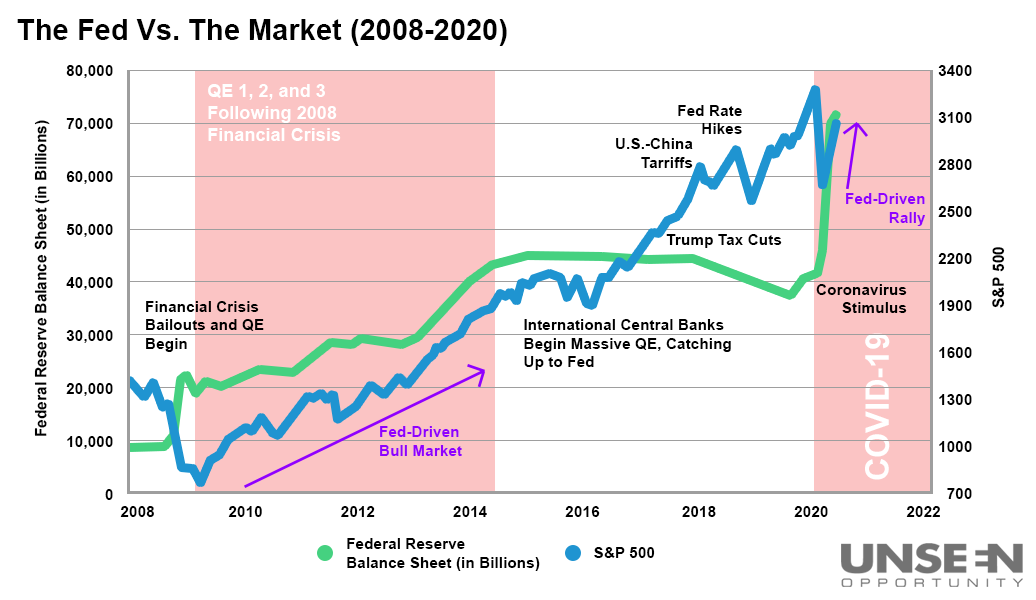 Since the market bottomed in March, the Fed has almost single-handedly propped up stocks via massive additions to its balance sheet. The central bank made the same moves under former Fed chairs Ben Bernanke and Janet Yellen following the 2008 Financial Crisis, albeit over a longer period of time.

The strategy worked in 2009, but at the behest of economists who claimed stocks were primed for a collapse when the quantitative easing (QE) ended and quantitative tightening (QT) began.

By 2015, the market had cleared its previous highs, and QE in the U.S. finally ceased. In 2016, the market rose higher on hopes that Trump would be elected.

Instead of taking a pause, though, the other central banks of the world began massive QE campaigns of their own. It wasn’t until late 2018 – almost 10 years following the first round of QE – that the Fed, under the guidance of Powell, attempted to increase rates and bring about QT amid a strong economic climate.

The results were nearly disastrous. Powell’s gambit proved that once an economy gets on the “QE treadmill,” it can’t get off. Following the rate hikes, the market plunged alongside business investment, signaling to many economists that a recession was coming.

All because Powell had the audacity to put a nearly decade-old round of stimulus “back in the bottle.” Thankfully, the U.S. economy was robust enough to continue growing and shake off the effects of QT. Record-low unemployment, a strong consumer, and rate cuts juiced equities.

Then, the unimaginable occurred a few months ago when the coronavirus pandemic hit the West. The U.S. economy and stock market were stunned.

Right on cue, the Fed came to the rescue once more, spurring on a Fed-driven rally with massive liquidity and stimulus provisions.

These days, earnings no longer dictate share prices in the short-term. Economic reports, though encouraging, aren’t the final word in which direction the market is headed long-term, either.

The Federal Reserve is.

And after almost 11 years of QE, from sources both domestic and otherwise, that’s not likely to change any time soon. Especially now that the world is fighting Covid-19.

Once the stimulus bonanza ends, so too will the post-crash rally, in what could be a tremendous drop due to a sudden lack of liquidity – the very thing that the Fed simply cannot let happen, but ultimately will have to, when (or if) it steps out of the market.