Stocks are flat this morning after the release of the December jobs report. Nonfarm payrolls fell by 140,000 last month, which was a major disappointment given that Dow-polled economists expected a 50,000 job gain.

Unemployment held steady at 6.7% while lockdown-sensitive industries bore the brunt of the damage. Both hotels and restaurants were unsurprisingly hit the hardest. Thankfully, the number of permanent job losses fell in December, but if Covid cases continue to rise, those temporary losses could quickly flip into the permanent variety over the next few months.

Because of that, investors aren’t impressed. But they’re not pouting, either. With infection totals surging across the globe, you’d think the market would drop in response to the news.

Today, that’s simply not the case.

The promise of stimulus and a smooth White House transition has traders feeling somewhat upbeat despite December’s jobs report setback. But “Main Street” investors – retail traders like you and me – aren’t really participating in the bullishness. In a report released just a few hours ago, Bank of America strategists revealed just how much Wall Street is truly running the show. 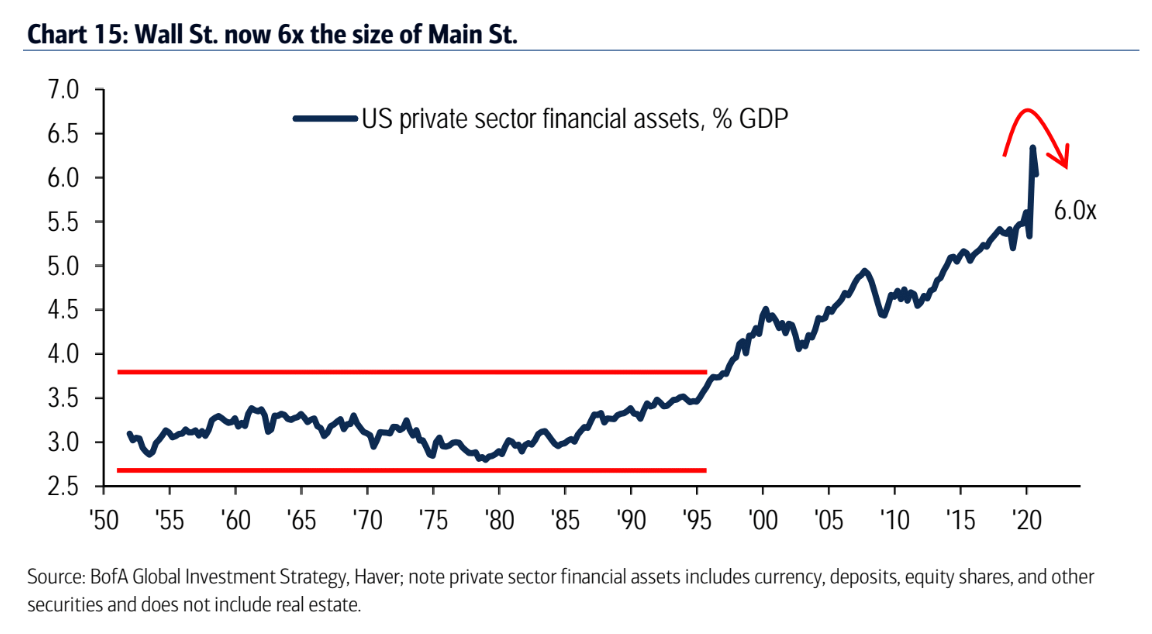 As it stands, professional investors and institutions hold 6x more private sector financial assets than Main Street, a near record-high. In 2020, it was even worse. The trend of Wall Street dominance went parabolic last year, and it could continue to do so in 2021.

It’s a far cry from how things were pre-1995 when Wall Street controlled less of the market and the multiple remained below 4x for 45 years straight. That all changed, however, with the run-up to the Dot Com Bubble from 1997-2000. Ever since, Main Street has become increasingly disillusioned with stocks while Wall Street’s picked up the slack.

But among the different bubbles that have emerged over the years, Dot Com wasn’t all that bad. Yes, it certainly looks ghastly all on its own. Compared to other buying frenzies, though, the Dot Com Bubble was relatively small potatoes. 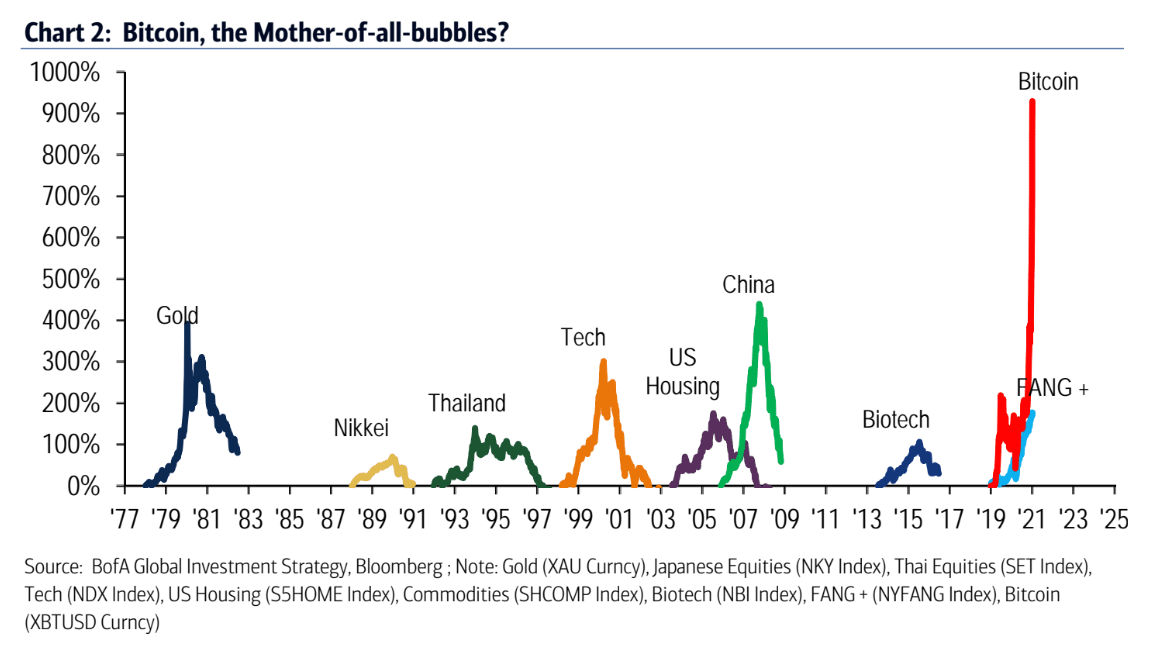 Gold, China, and Bitcoin – which Bank of America analysts are now calling a bubble, too – all beat the Dot Dom rally in terms of trough-to-peak gains.

Bitcoin is the only bubble listed that has yet to pop. The current stock market rally could arguably be included as well, given that almost 60 S&P 500 stocks are trading for more than 10 times their revenues. The previous high in that regard was 44, back at the top of the Dot Com Bubble.

Unlike in 2000, however, Wall Street shouldn’t let stocks slip into a 3-year downtrend this time. A nasty short-term correction seems probable in the near future, but now that the Fed looks intent on providing “helicopter money” indefinitely, the post-2009 bull run (not adjusted for inflation) may never end.

That same argument could be made for Bitcoin, too, given that institutions have begun buying in a major way. Wall Street’s stranglehold on crypto may only be getting started.

As a result, Bitcoin’s current valuation of roughly $41,000 could be considered a bargain by the end of the year.

On a typical chart with the default linear scale, the holiday Bitcoin surge appears astronomical. But when applied to a logarithmic scale, which plots two equal percent changes as the same vertical distance, Bitcoin’s most recent blast higher isn’t all that impressive. The 2017 rally covered far more ground in less time.

And, with a wider view going back to 2012 (in the chart above), the standout highs suggest that Bitcoin could even touch $240,000+ in the coming months. That’s not to say it will be smooth sailing the whole way, but Bitcoin’s long-term uptrend certainly looks well in hand.

If Bitcoin doubled from its price today and went to $82,000 by mid-2021, analysts would collectively lose their minds.

If you go back further, though, you can see that Bitcoin’s current price isn’t too far past its 2017 high, logarithmically speaking.

Is that guaranteed to happen? Absolutely not, but the potential is there.

My advice: don’t be surprised if that price level is eventually eclipsed, and sooner than most would have expected. That means buying the next dip might be wise.

Regardless of how many Wall Street analysts call it “just another bubble.”