The S&P and Nasdaq Composite are up. The Dow’s down.

And investors aren’t quite sure what to make of the current economic situation.

Stocks opened higher this morning after a coronavirus vaccine candidate from Pfizer and BioNTech showed it could create “neutralizing antibodies” in a recently conducted study. The results have yet to be reviewed by a medical journal, but given Pfizer’s stature in the industry, the claim is likely credible.

“We are encouraged by the clinical data of BNT162b1, one of four mRNA constructs we are evaluating clinically, and for which we have positive, preliminary, topline findings,” said Kathrin Jansen, Pfizer’s head of vaccine research and development.

“We are dedicated to developing potentially groundbreaking vaccines and medicines, and in the face of this global health crisis, we approach this goal with the utmost urgency.”

“Mad Money” host Jim Cramer believes that the vaccine could be enough to push equities higher.

“This is highly unlike Pfizer,” he said.

“I, frankly, don’t want to accept it like this, but the market will and it’s kind of a saved-by-Pfizer market from where we were.”

Adding to the excitement was a report from ADP and Moody’s Analytics, which found that 2.37 million payrolls were added in June. The two data firms also revised May’s 2.76 million jobs loss to a 3 million jobs gain.

Overall, it was mostly good news, even with coronavirus cases spiking across the country. 12 states have either walked-back or paused reopening plans. Arizona experienced a daily record in new infections and deaths to boot.

Still, though, Covid-19’s mortality rate is dropping as more cases arise – something that could eventually tip sentiment in the favor of bulls should mortality fall low enough.

That doesn’t mean, however, there will be less uncertainty in July. Investors seem to be expecting it and are loading up on defensive stocks – like utilities – as a result.

Which, based on the SPDRs Select Sector Utilities ETF’s (NYSE: XLU) surge today, could be indicative of a larger movement.

And a great long setup for short-term traders. 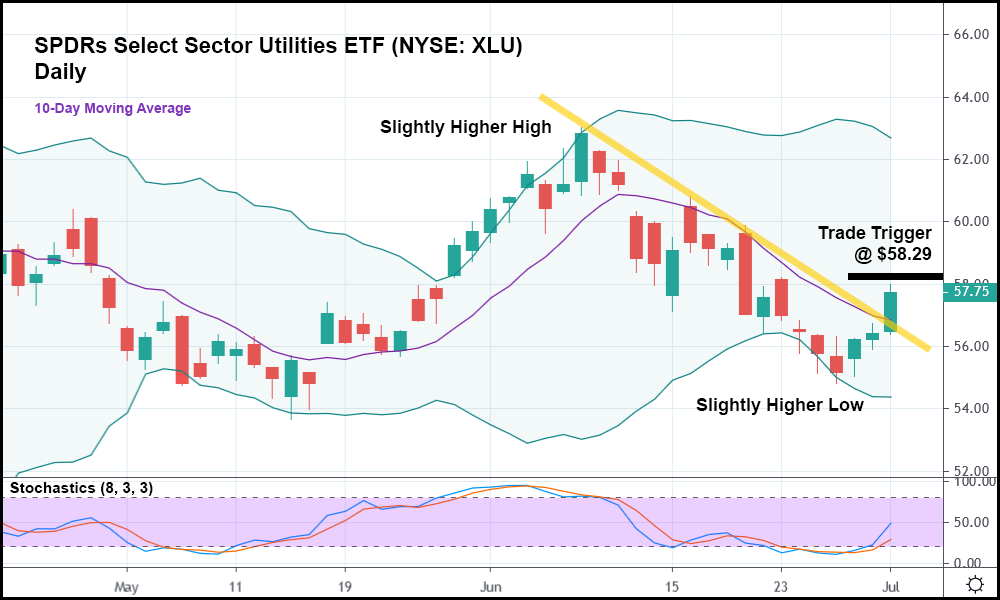 XLU has certainly ebbed and flowed over the last few months. The ETF peaked in April, fell in May, and then peaked again early June, setting a slightly higher high.

Since then, XLU’s sold-off, bottoming out at the lower Bollinger Band (BB) and setting a slightly higher low.

Today, the ETF blasted above both the 10-day moving average and its minor bearish trend (represented with the yellow trendline). Should XLU trade above today’s high, it might make sense to go long with a trade trigger of $58.29.

Best of all, even if the market falls, XLU could still rise. Or, at the very least, not decline as harshly.

This trade setup is a welcome sight for traders trying to time the market. Defensive sector ETFs, despite being defensive in nature, are still capable of impressive gains.

XLU did very well from mid-May to early June, and it could very well make a similar run in July, too.