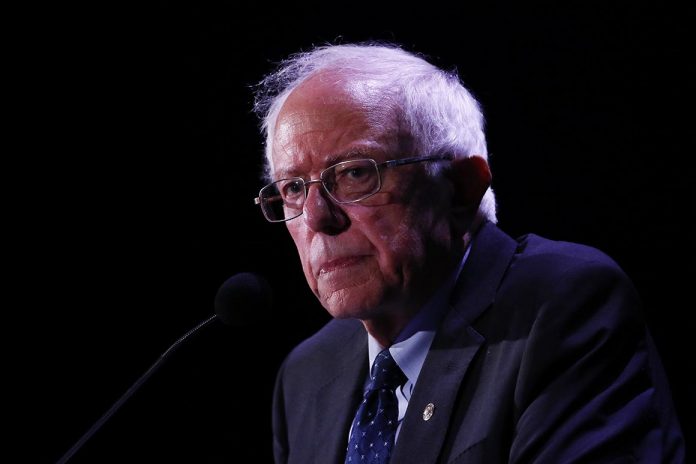 Just a week after Elizabeth Warren debuted her student loan reduction plan, Bernie Sanders fired back with one of his own, outdoing Warren’s comparatively modest offering by leaps and bounds.

In the “Sanders Plan”, every single college debt-laden American will be forgiven, erasing the country’s $1.6 trillion student loan burden with a single piece of legislation.

So long as you’re not the one footing the bill.

In this case, Sanders wants to invoice investment firms by placing a new tax on any and all transactions generated by Wall Street, which may as well be one of the four horsemen in Bernie’s eyes.

By raiding “The Street”, Sanders hopes to end “the student debt crisis” (his words, not mine), going several steps further than Warren’s $50,000 loan forgiveness program.

After all, student debt has now eclipsed credit card and auto loans. The average student leaves college (some don’t even graduate) $30,000 in debt, and 28% of borrowers have fallen into either delinquency or default.

Doesn’t it just make sense to level the playing field by eliminating student debt in one fell swoop?

And don’t forget; Wall Street has profited (and continues to profit) off us “little people”. It’s high time for comrade Sanders to take them to task.

But wait, it gets better.

“This is truly a revolutionary proposal,” Sanders said in a Washington Post interview.

“In a generation hard hit by the Wall Street crash of 2008, it forgives all student debt and ends the absurdity of sentencing an entire generation to a lifetime of debt for the ‘crime’ of getting a college education.”

Supporting his new plan are representatives Ilhan Omar (D-Minn.) and Pramila Jayapal (D-Wash), who serve as co-chairwomen of the Congressional Progressive Caucus.

And while big investment firms would certainly “feel the Bern” on this one, retail investors could end up getting hammered as well.

Even if they aren’t taxed directly (however, they likely will be).

Imposing a 0.5 percent tax across the board on every stock transaction would have a downright devastating effect on the market. The late 2018 correction, which was caused in large part by the Fed’s September interest rate hike, would look like a “road bump” by comparison.

In fact, you could even argue that the net effect of a stock transaction tax would in many ways resemble an interest rate increase – perhaps the largest of all time.

When interest rates rise, companies that hold debt (almost all of them) get their margins slimmed in the process, because that debt becomes more expensive.

With a stock transaction tax, any company that holds equity (almost all of them) will get slashed to ribbons in a similar manner. But it won’t stop with just fundamental valuations.

No, institutional investors will be taxed for their transactions too. And don’t forget, many of them are publicly traded. Remember what happened in 2008 to Lehman Brothers?

Retail investors, even if they’re excluded from the new tax, would suffer greatly as the market starts to shed value – leading up to a $1.6 trillion drop (or more) over time as the dominos fall with increasing velocity.

At that point, an interest rate hike would seem like a vacation from the chaos of stock transaction taxes.

So, while Sanders may have his heart in the right place, the fact is that “solving” America’s student debt problem in this manner would simply be counterproductive. Yes, I get it, Wall Street is the ultimate evil to Bernie and his supporters.

But in the end, the creation of capital is America’s greatest tool in ensuring continued prosperity.

It always has been, and if Sanders wants to tax one of our core strengths further, there could be hell to pay. In fact, there likely would be.