The bulls made a slight comeback this morning. But have they already gone too far? The Dow and S&P rose through the trading session’s early hours while the Nasdaq Composite remained unchanged.

It’s not a huge lift like the one investors were treated to on Monday, but it could be confirmation that the market isn’t quite ready to dip.

Because with vaccines from Pfizer (NYSE: PFE) and Moderna (NASDAQ: MRNA) on their way, it’s only a matter of time until Covid-19 is defeated.

Well, maybe, maybe not. In terms of infections, the coronavirus should eventually peter out. However, the economic damage (and the damage to fiat currencies, in particular) could be long-lasting. Fed Chairman Jerome Powell recently said that the U.S. economy isn’t recovering as it should.

And, without stimulus from Congress, it could easily stagnate.

Powell’s building up an argument to uncork another massive round of quantitative easing (QE). With case totals rising by the day and states reimposing lockdown conditions, he’s got plenty of ammunition to work with.

The problem is, the U.S. dollar could pay dearly for the Fed’s “economy saving” maneuver when it eventually comes.

That doesn’t matter to Wall Street strategists, though, who remain staunchly bullish. Bank of America’s November Global Fund Manager Survey revealed as much when it was published this morning.

In response to the findings of the report, BofA Chief Investment Strategist Michael Hartnett said it was “the most bullish Fund Manager Survey (FMS) of 2020 on the back of vaccine, election, macro,” and that fund managers hit a “20-year high in GDP expectations, big jump in equity, small cap & EM exposure.” 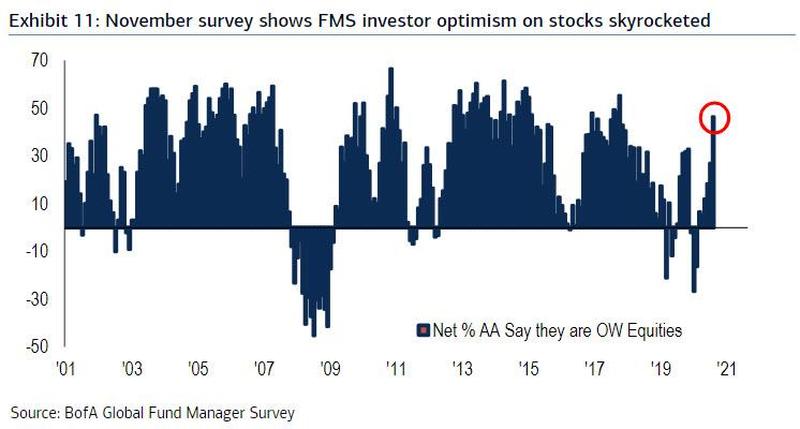 Those fund managers don’t see any reason to sell with QE virtually promised by the Fed.

That has Hartnett worried.

In fact, he even told clients to “sell the vaccine” in the coming weeks due to the market going “full bull.” Hartnett believes stocks simply can’t sustain their current rally.

And based on another interesting chart included in BofA’s report, he might be right: 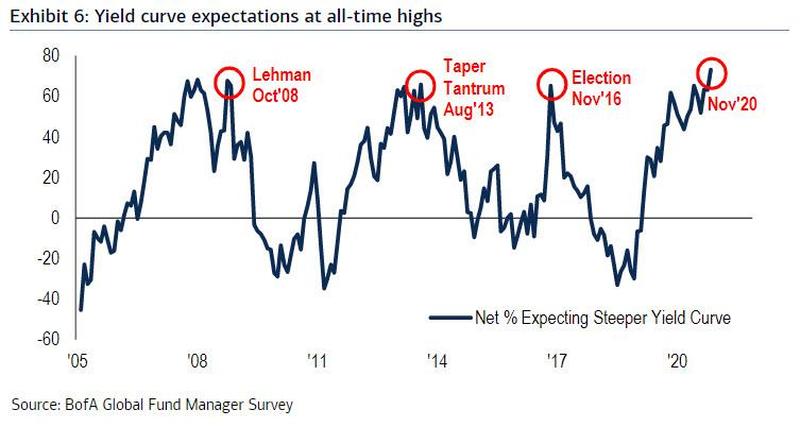 The last few times fund managers expected a steeper yield curve (where the spread between long- and short-term interest rates widens) a recession has followed. The yield curve often steepens when investors believe the Fed will provide policy response to combat growth weakness.

BofA’s report also showed that the rotation out of growth and into value could be for real this time. Emerging markets, small-cap stocks, and banks were among the most popular sectors with the fund managers surveyed.

The Dow’s dominance over the last week and a half suggests a shift is taking place, too.

So, like as always during the Covid-19 bull run, the working strategy is to stay long but with “one foot out the door.”

An equity crunch, via either a national lockdown or dollar plunge, could be here soon.

It’s probably a good idea to lap-up some easy vaccine gains (alongside everyone else) until one truly arrives.