Stocks rallied this morning as investors bought yesterday’s dip with great ferocity. The Dow, S&P, and Nasdaq Composite zoomed higher through noon. The S&P even traded above yesterday’s high temporarily.

This morning’s buying frenzy seemed to be driven by traders attempting to load up on the market’s top names ahead of earnings. Hasbro (NASDAQ: HAS), Johnson & Johnson (NYSE: JNJ), and IBM (NYSE: IBM) all reported their quarterly results before the market opened today. HAS and JNJ posted small “beats” while IBM suffered a major earnings “miss.”

Earnings season has been a mixed bag thus far. HAS, JNJ, and IBM did little to change that. And though some investors think the bottom may be in, most of Wall Street remains highly pessimistic.

In fact, Bank of America’s Fund Managers Survey (released this morning) showed that money managers haven’t been this bearish since 2008. 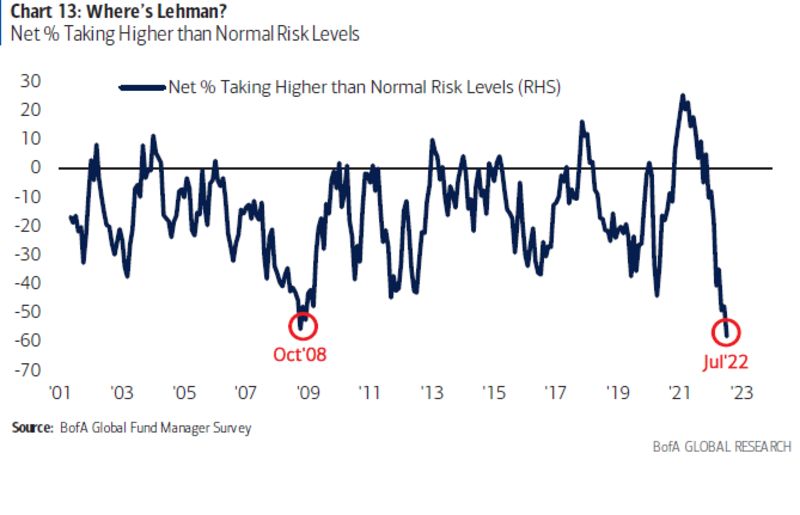 The survey includes 529 participants with $722 billion in assets under management through the week of July 15th. The top concern among survey respondents was inflation followed by a global recession and hawkish central banks.

A quick glance at B of A’s chart makes it seem like that, back in 2008, plunging survey sentiment was a good contrarian indicator. However, following the October 2008 survey, the S&P fell another 20% over the course of almost 5 months.

Yes, the survey predicted that the bottom was on its way, but it took nearly half a year for it to arrive. Is the market approaching a similar conclusion this time around?

“Stocks have been beaten down. That doesn’t mean we won’t see more downside for some stock markets around the world, especially given that earnings expectations are likely to be adjusted downward,” Hooper explained.

“But I believe we are far closer to the bottom than the top — and meaningful positive catalysts could present themselves in coming months.”

The most meaningful, positive catalyst of all would be a halt to Fed rate hikes in response to economic slowdowns. Inflation would probably remain a major problem if this happened, but it would also spark a massive rally (unadjusted for inflation, at least).

Recent comments from corporate leaders have done little to suggest that the US economy can avoid a nasty downturn.

“Elon Musk recently announced he would cut 10% of jobs in Tesla because he has a bad feeling about the economy,” said Ipek Ozkardeskaya, senior analyst at Swissquote.

“Alphabet, Amazon, Meta, Snap, and even Goldman announced they would need less people to work for them as businesses would slow.”

Bloomberg reported yesterday that Apple would reduce hiring and spending next year, causing a major bearish reversal into yesterday’s close. It could be argued, however, that continued revisions like Apple’s should only improve the chances of the Fed ending its rate hikes.

Does that mean “bad news is good news” is back on the table? Perhaps. But with another FOMC meeting approaching on July 27th, much could change in that regard. The Fed might surprise the market with a bigger-than-expected rate hike.

If it does, you can kiss the bear market rally goodbye as stocks march to new lows once again.