Stocks traded higher this morning opposite a disappointing monthly consumer sentiment print. As has been the case since the pandemic began, underwhelming data seems to provide buy signals for eager bulls. The S&P touched a new all-time high shortly after the market opened despite the surprising sentiment slump.

It was the July University of Michigan’s Consumer Sentiment Index (released pre-market) that revealed the pullback in consumer confidence. Headline sentiment dove from 81.2 to 70.0, falling beneath even the April 2020 lows. In fact, last month’s consumer sentiment reading was the lowest since early 2012. 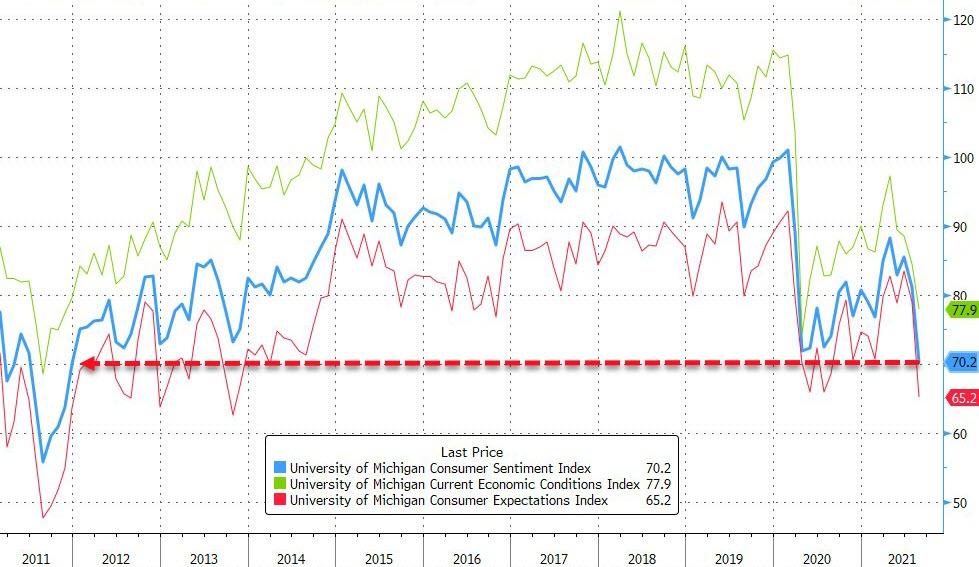 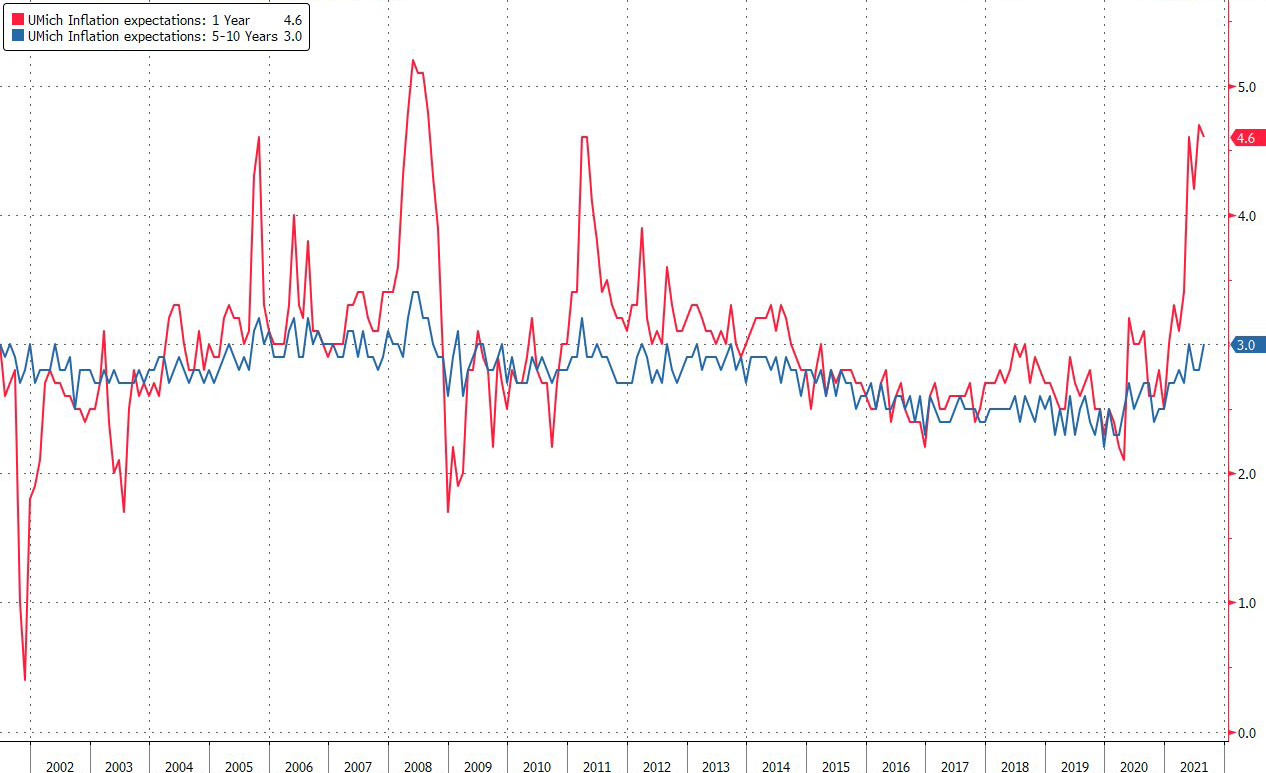 Over the next year, consumers anticipate that inflation will hit 4.6%. That’s down slightly from June’s reading. But over the next 5-10 years, consumers now expect a 3.0% inflation rate, up from May and June’s 2.8% prediction.

“Consumers have correctly reasoned that the economy’s performance will be diminished over the next several months, but the extraordinary surge in negative economic assessments also reflects an emotional response, mainly from dashed hopes that the pandemic would soon end,” wrote Surveys of Consumers chief economist Richard Curtin.

Curtin did, however, end his commentary with a hopeful twist:

“In the months ahead, it is likely that consumers will again voice more reasonable expectations, and with control of the Delta variant, shift toward outright optimism.”

Curtin’s probably right. The University of Michigan conducted the survey right around the same time Delta variant cases were spiking in the US and abroad.

More recently, analysts have grown bullish (or at the very least, less bearish) about the Covid resurgence in the US. JPMorgan’s top strategist Marko Kolanovic went so far as to say that daily cases have already peaked and should only decrease moving forward.

“Given the strong earnings season, market positioning, signs of receding Covid-19 Delta variant in the US, and normalization of bond-equity correlation, we remain constructive,” he explained in a Thursday note to clients.

Kolanovic has been notoriously bullish on value stocks in the past. Almost two years ago, he said a “once in a decade” event was approaching following the September 2019 repo market crash. Kolanovic estimated at the time that value shares would beat the general market by a wide margin for years to come. And though his prediction initially seemed correct, the Covid-19 pandemic ended up crunching value shares several months later in March 2020.

Ever since, growth has “ruled the roost,” posting some downright gaudy returns compared to value since the start of the pandemic.

“In particular we like cyclical and reflation-linked market segments, and are cautious on beneficiaries of lockdowns and low bond yields,” he said.

“In fact, we believe that bond yields and cyclicals bottomed last week and are now on an upward trajectory for the rest of the year.”

This commentary came prior to the release of the July Consumer Sentiment Index. But it’s unlikely that last month’s plunge in confidence had any major effect on Kolanovic’s outlook. He, like Curtin, also believes that consumers overestimated the Delta variant’s true impact.

For that reason, JPMorgan remains bullish. So too does the rest of Wall Street. That means, as usual, selling right now might be a little premature.

But it did little to ding sentiment as stocks roared through the close.

Will July’s Consumer Sentiment Index report be ignored in the same manner? Probably. And until this relationship changes, staying long on equities will continue to be the winning move.

Even with market valuations looking increasingly overstretched from both a technical and fundamental point of view.